The members of the nowadays very popular pop punk band called 5 Seconds of Summer are big fans of tattoos, though Luke Hemmings still hasn’t got any. Why? We can guess. However, the youngest member was rumoured to be getting a tattoo about half a year ago, when he was seen in a tattoo shop with his bandmate Michael and the fans were buzzing. Anyway, the speculations were false and the fans can do nothing more than hope.

Calum has the most tattoos within the band. He has a feather tattooed under his right collar bone. Feathers are known to symbolize very positive things, such as hope, freedom, dreams, magic, truth, purity and ispiration.

Michael has a tiny anchor tattooed on his thumb. An anchor is one of the oldest symbols used in tattoos. In rough seas an anchor is a sailor’s last refuge, hope that things can get better. Furthermore, the symbol means loyalty, dedication, protection and enlightenment. 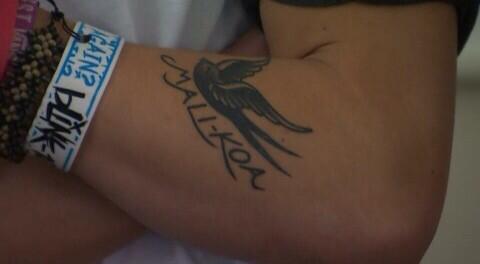 Regardless of how miserable you feel, nothing pulls you out of a foul mood faster than the pleasant chirps of a bird. Calum has a bird on his forearm and under it, he has the name Mali-Koa, which is his sister’s name. Birds also symbolize family, beauty and love.

This is probably the most recent of Michael’s tattoos. Nine months ago, Clifford’s mother Karen posted this picture on her Instagram. It’s symbol from a video game called Final Fantasy and it means ‘home’. Also known as the original 5SOS symbol. The tally has been removed from the band’s logo by now, in regards of copyright. However, amongst the fans it remains the symbol they associate with 5SOS. Loads of fans even have a tattoo like this themselves!

What do you think about our choice of the boys’ most important tattoos? Let us know in comments below or tweet us at @CelebMix!