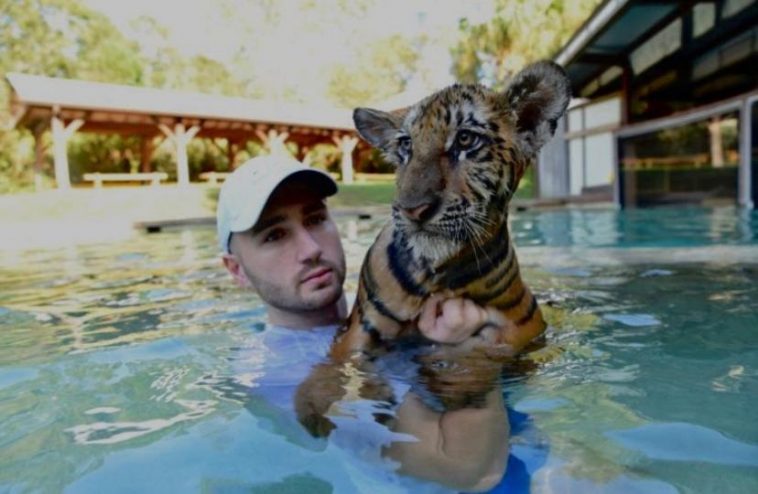 Steven Dorn is a cultural curator and life-long entrepreneur who is focusing on making a difference. Dorn sits at the intersection of many popular industries — like music, entertainment, basketball, and film — building companies, his network, and cultural cachet in all of these spaces. Dorn is the best in the business when it comes to delivering a culturally relevant message in a highly entertaining and interesting package. When Netflix’s smash hit “Tiger King” took the public’s interest by storm last year, this caught Dorn’s eye as well. Dorn wanted to capitalize on the massive interest of the subject, however due to personal experiences with the tiger conservation industry, he wanted to focus on the truth and help dispel some of “Tiger King’s more outlandish claims.

This is precisely why Dorn, and his production company Couch King Productions, filmed their own docu-series, “Tiger Kingdom,” to explain Tiger King’s lies and to highlight Doc Antle’s positive and essential work in the industry. The film perfectly fluctuates between interviews discussing exotic’s gross mistruths, beautiful shots of Antle’s impressive Myrtle Beach Safari complex, and personal moments with the tigers, cheetahs, wolf puppies, eagles, elephants, monkeys, chimpanzees, and liger on the premises. Brilliantly pairing serious topics with gorgeous footage, Dorn has a sure-fire hit, with an important message, with “Tiger Kingdom.”

Most of the docu-series focuses on the essential — and fun — work Doc Antle and his team does at the Myrtle Beach Safari, the Ritz Carlton of tiger sanctuaries. While the series discusses all the fun activities visitors of the Safari can experience, it mostly focuses on the purpose and the reason behind this safari, tiger conservation. The Myrtle Beach Safari actually plays a crucial role in funding Doc Antle’s tiger and wildlife conservation center, Soraya Station. Located deep in Sumatra, the station’s mission is to protect tigers from human-caused dangers and objects left in the forest. The station is home to a large group of rangers dedicated to searching the forest for snares, removing them and any other such objects. Of course, the station hosts a group of scientists researching how best to protect the tigers in the wild. The Myrtle Beach Safari also helps fund Antle’s work at The Institute for Greatly Endangered and Rare Species (T.I.G.E.R.S.).

Antle’s deep appreciation for and focus on tiger conservation is one of the reasons why he was so offended by some of Exotic’s claims. Antle feels as though the original documentary did far more harm than it did positive. Beyond making the industry look like a bit of a racket, “Tiger King” perpetuated gross and dangerous lies about Antle and his team claiming that they euthanize their cubs as well as treat the animals at their facilities poorly in general.

Of course, Antle and his staff vehemently deny this terrible lie; there is absolutely no truth to the claim that they euthanize their cubs. This rumor actually seems to have been started by Joe Exotic himself in a desperate plea to somehow get out of jail by defaming other people’s character. There is a reason why Exotic is behind bars and Antle owns and operates facilities with pristine conditions and healthy and happy animals.

Antle’s staff illustrates how facilities like Myrtle Beach Safari are actually able to save more tiger cubs than if the cubs were in the wild. As apex predators, female tigers typically only let one or two of their cubs, out of a larger litter of around eight, nurse from her body, effectively leaving most of her tiger cubs to die on their own. This unfortunate product of evolution, coupled with the fact that many tigers do not have multiple litters a year, means that the wild tiger population is dwindling without an obvious way to replenish it.

This is exactly why Antle’s team’s work is essential. By nursing and caring for the other 6 or so tiger cubs, left by the mother, Antle’s team is able to ensure that more tiger cubs live as long as possible. In the wild, about only 1/10 tiger cubs reach the age of 7, but in sanctuaries like Antle’s, the entire litter has a strong chance of living beyond 7 and into their teenage years.

Dorn’s new docu-series is not only entertaining, but it also contains an important message about the good-faith actors in the tiger conservation industry and highlights all of their important work. Especially after the damage done by “Tiger Kingdom”, a docu-series focusing on Doc Antle’s Myrtle Beach Safari and his conservation work is exactly what the industry needs. Dorn clearly illustrates Myrtle Beach Safari’s and Antle’s prowess when it comes to exotic zoos as well as how much they care about the animals’ well-being in the Safari and in the wild.
The film is attracting positive press from publications such as People, Elite Daily, and more.