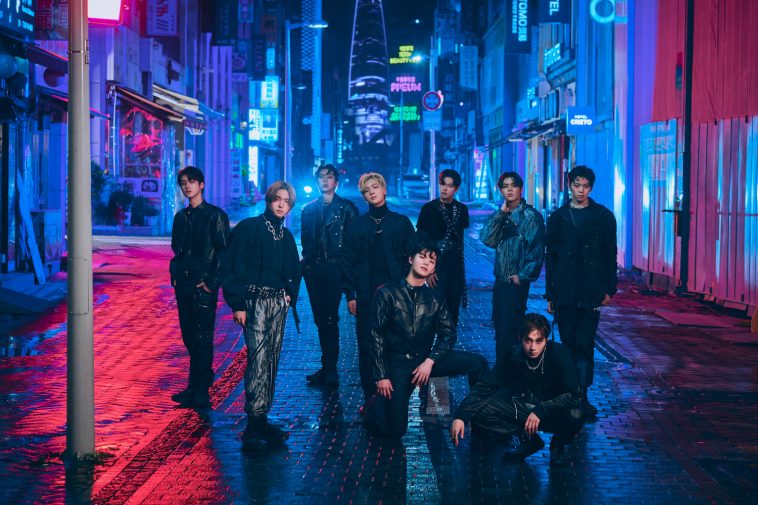 GHOST9 are making waves in the K-pop scene with the recent launch of their music video for “Think of Dawn” which has received millions of views on YouTube within days of its release. The band are now working on their debut album that will feature 6 songs and reveal the different sides of their personality, showcasing their unique perspective of the world – and introducing fans to their universe.

Consisting of 9 members, GHOST9 is a group with a variety of appearances, crossing reality and unreality, real and virtual.

GHOST9’s debut mini-album [Pre Episode 1: Door] is an album filled with six different songs with various colours that each showcase a different side of GHOST9. It is a prologue of GHOST9’s unique universe and it is the beginning of the remarkable world drawn by GHOST9.

The hollow earth theory has been one of the main inspirations behind GHOST9’s storyline. The theory states that the earth is a hollow shell. And the North and South Pole supposedly are sinks that lead to the interior of the earth. Playing on this theory, this ‘inner world’ is where the GLEEZ characters reside – nine animated characters who serve as GHOST9’s soulmates and companions. GLEEZ will tour the world and face new adventures alongside GHOST9, while telling their own stories through their own animated series, “GLEEZ THE WORKS”.

“CINEMATIC WORK : DOOR”, a 16-minute cinematic video reveals GHOST9 meeting their soulmate, and GLEEZ is a unique promotional video that also featured in a sci-fi film. It follows the story of nine boys, led by Lee Jin Woo, who witness an abnormal Earth phenomenon. After facing a red-eyed robot, they venture together to reveal its identity.

2. What inspired you to create the track “Think of Dawn“?

“Think of Dawn” is mainly inspired by our name GHOST9, in which when referring to the undead, midnight dawn time can represent our concept.

“Think of Dawn”, with nine members appearing after the dark fog of dawn has cleared, is a pop dance track based on hip-hop and dubstep styles with GHOST9’s soft and rough voice added to the strong beat of the drum and bass that makes the richness of this song come alive alongside a powerful performance.

We tried especially to show not only a small touch but also a more prominent formation. And we wanted to express signatures to the lyrics for each part. Please look minutely at the choreography that contains the synergy of the GHOST9 members in each frame to understand a little more!

3. Who do you look up to musically?

Our role model is Michael Jackson because of his eye-catching performances. From dancing, singing, and composing, we wish to be able to achieve even the slightest things he had achieved.

4. Can you tell us how it all started for you and what led you to launching this journey into music?

We all became one as GHOST9 through our common goal in pursuing music.

5. What do you love most about your fans and those that support your music?

It has only been just a few days since we started yet, the amount of love and support we have received is out of this world. We love and thank our fans for this reason.

6. What’s your favourite track on the debut album?

“Vision”, as you can hear our sexy voice on this track!

If you like a little loud song and turn-up atmosphere, you would appreciate “Reborn”.

Different from our title track, “Lay Back” has a calm and lyrical vibe that is easy to listen to, making it one of our favourite songs on the album as well.

And for “The Night Flight”, the mood of that song is totally different from “Think of Dawn”, so it might be attractive to listeners as well.

7. Your new music video for “Think of Dawn” has been very successful in just a few short days reaching millions of viewers. What has been the reaction so far?

The reaction we’ve received has been very surprising. We are honoured and glad that our music achieved this much in such a small amount of time.

8. Is there anything we should be looking out for in the coming months? Any exciting projects in the works?

It has only been a few days since our debut, so we’re sure that our fans would want to see more of us already. For that, we will work even harder with our stages and performances.