As Fall approaches, many shows are getting ready to air a brand new season. We were lucky enough to visit the Warner Brothers Studios in Hollywood and witness the atmosphere of a busy work and tour season.

The tour branched out in many directions; ranging from insight to how sets are built, to demonstrations of props in various movies. We had loads of fun on the trip, and every minute of the two-hour tour was definitely worth it.

Every aspect was highly enjoyable, but we managed to pull out five of our favorite parts of the studio tour. If you’re Batman or a Harry Potter fan, get excited. 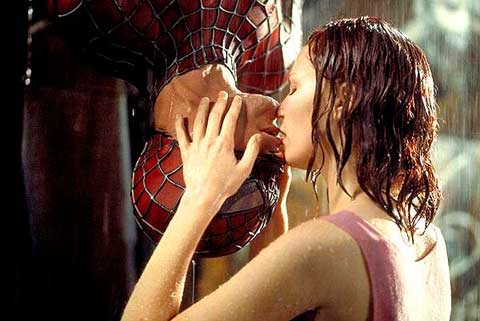 If you’re a fan, you know of the kiss Tobey Maguire and Kirsten Dunst shared in the original Spider-Man 2002 movie. If you’re not a fan, you still know of the infamous upside-down kiss in the rain. It’s a kiss that has gone down in history.

On the tour, we were very excited to see the very spot where the movie magic took place.

Our guide even let us in on a little a secret.

The rain during the kiss? It was really made with milk. Water wouldn’t have shown up on the screen as well as milk did. We are parts disgusted yet fascinated.

We saw the Tumbler, the Batmobile, the other Batmobile…

Basically all the awesome cars that started in the Batman movies.

It was very intriguing seeing all the cars in front of us and then getting thrown back to the action scenes these cars took part in. The coolest part was discovering that all the cars had working motors and actually drove. Imagine seeing the Tumbler as you make your morning commute.

It felt as if we walked right into Batman’s home.

3. The Tallest Sound Stage in America

Studio 16 may be just like any other sound stage… but it isn’t.

According to our guide, Studio 16 is the biggest sound stage in America – and is among one of the biggest in the whole world.

The large “WB” logo is proudly presented on the front of the sound stage and faces Universal Studios Hollywood, where everyone can see it.

What is the Archive? Well if you’re a DC or Harry Potter fan – this is the place for you.

The Archive was our favorite stop. The ground floor was dedicated to DC Universe while the top floor was entirely dedicated to the magical world of Harry Potter.

In DC Universe: The Exhibit, Original comic books were framed along the entrance and the hall was beautifully decked out with posters

Warner Brothers’ recent release, Suicide Squad, also had many features up on display. Harley Quinn’s hammer – the actual one she used in the movie – was there for all to see. It was a big treat.

Now for all you Potterheads out there who are still hyped over The Cursed Child release and the upcoming Fantastic Beasts premiere, you would’ve died just like we did when we walked up the stairs.

A variety of props from all seven Harry Potter movies were put out for our viewing pleasures, from original illustrations to the Golden Egg in the Goblet of Fire.

We also had a great time getting sorted by a real-life Sorting Hat.

The Archive was hands-down the best museum we’ve ever visited.

Now, we’ve already shared some of the many things we’ve had a great time seeing. As for the best part of the tour? The one experience that earned number one on our list?

To really get into the magic, the guide took us to an interactive sound stage. The final, and best, part of the tour was self-guided. We were able to proceed leisurely at our own pace, and trust us when we say we took forever admiring what the sound stage was like.

Are you a “Friends” fan? Well, visit the Warner Brothers Studio and take a picture on the actual set where Rachel worked!

The surprises kept coming, with more props from the DC and Harry Potter movies.

The biggest surprise was definitely the interactive green screens. Fans were able to ride their own Batmobile or broom and go on a wild adventure. We witnessed many people of all ages have a great time becoming a part of their favorite movies.

We would highly recommend attending the Warner Brothers Studio tour for your own good, or self-indulgence. Either way, it is an experience that is worth your time.

Tweet @CelebMix your pictures and tell us your experience if you’ve ever been! If you haven’t, let us know if this article changed your mind!