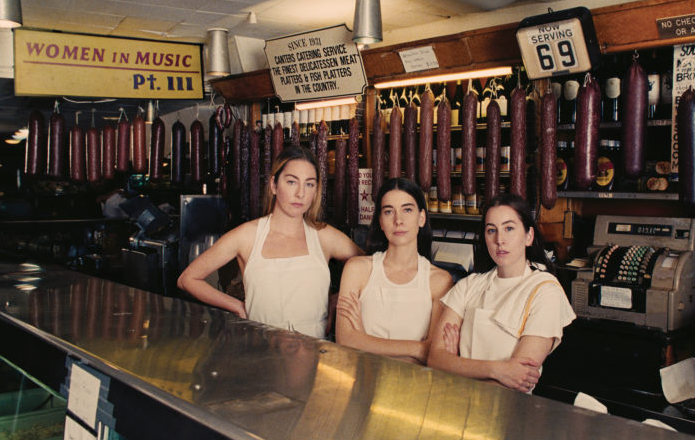 HAIM have recently released their new single “Don’t Wanna” – which will be featured on the group’s upcoming fourth album “Women in Music Pt. III.” The single is now available to stream on HAIM’s Spotify!

HAIM’s 16-track album “Women in Music Pt. III” was meant to be released back in April, however, due to the COVID-19 crisis, the band thought it was best to postpone the release until the summer. “Don’t Wanna” was premiered on James Corden’s “The Late Late Show,” where HAIM gave an unforgettable performance whilst in isolation.

We see HAIM all from their homes, with their equipment set up on the floor, putting on a sensational performance. Despite being in quarantine, they were still able to do the song justice. Trust us, they made it work. You can check this out below:

HAIM are constantly raising the bar with every release and we can’t wait for the album. The trio has confirmed that the new release date will on the 26th of June – so be sure to mark this date on your calendars!

Over the past few weeks, we have seen musicians and celebrities adapt to quarantine life – some are still entertaining their followers as much as they can. The LA sisters are no different. They’ve recently started a Zoom series where their fans can join them for dance classes. All you have to do to take part is enter your details here. From there, you will be invited to join them for a dance lesson where they will teach you some learn their choreography!

Make sure you stream “Don’t Wanna” now – believe us when we say that you won’t regret it. For more updates on the highly anticipated album and other future releases, follow the lovely ladies on Twitter and Instagram.

What did you think of “Don’t Wanna”? Are you excited for the new album? Let us know over our Twitter @CelebMix.