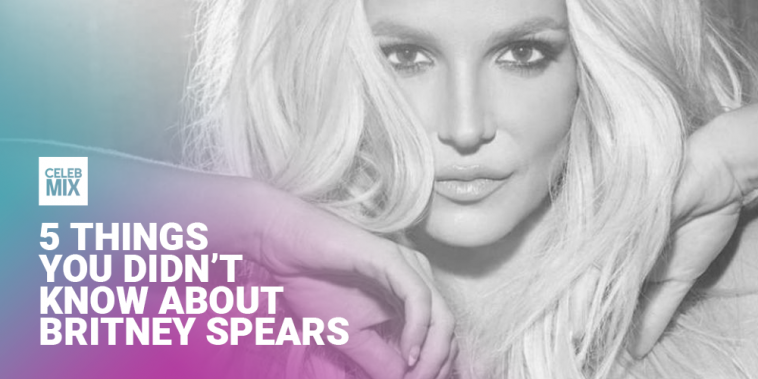 For this article, we have decided to share with you five facts you may not have known about Britney Spears!

For this article, we are focusing on Britney Spears, and the top five facts you may not know about her.

Although Britney had always dreamed of becoming a professional recording artist, she didn’t start out alone. Originally, she was a member of the girl group Innosense in 1997, alongside four other members. The group was put together by Lou Pearlman, who was responsible for boybands such as the Backstreet Boys and NSYNC. However, Britney was not a member of Innosense for very long before she later decided to leave. Shortly after departing, she would sign a record deal with Jive Records and begin work on her debut album.

Despite Britney’s departure, Innosense carried on, and after a couple of other line up changes, the group released their debut – and only – album, “So Together”, in 2000. The album’s lead single, “Say No More” (2000), hit #20 on the US Billboard Hot Singles Sales Chart. They even supported Britney on the North American leg of her “Oops!… I Did It Again” Tour that same year. Ultimately, the group did not find much success and after losing another member in 2001, they decided to go their separate ways in 2003.

It is crazy to think how different Britney’s career would have turned out had she not left Innosense…. would we still know who she is today?

2. Her two biggest hits, “…Baby One More Time” and “Toxic”  were originally intended for other artists

“…Baby One More Time” was originally written for R&B girl group TLC, however, upon hearing what the track was to sound like, they turned it down, stating it did not suit them. After they rejected the track, it was said to be pitched to a few other artists, including the Backstreet Boys and Swedish singer Robyn. Simon Cowell also revealed in his autobiography he wanted the song for British boyband Five, who he managed, but in the end these plans fell through.

“Toxic” (2003), on the other hand, was originally written with Kylie Minogue in mind. And to be honest, we can kind of see why. Although the song is perfect for Britney, it’s not far off from some of the uptempo dance tracks that Kylie was releasing back in the early 2000s. However, when presented with the song, Kylie turned it down.

3. She has her own holiday

A lot of people don’t seem to know this, and some fans may have forgotten that this is a thing – but it’s true, Britney has one day in the year dedicated to her!

In 2014, the Planet Hollywood Resort & Casino, where Britney performed her “Piece Of Me” residency between 2013-2017, declared 5 November to be “Britney Day” to celebrate Britney and her impact on the city.

Britney herself has also recognised the special day – she attended an event to mark the very first “Britney Day” in Vegas, and has also posted about the day on social media.

4. She used to have her own restaurant

While Britney has never been known in the world of entertainment as a celebrity chef, she did use to have her own restaurant, which was owned by five other business partners. Called NYLA, it was named after both New York and Louisiana – Britney’s home state. It opened in New York City in early 2002, and served authentic southern cuisine, with Britney taking influence from a restaurant she used to go to when she was a kid in her hometown of Kentwood.

NYLA was originally going to be called Pinky’s, which was a nickname given to Britney by Justin Timberlake. However, the two broke up before the restaurant opened, and Britney decided to change the name. Ultimately, it did not last long, and the restaurant closed within a year. However, we’re sure Britney still enjoys traditional Southern food in the comfort of her own home

5. She auditioned for “The Notebook”

The Notebook (2004) might just be one of the saddest romantic movies to come out of the 2000s. It stars Ryan Gosling and Rachel McAdams as a couple who fall in love in the 1940s, with the story being told in the present day by a man who reads it from a notebook (hence the film’s title) to a nursing home resident.

However, many do not know that Britney actually originally auditioned for the lead female role, and was in the running to get the part. The producers notably praised her audition, and the film’s director, Nick Cassavetes, stated that she was a lot better than some of the other actresses who tried out. Rachel McAdams, who was ultimately cast, revealed in an interview that she thought Britney would have done a ‘really good job’ had she got the role.

What is your favourite fact about Britney Spears? Let us know over on Twitter @CelebMix!