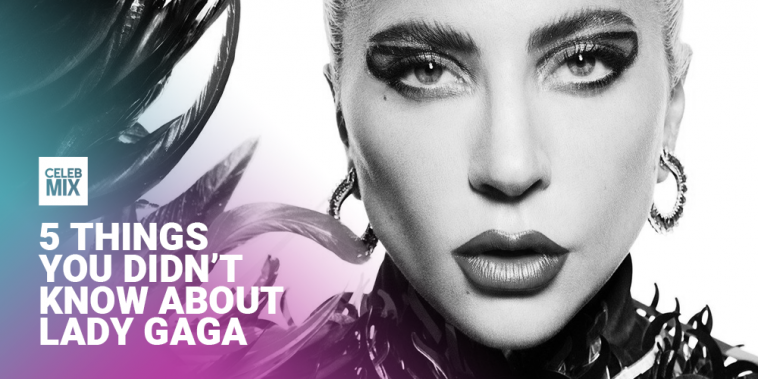 For this article, we have decided to share with you five facts that you may not have known about Lady Gaga.

1. She appeared on an MTV reality series before she was famous

Gaga got her first taste of fame back in 2005, when she made a guest appearance on the short-lived reality series “Boiling Points”, which was broadcast on MTV.

“Boiling Points” was a prank-based show, in which certain annoying situations were set up and inflicted upon young adults who were unaware they were being pranked. The subject will be watched via a hidden camera, and must display a level of anger towards what is happening in order to win $100.

In Gaga’s episode, she was dining at a restaurant when she had her food taken away from her and replaced with a slightly less appetizing meal. As you could expect, she lost her cool – although not enough to win the cash prize…

2. Her hit “Telephone” was originally intended for Britney Spears

Although Gaga wrote “Telephone” (2010), it was not originally intended to be released by her! Britney Spears had recorded the song for her sixth studio album, “Circus” (2008), but in the end it did not make the cut.

Later on, it was reported that Britney wanted to use the song for her greatest hits album, “The Singles Collection” (2009), but plans for this fell through and Gaga ended up recording her own version of the track featuring Beyonce for her second studio album, “The Fame Monster” (2009). The song was then released as a single in 2010 and became a pretty big hit.

A rough demo of Britney’s version eventually leaked online – it sounds pretty good, and we’d love to hear a fully mixed version! There is also plenty of fanmade mashups of Britney and Gaga’s versions together on YouTube.

3. She has a plant named after her!

Over the years, many new plants and fungus have been discovered – and one has been named after Gaga herself!

The plant, which is simply called ‘Gaga’, is a genus of 19 species of ferns, which are said to bear a close resemblance to the costume Gaga wore when she performed at the 2010 Grammy Awards. Two of the species have also been named ‘Gaga garmanotta’, after her real name (Stefani Germanotta), and ‘Gaga monstraparva’, in honour of Gaga’s fanbase, who she calls ‘little monsters’.

If that wasn’t enough, an extinct mammal also took its namesake from Gaga (‘Gagadon minimonstrum’) as well as a parasitic wasp (‘Aleidodes gaga’).

4. She was originally meant to tour with Kanye West

A Lady Gaga and Kanye West co-headlining tour is something that we often forget about – but it almost happened!

Fame Kills: Starring Kanye West and Lady Gaga was scheduled to kick off on 10 November 2009 and end on 24 January 2010, with 34 dates planned across the United States and Canada. It’s possible the tour would have visited other countries had it been a success.

However, the tour was cancelled, following Kanye’s controversial outburst at the 2009 MTV Video Music Awards, in which he interrupted Taylor Swift’s speech when she won the award for Best Female Video. The reason for cancellation was never officially confirmed, although it was rumoured that Kanye’s antics lead to the tour being ground to a halt before it started. In November 2009, Gaga instead embarked on her own solo tour: The Monster Ball.

5. She was meant to perform in space!

Back in 2013, Gaga announced that she would be the first musician to perform in space in 2015, abroad a Virgin Galatic ship which was to be beamed to the Zero G Colony festival in New Mexico.

However, the shuttle that she was meant to perform in unfortunately crashed during a test run in 2014, resulting in the deaths of several people. Gaga subsequently sent her condolences to the families of those who lost their lives.

It’s a shame the performance could not happen, as we think it would have been epic! We guess it just wasn’t meant to be in the end.

What is your favourite Lady Gaga fact? Let us know over on Twitter @CelebMix!