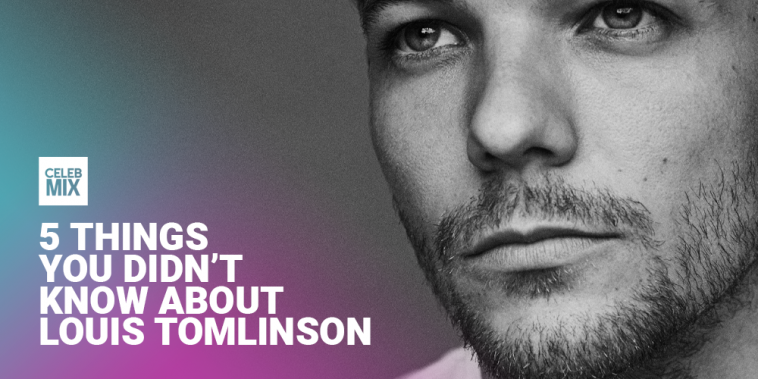 CelebMix is celebrating turning five…. so to celebrate we thought we’d find five facts about Louis Tomlinson that you might not know!

At the age of 11, Louis entered his school talent show which was held to raise money for Comic Relief’s Red Nose Day. A charity the Kill My Mind singer would go on to support many times as he got older. In the talent show, Louis dyed his hair red for the occasion and played an inflatable air guitar while singing a cover of Busted’s Year 3000. One Direction later did an impromptu cover while filming their concert movie, but sadly the HQ footage never made the final cut.

While still at school Louis did his work experience placement at Barnsley Football Club, his grandad knew the chairman of the club. Louis spent his placement indulging in his love for Football and spent his time helping out with coaching the team, igniting a passion in him that he still holds today for Football coaching.

” ‘I have a mission on my hands — it’s a pretty stupid one. I have always f***ing wanted to do it. One day, I am going to be a f***ing Sunday league football manager.’ ‘I have always been a football fan. When I was younger, if I had managed to get myself to university, I wanted to do something in sports coaching or something like that. So I think to myself, whenever I am done with all the music stuff or it starts winding down, “I am going to be a boss”.’

At Bootcamp, all contestants had to pick from a list of roughly 40 songs to sing. Self-proclaimed huge Oasis fan, Louis surprisingly chose not to sing one of the Oasis tracks on the list, he opted instead to sing Adele’s cover of the Bob Dylan track Make You Feel My Love, along with Zayn who also chose the track. Liam and Harry both chose to sing Stop Crying Your Heart Out, while Niall chose to sing Champagne Supernova. Sadly only Liam’s performance aired.

But Louis did cover Wonderwall with his high school band The Rogues which he was in when he 14-15 years old.

While appearing on X Factor Louis was paid £55 a week, he used to spend most of it home to Mum to help her look after his younger siblings. Showing how kind he was and how much he loves his family.

He can play the Piano

Not only does Louis write and sing some fantastic songs, but he can also play the piano, and has been learning the guitar as well. Louis often downplays his ability when it comes to playing the piano but from the glimpses, we’ve seen over the years, most recently in the video for his single Two Of Us. We think he’s being just being a bit too modest for this own good.

Let us know your favourite facts at @CelebMix!