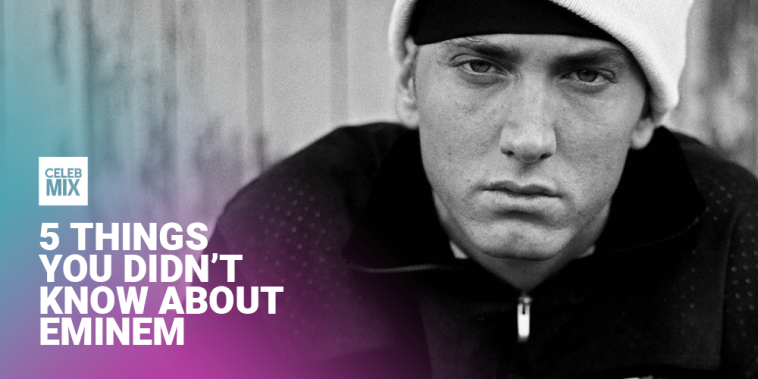 For this article, we have decided to share with you five facts that you may not have known about Eminem.

1. He originally wanted to be a comic book artist

Eminem’s career could have turned out completely differently if it wasn’t for his love of music! Growing up as a child, he read comic books and dreamed of becoming a comic book artist.

However, when he was 11 years old, he discovered hip hop – Ice T’s “Reckless” (1984) was the first hip hop record he heard, after he was gifted it by his late uncle Ronnie. From them on, he became very interested in rap music, and decided he wanted to pursue a career as a rapper.

2. He has his own radio station

Eminem set up his very own radio station, Shade 45, in 2004. The station is on Sirus XM Radio channel 45 in the United States, broadcasting uncensored hip hop music.

As well as playing Eminem’s own material, other rappers such as 50 Cent, Kanye West and Kendrick Lamar have also had their tracks played on air.

Eminem has also notably appeared on Shade 45 several times over the years for interviews. Recently, he gave an interview alongside his manager, Paul Rosenberg, to discuss what he had been up to while in quarantine.

3. He produces for other rappers

Eminem is a very successful recording artist, but some may not know that he’s also a record producer! As well as producing his own material (he was the executive producer on his fourth studio album, “The Eminem Show” (2002), he has also helped to produce tracks for other rappers.

Some of the rappers he has worked with used to be signed to his own record label, Shady Records. These include Obie Trice, Cashis and the hip hop supergroup Slaughterhouse.

As well as rappers, Eminem helped to produce R&B singer Akon’s big hit “Smack That” (2006), which he also provided an epic rap verse for!

Although Eminem is primarily known as a rapper, he’s also done his fair share of acting, having starred in the 2002 motion picture “8 Mile”. In fact, he was originally cast as the lead role in the sports film “Southpaw” (2015), which is about a struggling boxer.

The film’s screenwriter, Kurt Sutter, said he was inspired by Eminem’s own real-life struggles when casting for the film, and was able to convince to jump on board. However, in 2012, Eminem dropped out of the role to focus on his music career.

Ultimately, Jake Gyllenhaal was cast as the main character, although Eminem was still involved as the executive producer of the film’s soundtrack, and provided two songs on the record: “Phenomenal” and “Kings Never Die” (featuring Gwen Stefani).

5. He has his own organisation

Eminem previously founded his own organisation The Marshall Mathers Foundation. The organisation provides help for disadvantaged youth in Detroit and surrounding areas. It also works alongside a charity founded by Detroit attorney Norman Yatooma.

What is your favourite fact about Eminem? Let us know over on Twitter @CelebMix!