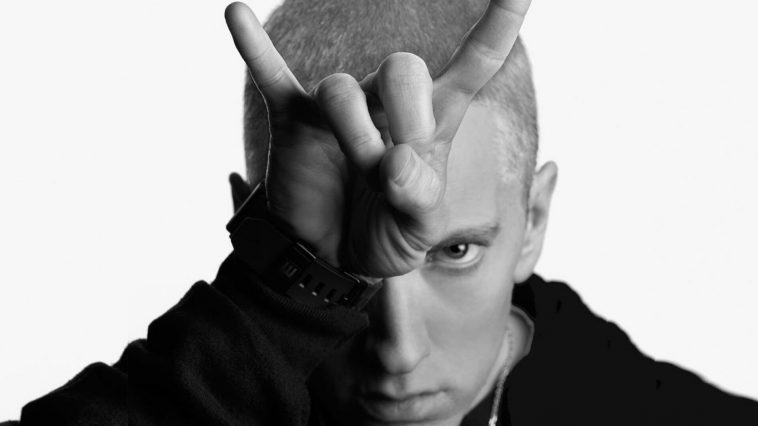 For this article, we have decided to share with you five Eminem moments that have made us laugh!

Ken Kaniff is a fictional character, created by Detroit rapper Aristotle, that Eminem has portrayed several times over the years for skits that have featured on his studio albums. The character first made an appearance during on a skit on “The Slim Shady LP” (1999), and recently appeared at the end of the track “Wicked Ways” on “The Marshall Mathers LP 2” (2013), after a prolonged period of absence.

The skits have always added a bit of light relief to the more serious nature of some of the tracks on Eminem’s albums, and we can’t help but find ourselves laughing at the comical aspects of them. Our favourite has to be his return at the end of “The Marshall Mathers LP 2”, where he parodies the chorus of one of the album’s tracks, “Berzerk”.

In 2004, Eminem’s rap group D12 released their hit single “My Band” – and there’s one pretty funny line towards the end that have kept fans begging for more.

It’s become a bit of a meme over the years, with many fans wondering when Eminem will ever put out this song as an official release. One YouTube user has even made a pretty funny remix of the “My Salsa” part of “My Band” – and we absolutely love it!

One our favourite moments of Eminem and Jimmy Kimmel together was for a sketch in 2009, when Eminem helped Jimmy to become an aspiring rapper. Jimmy decided to adopt the stage name Briefcase Joe, being inspired by the fact he used to carry a briefcase with him to school.

The song he comes up with is a pretty comical and fun attempt at being a successful rapper – and it’s all thanks to Eminem. There’s some pretty nifty lines, such as “my testicles are like vegetables”!

However, as the two hear Briefcase Joe’s song playing on the radio in the car, the radio host announces Eminem is “done” for being involved in the track. So Eminem of course kicks Jimmy out of the car!

Storming out of an award show is serious business – but this time, it was all a set up and we have to laugh back at it. Even Eminem himself said he found the whole situation to be hilarious.

Eminem had attended the 2009 MTV Movie Awards, and even performed that night. He was in the audience following his performance, when Sacha Baron Cohen flew up into the air, dressed as an eagle, and ended up landing on his face! Eminem appeared to look disgusted and got out of his seat and left the show.

However, he later revealed in an interview that the whole thing was staged, and he could not stop laughing when he reviewed the footage back! We found the whole affair pretty funny too.

Okay, this isn’t an official interview – rather a parody, but it’s still up there as one of the Eminem moments that makes us laugh the most. Weird Al Yankovic, best known his parodies of popular songs, used to host his own show on MTV called “Al TV”, in which he would conduct fake interviews with musicians, by using footage from real interviews they gave.

During Al’s “interview” with Eminem for his show, Al seems to be disappointed at him for not allowing him to make a music video for his parody of “Lose Yourself”. He then proceeds to play the track, while Eminem seems to look very annoyed… and then ends up “turning” the track off.

One of our favourite parts is right at the beginning, when Eminem is seen repeatedly saying the phrase “you know what I’m saying?” over and over again, to the point where Al gets very agitated at him! It might not be a real interview, but it’s hysterical.

Which Eminem moment has made you laugh the most? Let us know over on Twitter @CelebMix!