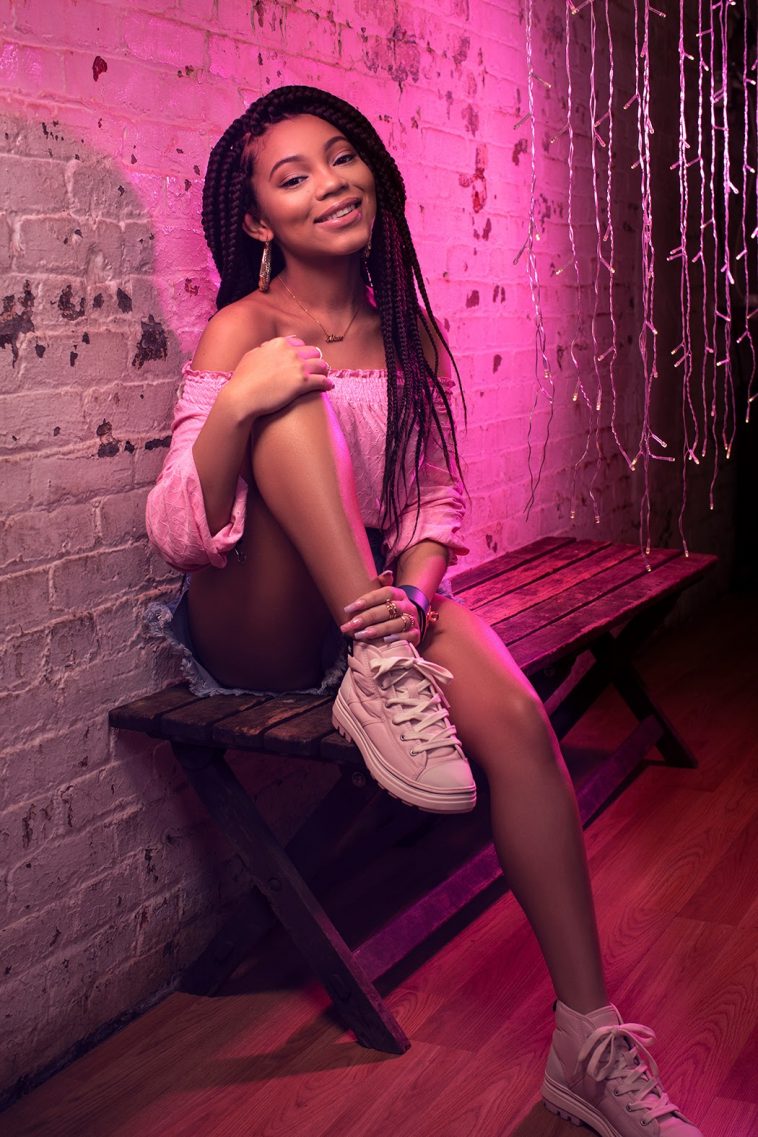 Ahzie is a solid example of why we never stop searching for new music.

The artist has been steadily drawing in crowds on Instagram- with 40,000 followers to date- by putting her spin on the hits that established her idols- Rihanna, Tink, and Teyana Taylor- with her rich, enchanting pipes.

Ahzie has now released her debut single ‘Closure’; a mature, reflective number sung to the tone of angels. Needless to say, when the opportunity to interview Ahzie came along, we responded with a resounding YES, followed by an onslaught of emojis.

Join us for the artist’s first-ever interview, and become acquainted with an R&B icon of tomorrow.

Take us back to the first time you were drawn in by music.

Since I was a little girl, around two, my great grandmother used to take me to church. She sang in the choir, and after seeing her up there, I was immediately drawn to music. I then started singing at the age of three.

Have your family always been supportive of your decision to pursue music as a career?

My family have always been supportive of my decision, and they have always made sure that the choice was my own and that it was something that I wanted to do. Even if I wanted to stop singing, they would support me in that decision as well.

And who was the first person to tell you that you could sing?

My great grandmother was definitely the first person in my life to tell me that I had a good voice and that I should start singing.

You started off covering songs by artists such as Rihanna, Tink and Teyana Taylor on Instagram, and the reception was very positive. Was it always the plan to start releasing original songs? Or were you inspired to give it a shot based on the feedback you were getting?

I’ve always wanted to write and sing my own songs since I was a young girl. I have been writing songs for a while now about heartbreak and break-ups, but it was definitely the feedback that I received from doing those covers that really pushed me to start releasing my own material.

Why did you choose Instagram to make your mark?

I chose Instagram as a platform because, at the time, I felt it was the best way to get myself out there and show people my real talent. I didn’t have access to a studio or anything, and so Instagram just felt like the best way to go about things.

Your new single ‘Closure’ is a very cathartic and emotional song about heartbreak- something that almost all of us can relate to. Those feelings must have been playing on your mind a lot?

Yeah, I’ve been through it a lot. I was working in the studio with my producer Brian Stanley, who came up with the concept, and I thought it was super relatable because we all need closure to move on from the things in our past. He just put the beat on and then everything started flowing from there.

And what is it about the visual for the track that brings the emotion in the lyrics to life?

I’ve already been through it, and I know how everything goes. The video just felt like the perfect way to capture those emotions that I’ve felt in the past. At least that’s what I think.

The visual ends with the statement “Real Music Forever”. Why was this chosen to end the video?

Is it important for you to write music that can help people through the tough times in their lives?

Yeah, it’s very important to me that I write that sort of music because I know that for myself, music has helped me through a lot, and so I want my music to have that same impact on my fans. I want them to feel like they can stick on one of my songs and find lyrics that relate to something going on in their life.

You are arriving on the scene during incredibly difficult times. The global impact of COVID-19, and the unrest among the Black community in the US. As a young Black girl, how has this affected you as a person, and as an artist?

The situation with the Black Lives Matter movement has really moved me. It has shone a light on what Black people go through every day, especially with the police brutality. I mean, every time I see something posted on social media, I think to myself, ‘that could just have easily been one of my family members.’ In terms of the coronavirus, it has stopped me from doing a lot of the plans that I had in the works as an artist, but it has never stopped me from making music, and it never will because this is what I love to do.

So what can we expect to see from you next?

I’ve been working on my debut EP ‘What Lies Ahead’. The title has a double meaning because it’s talking about the lies that a guy I was dating was telling me, and then it also touches on what may lie ahead in my future. I am super excited to share this new music with everyone!

What are your thoughts on ‘Closure’? Head on over to our Twitter page @CelebMix and let us know!