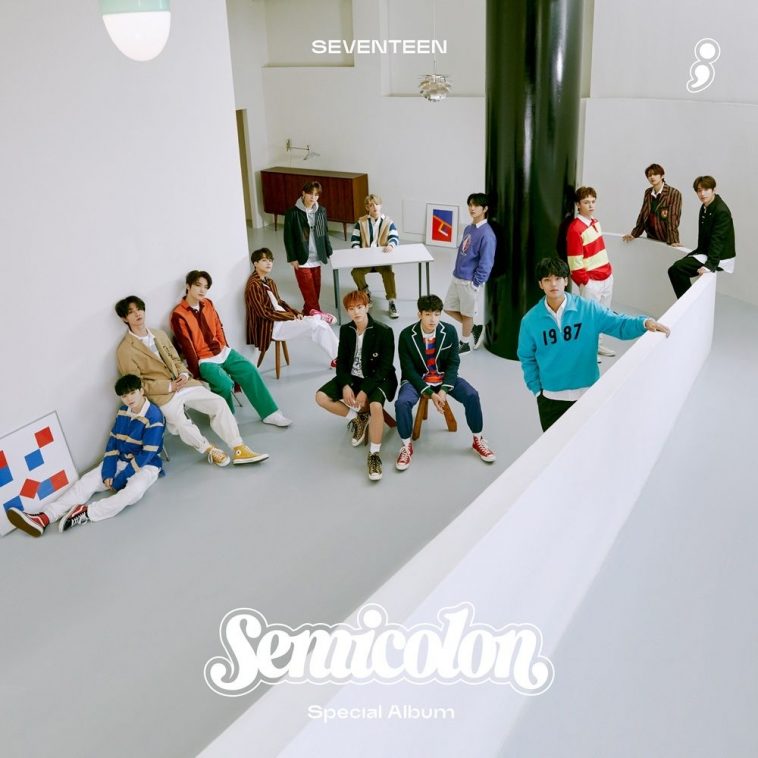 With 2 billion streams and 4 million albums sold, Seventeen is a globally-popular group comprising of 13 members. If the direct involvement of the artist in the creation of their artwork gives a glimpse into their psyche and beliefs, Seventeen’s discography holds a wealth of knowledge about the group’s creative vision, evolution, and their personal growth. Known for their active involvement in writing, composition, production, and choreography, the stellar performances that we see on stage is a consequence of the hard work these 13 members have been putting in since day one.

Just within four months since the release of Heng:garae, the group is back with a special album. Titled “Semicolon”, the new album carries a message of consolation for youth. It was released today on all the streaming platforms along with the music video for the title song Home;Run.

When we talk about youth, we often attribute vivacity, optimism, and world-transforming ability to it but we often forget the weariness these expectations bring. Also, we often limit our understanding of ‘youth’ by restricting it to our linear conception of age. But in their new record, Seventeen talks about an all-encompassing experience of youth including exhaustion and the need for a pause. They beautifully express it through the symbol “;”:

“In a sentence, a semicolon allows a momentary break to enable seamless continuity and unhindered explanation, the musicians agree. Youth also calls for a temporary break, which paves the way for longevity. The semicolon is not a symbol of the end. Rather, it represents the eternity of our journey in life. It gives the young generation a moment of laughter through the melody and instills hope to appreciate the true joy of living in the moment.”

Today, Seventeen sat with the members of the press in a Global Press Conference to unveil the music video for their title track “Home;Run”, discuss the messages they aim to convey through their new album, and what can their fans expect from the upcoming performances.

Reflecting on the success they have achieved globally, the group credited their fans also known as Carats as the equal stakeholder in their journey. While talking about the new album and the genre of retro that forms the foundation of it, Seventeen shared that Semicolon is their own interpretation of the genre. They wish the album to become a part of youth’s memory and also a memory for the group as well, who wish to make it memorabilia that carry their own strong scent of youth. The aim is to allow fans to use this record as a moment of break, just like the album’s title, to catch a breath and live the present. This break need not be grandiose as they emphasize but something that provides one with peace of mind.  Vernon puts it best, it’s important to “soundly prepare for the youth” so that we can enjoy our significant moments.

The members also talked about their musical evolution and shared that as they have gotten closer, the experiences have deepened, the reflection of which is evident in their music too. As artists, these experiences have allowed them to build a rich discography and it has also become their strength as they have been able to bring forth the unique charm of all the members through unit set-up or the group-specific showcase. Enthusiastic about the release of the album, the group asked fans to look forward to their upcoming performances.

The album “Semicolon” comprises six tracks including Home;Run, Do Re Mi, Hey Buddy, Light a Flame, Ah! Love, and All My Love. This time, as shared in the press conference, the group has experimented with a new sub-unit. In terms of their participation, Woozi and Bumzu have contributed to the lyrics for all the tracks while there is the heavy involvement of members in writing, composition, and arrangement of individual songs. For our review, we have used the translation of the lyrics shared by @cheolwangja on Twitter.

The title track uses a combination of analogies, specifically baseball to depict the idea of chase. With one’s dreams symbolized through a diamond, the group shares that while we might never reach the end of our journey, it doesn’t mean that we cannot enjoy our moments. Each moment that we spend in our life is a home run and we can always pause to appreciate what we have achieved so far. No victory is small.  In this competition-led world, the diamond will be sold at an expensive rate and the youth will be placed as collateral but we can always defy the norms, break the glass and snatch our dreams away.

With its larger than life visuals and cinematic appeal, the music video celebrates life. From brilliant choreography, great outfits, and acting skills, the video holds one attention from start to finish, leaving the viewer engrossed and in anticipation to know what will happen next.

Performed by Seungkwan, Vernon, and Dino, Do Re Mi has to be one of our favorite tracks from the album. The song talks about the dilemma we all face in the choices we make in life. Acknowledging that these choices follow a series of regrets and deliberations, the trio shares that what seems like a passing moment to us is instead a path we have carved for ourselves. Instead of being deluded by ‘what ifs’, we can anytime create new notes and it’s not always necessary to begin with do re mi. One can begin with mi re do too.

Bursting with energy, Do Re Mi carries a hopeful vibe and is a sonic embodiment of hope. In these trying times, the song is definitely able to cheer the listeners and bring a smile to their face.

Like they mentioned in the press conference, Semicolon is Seventeen’s interpretation of the genre, and Light a Flame is a brilliant example of it. The track mimics intimacy and the peculiar sound of the genre by recreating the moment using the slow pace of music and recording the count of every action in the lyrics. There is a complex intertwinement of elements specifically emphasized through the use of words like Despacito and metronome, which not only symbolize the pace of music or the flickering movement of a candle’s flame but also a specific stage in one’s desire. Light a Flame, as a track, definitely stands out. What seems like a generic storyline is instead a brilliant display of Seventeen’s craft.

Light a Flame talked about desire in implicit terms but Ah! Love is an explicit confession of love. Instead of seeing the track as one’s feeling for specific someone, it should instead be seen as a track of acceptance of an individual who is now ready to love others. It marks a new beginning in life and the transition from I love you to I love me is significant as it shows one’s personal growth. Poetic in writing and laid back in sound, the song talks about one’s yearning for love in the future, whatever the timeline for that future maybe.

For a group that doesn’t leave any opportunity to pay gratitude to their fans and showcase their love, providing comfort through music is quite natural. All My Love is a fan-anthem that shares the group’s frustration of not being present for their fandom. Sharing that they have always been at the receiving end of their fans’ love, the group presents the song as a source of motivation that Carats can use to move towards the hopeful tomorrow.

Lyrically and sonically, the album stands true to the group’s objective for their new record. The hopefulness of the lyrics provides a sense of comfort and a momentary break, enabling the listener to take a step back, pay attention to the present moment, and appreciate it. For the times that we are living in, Semicolon is a much-needed stop.

Semicolon recorded 1.1 million stock pre-orders, following Heng:garae that surpassed 1.06 million pre-orders prior to its release in summer. Depending on the first week’s sales, there is a possibility for the group to become double million sellers.