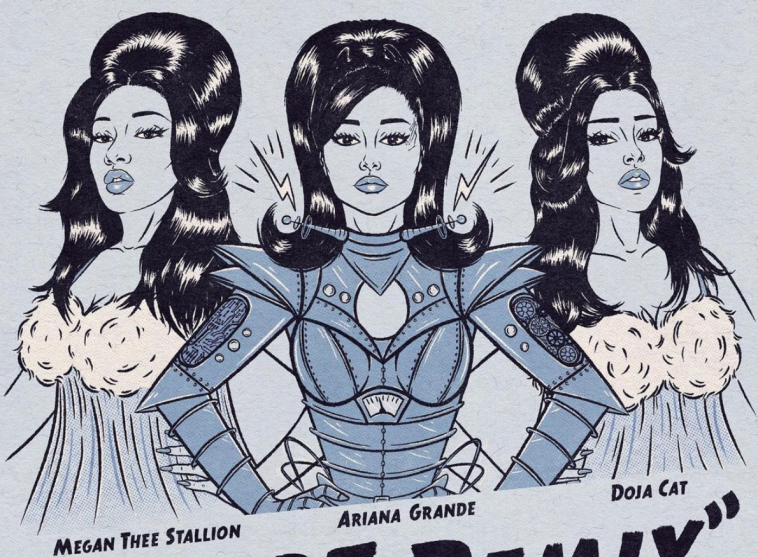 Ariana Grande has officially released the remix of “34+35,” a fan-favorite off of her latest album Positions, and listeners are already obsessed with this new version.

Grande originally began teasing the remix of this track earlier this week on social media. In a short video-clip posted online, viewers could see the “positions” singer’s silhouette on a vintage-TV alongside two mystery women. Of course, fans immediately began to speculate what this video was teasing and who it involved.

Hours before officially releasing the remix, Grande unveiled who the collaborators would be, Megan Thee Stallion and Doja Cat, and what the teaser was all about. A lyric-video for the “34+35” remix was also released simultaneously, featuring visuals that match the track’s artwork.

The original music video for this track was directed by the iconic Director X and shared with fans back in November of last year.

Doja Cat originally teased her involvement in a possible “34+35” remix in November of 2020 when she clearly teased her verse on social media.

“Add up the numbers or get behind that/Play and rewind that, listen, you’ll find that/I want that 69 without Tekashi/And I want your body and I make it obvious/Wake up the neighbors, we got an audience,” Doja Cat raps on the track.

Fans of Ariana Grande have been receiving plenty of content recently. Last year, the singer released a Netflix concert documentary titled “excuse me, i love you,” as well as a live album consisting of performances from her Sweetener Tour: k bye for now (swt live).

Social media is now buzzing with what may be coming next. Some fans are expecting more remixes and visuals for her album Positions, which was released in October of last year. Others, however, think that brand new music will be arriving sooner than we think.