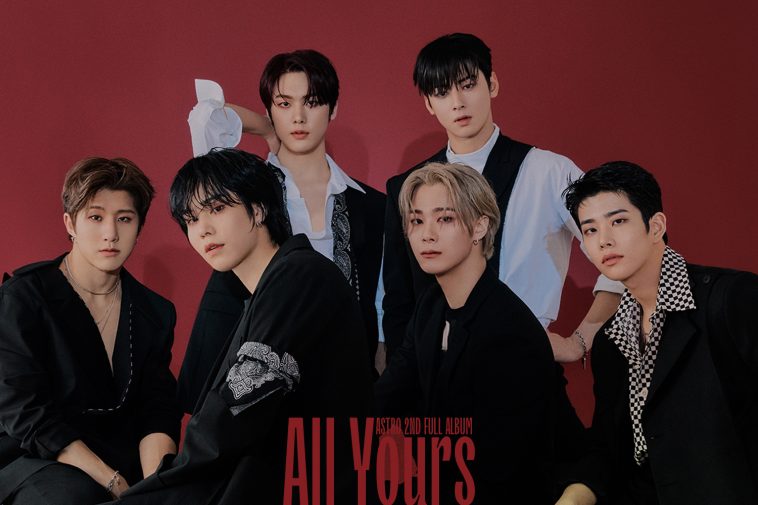 On 5th April, Astro made their comeback with their new album ‘All Yours’. We think it sounds amazing. The album is a different sound. We absolutely love this era so far.

Title track ‘ONE’ sounds absolutely amazing. Paired with a music video that provides a comeback that is powerful.

Other songs accross the album take you on a journey. This is Astro’s second full album. After their first full album ‘All Light’ In between, there were a range of mini albums they released. We certainly believe that a full album was definatel worth the wait. Astro is back, but with a more mature sound. They have perfectly executed their originality and this new sound to their music.

Even from all of the teasers we were super excited and geared up for this comeback. We were definitely not disappointed when we first heard the album. We will probably have this new album on repeat.

‘Dear my Universe’ is the first track on the album. It has a good beat and some good vibes. This song is definately upbeat but sounds very chilled at the same time.

‘Butterfly Effect’ is the second track on the album. Another upbeat sounding song. It has a good interchange from the first verse, to the pre-chorus, before the beat drops into a catchy chorus section.

ONE is the third track on the album. It is also the title track to the album. We think it has an amazing beat to it. In addition to this, we love the way the song starts with the title of the track being spoken to the beat at the beginning, and then precedes into the verse. We also absolutely adore the drum section as the pre-chorus transitions into the chorus.

The fourth track on the album is ‘Someone Else’. By this point we were obviousy singing along. ‘Someone Else’ has is certainly a catchy tune. We especially love the rap sections of the song in addition to Sanha’s vocals accross this song.

The fifth track is SNS. It is a more slower and laid back song. We absolutely love Cha Eun Woo’s vocals in this song.

The sixth track is ‘All Good’. That is the name of the track, but it definately lives up to it’s name. This song sounds positive and emits so much positivity.

The seventh track is ‘All Stars’. We absolutely loved this song especially the chanting like part of “Everything is Okay”. We also loved the groups harmonizing in this song.

The eight track is ‘Our Spring’, a more slow tempo song. We love the build up to the chorus.

The ninth track is called ‘Stardust’, another more slow tempo song. The tenth track and final track on the album is called Gemini. This is once again an amazing song. But a calm and slow tempo track to finish the album.

Overall, this album is defintely a breath of fresh air during the still wierd and strange times happening in the world. It is a positive sounding album overall. It is definately a more mature sound from Astro. We can not wait to see what is next for Astro.