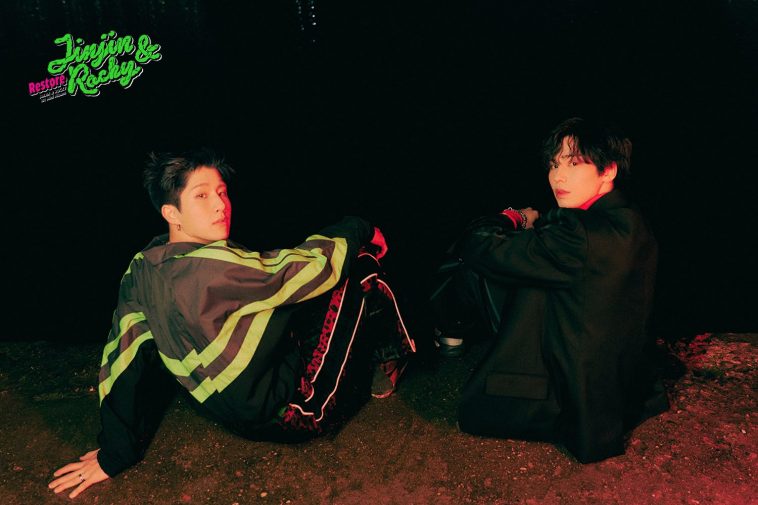 On the17th January Astro’s latest sub unit, JinJin and Rocky will release their mini-album titled ‘Restore’. The physical copies will have two versions which are ‘Vacation’ and ‘Staycation’. The album definitely has an exciting concept, in which we can not wait to play this album on repeat. Astro definitely have members with great talent.

The mini-album is part of Project Astro, in which we can expect to hear more as Astro’s journey in the KPOP world continues. We absolutely adored the Moonbin and Sanha sub-unit mini-album In-Out, when it was released in 2020. So we are buzzing to hear what this next sub-unit has in store for Aroha’s.

Delving into the colour theme for the album. We love the cover design and colour palette for the mini-album. The colour palette is very bold and features green, purple and blue. With the title in a pink with a red tone to it.

From the titles of the tracks on the track list, the album sounds like it is going to be really good. We get vibes of the situation we have gone through for the past few years worldwide. In which, Astro are always a positive vibes group, so the concept will most likely be explored in a positive way.

We are super excited to hear the collab with Weki Meki on the album. Weki Meki are a girl group from the same company as Astro, Fantagio. After listening to the highlight reel, we think from the snippets of each track, the album is definitely going to be amazing.

‘Complete Me’ has a very upbeat tempo in which we can certainly imagine some good dance choreography to this song. ‘Lazy’ is the song that ‘Weki Meki’ will be featuring on. We can not wait to hear the rest of the song as from the small preview in the highlight medley it is definitely a catchy song. We are looking forwards to hearing ‘Weki Meki’s’ vocals on the track.

‘CPR’ is more slow tempo than Complete Me and Lazy. It sounds like the kind of song straight from a KDrama. Which we think certainly adds a great dynamic to the mini-album. While ‘Lock down’ is an upbeat song with some very effective vocal layering which adds to the feel good sound of the album.

The title track is called ‘Just Breath’. We are definately looking forwards to seeing the music video for this track. This track also has some effective vocal layering that definately adds to the style of the track.

Overall, we are liking the sound of the new album from the highlight reel, We can not wait to hear this first mini-album from Astro’s rapline.