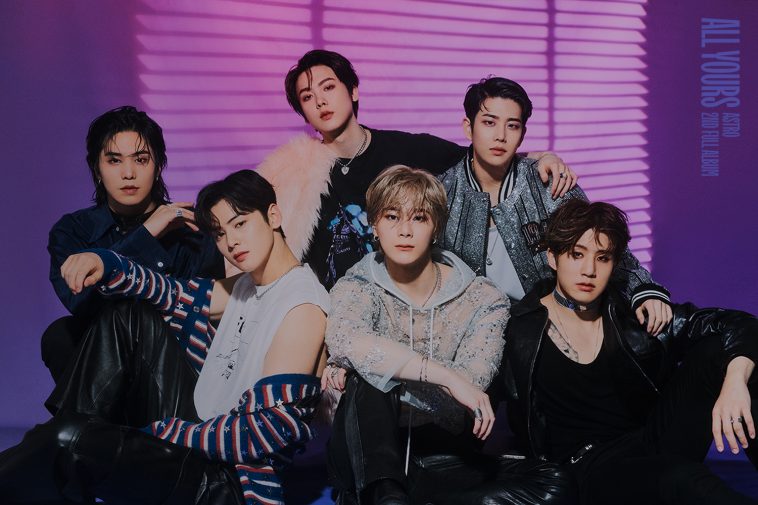 KPOP group Astro, are set to release their new album on 5th April 2021. This will be their second full album after some amazing mini-albums.

On 11th March Fantagio announced that Astro would be releasing a new album called ‘All Yours’. From this announcement we were already excited and intrigued as were so many fans.

Then on 12th March fans were left with another teaser of the new album. Which teased the potential for three different versions. The teaser featured ‘All Yours’ written in three different colours. This was red, blue and purple, along with the release date.

On 16th March, Fantagio (Astro’s management and label) announced what the comeback schedule for Astro’s new album would look like, releasing the schedule for things like concept photo and video releases.

The 20th March saw the release of the third concept photo for the album. This time featuring a purple colour pallet and purple text.

From the hashtags on each concept photo release it is clear to see that there will definately be three different versions, ‘You’, ‘Me and ‘Us’.

Finally we are brought to today, the 21st March, where Fantagio released the tracklist for the new album.

After looking at the tracklist we believe that just from seeing the titles alone that Astro’s new album is going to be amazing. The title track is going to be called ‘ONE’ from what we can see.

In addition to this, Cha Eun Woo has dyed his hair ash grey. Which is most likely for the new comeback, as it pretty much coincides.

We are super excited to hear what Astro has to offer in their new comeback in April. We can not wait to hear the new album which will most likely be added to our playlist and be on repeat constantly.