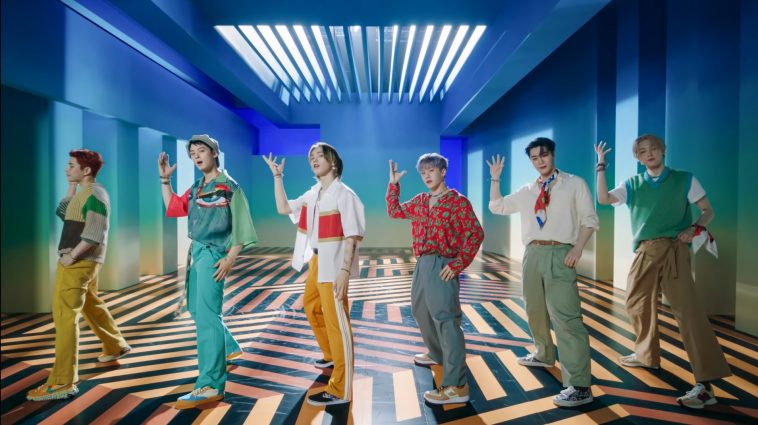 KPOP heartthrobs Astro released their 8th mini-album ‘Switch On’, 2nd August 2021. The album consists of six tracks all together. We are absolutely loving it so far it definately has plenty of summer vibes.

‘After Midnight’ is the first track on the mini-album. This track has really had us attempting to sing along, so will definately be one where we shall master the lyrics really quickly. It has a feel good beat, which is the perfect track to not only be the first track on the album, but also the title track. The song has a really strong hook which really makes the song.

The second track on the mini-album is called ‘Footprint’. This song like the last also provides feel good vibes. We absolutely love the beat of this song, it is definately a bit of a KPOP dance anthem. If this track was played at a party, everyone would definately be on the dance floor.

Adding to the summer vibes, we have a laid back but still sort of feel good third track on the mini-album. This track is called ‘Waterfall’. This sounds like the kind of track that would have everyone in a concert arena waving their arms from side to side and singing in unison. All we can say is we absolutely love this song. We are at a loss for words at this point. We believe this is definately one of Astro’s best comebacks.

The fourth track on the album is called ‘Sunset Sky’. The title of the track gives of summer vibes, as in the summer there are sunsets that are beautiful, and by the beach there are also beautiful sunsets. In which a trip to the beach always completes a good summer. This is also another laid back song. The vocals are absolutely amazing and the rap sections are a easy on the ears. Which is important in a song that is laid back.

The fifth track on the album is once again an upbeat and uplifting dance style track. The song is called ‘My Zone’. We absolutely love the hip hop but feel good pop style beat to this track. The hook in ‘MY ZONE’ definately has us hooked on this song.

The sixth and final track on the album is called ‘Don’t Worry’. This is a feel good track once again to finish off the mini-album. The track starts off sounding laid back, and then ascends into a uplifting and more upbeat sound. Which we absolutley love.

we absolutely love this new mini-album from Astro. They never fail to amaze us. They have certainly taken us on a journey once again with this mini-album. We love all of the tracks and they provide a sense of upliftment.

Let us know what you think on social media @CelebMix