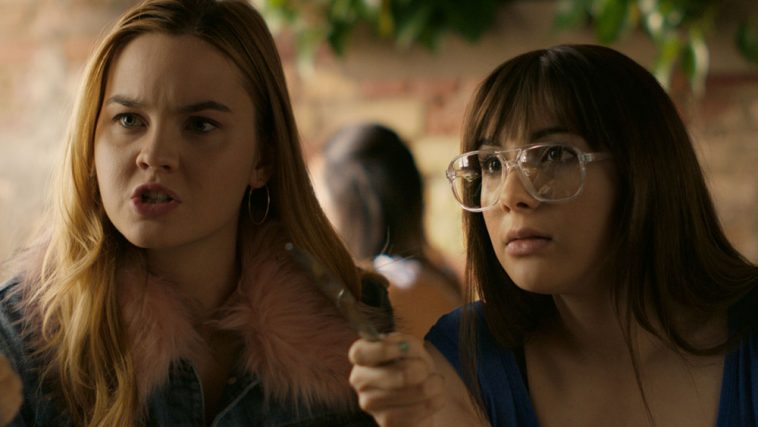 When you think Romcom you think happy ending with true love, well this movie does have that but it’s more about friendship than a relationship.

The new movie Banana Split, hits the ground running with a montage that recaps a two year high-school relationship. Most of the movie doesn’t move that fast but it never loses its snap. The plot centers on April (Hannah Marks), who is still healing from the breakup with Nick (Dylan Sprouse), discovers that he has a new girlfriend, Clara (Liana Liberato), who just moved to Los Angeles.

April and Clara end up meeting at a booze-soaked party, where April learns that Clara isn’t the heartless pretty girl who steals the ex right away she thought she’d be. In fact, she is a ton of fun and they end up being the best of friends.

April is now between her senior year at high school and first year at college. She learns a lot very quickly in this short time, that sometimes people you fear meeting can turn out to be very cool. Also, not getting into drama is a very big plus, if you an avoid it at all cost, but for April that’s not the case, she’s getting into drama between Nick and Clara frequently towards the end.

Banana Split, will be available Friday on demand and on streaming services, due to the theaters having to close, is the feature directing debut of the indie-film cinematographer Benjamin Kasulke, who makes the film enjoyable to watch while cozied up in bed with a bag of chips. The film is a quick one hour and twenty eight minute watch, but that makes it even more enjoyable, fun, short and sweet. Our attention spans are so short as it is, the movie is a perfect watch in times like these, it gets you distracted and in a good mood.