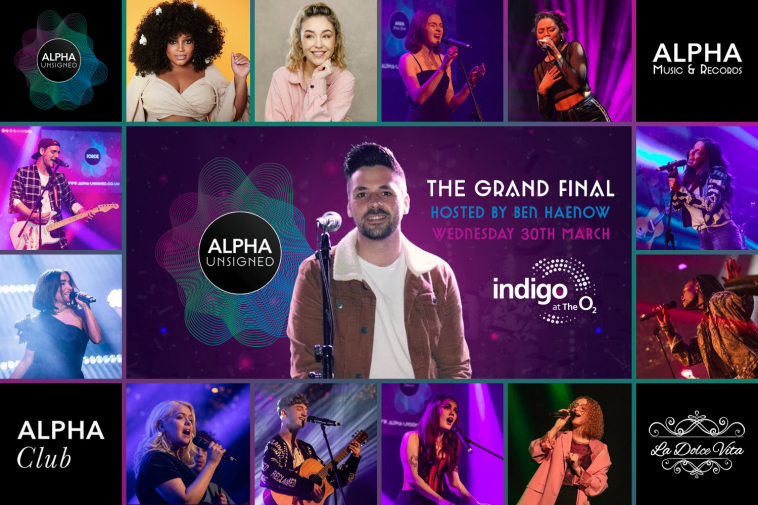 Tonight is the night! After three extraordinary heats, the grand final of Alpha Unsigned will see ten talented finalists perform and compete for a £100,000 record deal with Alpha Music & Records.

The life-changing event, which is being held at indigo at The O2 in London, will be hosted by X Factor champion and platinum selling artist Ben Haenow. As the winner of a singing competition himself, Ben mentored and gave valuable advice to all of the contestants at the qualifying heats.

Speaking ahead of tonight’s final, CelebMix favourite Ben Haenow said: “Competitions like this one are such a huge opportunity for upcoming artists. Having a record deal is what any musician dreams of which is why something like Alpha Unsigned is such a great idea. This sort of competition helps to nurture undiscovered talent and could unearth the next big thing in the music industry! As someone who came through a similar style of competition myself, I know first-hand how it can massively help to springboard a career in music and open so many doors.

“Having worked closely with Alpha Club for years and now with the launch of Alpha Music & Records, it’s refreshing to see people with such a passion for music offering a life-changing prize with Alpha Unsigned. They have a real knack for finding, nurturing and supporting new and upcoming talent. With a wealth of knowledge and contacts, they could really give the next rising star the big push that they need to break through in what is a very tough industry. I’m very excited to be hosting this year’s final and it’s going to be an incredible night of music!“

The ten finalists taking to the stage tonight will be: Mim Grey, Ania Prasek, Lois Morgan Gay, Joe Taylor, Gola, LaMont, Macie Nyah, Minerva Daisy, Forde and Rya. The winner will be decided by a judging panel of music industry professionals and the live audience who will be able to vote.

West End superstar Marisha Wallace and Sorsha Seven, who recently released her stunning debut single ‘So Completely‘ via Alpha Music & Records, will also be treating attendees to performances so it’s set to be an incredible night of live music. Tickets for tonight’s grand final are available here.

Who would you like to be crowned the winner of Alpha Unsigned? Will you be attending the grand final tonight? Let us know over on Twitter @CelebMix!