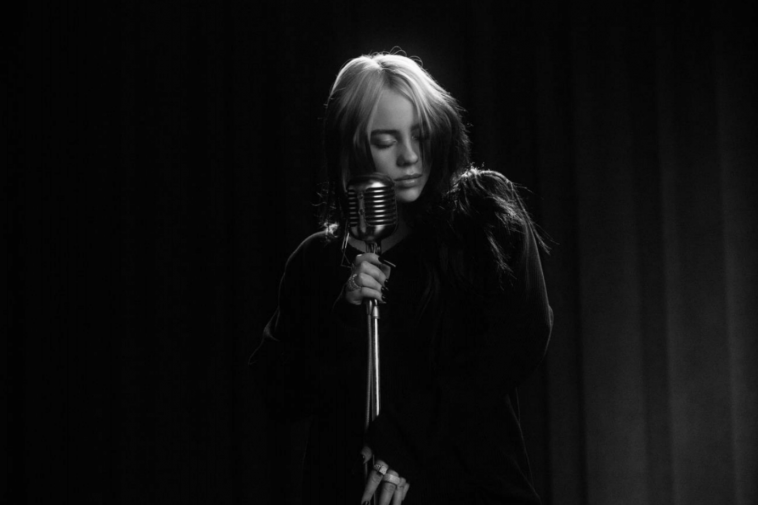 Track serves as the official theme song from the forthcoming James Bond movie.

Directed by the legendary Daniel Kleinman, the visual interweaves footage of Billie with scenes taken from the highly anticipated Bond film, which is due to premiere in London next month.

Watch the official music video for No Time To Die below:

“Fool me once, fool me twice… are you death or paradise?”

Produced by FINNEAS, alongside Stephen Lipson (Annie Lennox, Will Young, Natalie Imbruglia, S Club 7) with orchestral arrangements by Hans Zimmer and Matt Dunkley, and guitar from The Smiths’ co-founder Johnny Marr, the brooding and dramatic track sees Billie Eilish become the youngest ever artist to write and record a Bond theme song.

“It feels crazy to be a part of this in every way.” Billie says of being chosen to record the track. “To be able to score the theme song to a film that is part of such a legendary series is a huge honour.”

“Writing the theme song for a Bond film is something we’ve been dreaming about doing our entire lives.” Eililsh’s brother FINNEAS adds. “There is no more iconic pairing of music and cinema than the likes of Goldfinger and Live and Let Die. We feel so so lucky to play a small role in such a legendary franchise, long live 007.”

Speaking on Eilish and FINNEAS’ involvement in the film’s soundtrack producers Michael G Wilson and Barbara Broccoli reveal: “Billie and Finneas have written an incredibly powerful and moving song for No Time To Die, which has been impeccably crafted to work within the emotional story of the film.”

No Time To Die is out everywhere now.

Billie Eilish and FINNEAS will also be joining Daniel Craig for James Bond Day with a very special interview and performance on NBC’s The Tonight Show Starring Jimmy Fallon on Monday, October 5th 2020.

Let us know your thoughts on Billie Eilish’s new music video for ‘No Time To Die’ over on Twitter @CelebMix now!