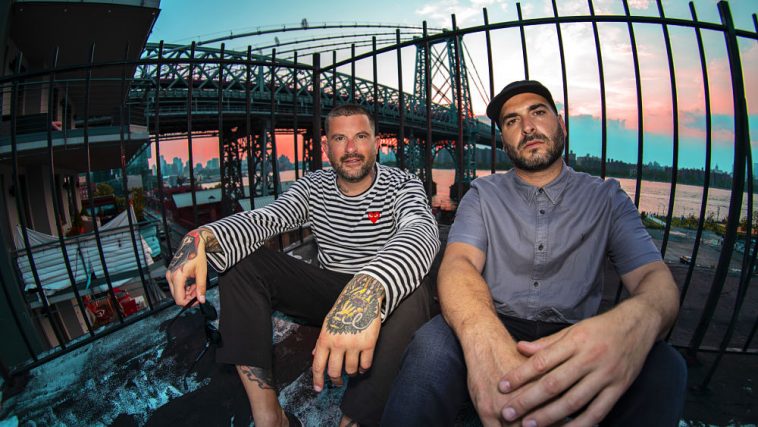 Black Caviar is Troy and his lifelong friend Jared. They have been friends for many years playing in various different bands, but have been making music together as Black Caviar for 6 years now. Unfortunately there isn’t a great story behind the name other than they thought it sounded slick and expensive.

“Feels great, in many ways it feels like birthing a child,” Troy expresses on the release of Black Caviar’s newest record, ‘Rivington & Ludlow‘. “When you first start it’s excitement and ecstasy but then it becomes painful and uncomfortable till the big day and you finally release it to the world and say, good luck.”

Black Caviar recorded all 4 of the songs on the EP in Troy’s apartment in the Lower East Side. When they’d take breaks to get some fresh air or a bite to eat, they would always walk by the corner of Rivington & Ludlow where the Beastie Boys shot the cover to their hip hop masterpiece album, Paul’s Boutique. “We thought it would be fun to give a nod to one of our favorite artists of all time with the title and artwork,” Troy continues. “The songs have more of a hip-hop vibe and worked well together.”

“I think so… we really didn’t start out with a major concept of what to do with this EP,” Troy expresses to CelebMix on the release. “It was more of wanting to finish up these songs and put them out.”

EP’s are fun and challenging because it’s putting songs together with a similar theme or vibe.

“A lot of times when writing music we’ll just start an idea and go as far as we can with it in a session or 2,” Troy continues. “After a while you have a stockpile of these song ideas, so you pick songs that have a similar vibe and say these will work well together as a package. Then you set a release date and try to make the songs sound as good as you can by that date.”

The songs on the EP really came from the duo’s love of hip hop, dance music, New York City, and being inspired by all different kinds of rhythmic music. “We think the future of releasing music is going to be independently which inspired our song “Own My Own Masters,” it’s a song bragging about keeping all your publishing and royalties,” Troy says.

Coming off the release of the EP are two songs, “Been That Ill” and “Own My Own Masters,” which are two songs Troy highly recommends for specific reasons.

“Been That Ill” is a hip-hop heater that doesn’t let off the gas for a second, and it features Oakland rapper G.L.A.M. It is the 4th song they have worked on with her and it might be Tryo’s favorite. “She once again blew us away with her amazing style and flow,” Troy explains. “She has a line that says “Got a mask on my mouth because I’ve been that ill.” This was written before COVID 19… maybe she had the foresight to see into the future, or maybe she really is that ill… We think both.”

One of the duo’s other favorite songs on the EP is “Own My Own Masters.” The duo would always laugh when rappers bragged about unconventional things like always having fresh socks or sitting next to Vanna White on an airplane. “We thought it would be fun to brag about making hits in your stu while keeping all the royalties and publishing,” Try adds. “For the beat we went with an old school, breakbeat, Fatboy Slim kind of vibe.”

2021 looks to be an important time for the duo out of New York. In fact, they are hoping to release new music every few weeks this year.

“Our next few releases will be more house music based,” Troy tells CelebMix. “We just finished up a house banger with Lee Wilson that we are super excited about.”

Black Caviar have also just finished up a more latin song with Venezuelan singer Reina Leona that’s fire. And they are also hoping to finish up a disco/funk EP by the end of this year! So much coming up for Troy and Jared, it is worth staying tuned.