Here at CelebMix, we spend a lot of time daydreaming about brands we’d love celebs to collab with, so we thought we’d share some we’think Louis Tomlinson should work with.

Yorkshire Tea is a bit of an obvious one where Louis Tomlinson is concerned as he’s a massive fan of the brand, taking their tea with him all over the world when he toured with One Direction.

Nice cup of Yorkshire tea to start off the day. Perfect

The brand is also a massive fan of Louis, even sending him a birthday cake one year. 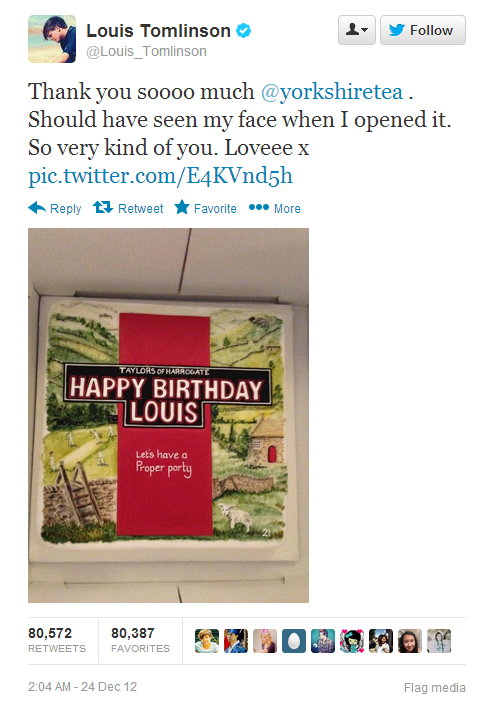 So we think he’s the perfect person for them to use as a voiceover on TV and radio ads.

Louis and Pizza Hut have a long and beautiful history, with Pizza Hut regularly tweeting about how much they love the Kill My Mind singer. They adore him so much that they hooked up with Pizza when he was desperate for it and they didn’t deliver to his house.

@pizzahutuk you don't deliver to my house ? check dm's ?

They even once got into a huge Twitter argument with their rivals Dominos over the singer.

Looking forward to #Cbb tonight with a @pizzahutuk !! Gimme that cookie dough !!

@Dominos_UK bring the mozzarella dippers back and I'll consider it …

We’d love to see Louis team up with Pizza Hut to maybe create his own range of limited edition Pizzas with all proceeds going to charity.

Louis is often seen wearing Adidas. So what could be better than him becoming the face of the brand or even designing his own capsule collection? We aren’t alone in thinking this a petition was set up by a fan a couple of years ago.

He often wears the brand, most famously he wore the brand’s shoes in One Directions History music video.

Doncaster is Louis’s home town and he’s very proud of his roots. He and Doncaster council follow each other on Twitter and they seem just as proud of their homegrown Donny lad as he is to be from there.

So we’d love to see them team up and see him do some sort of promotional campaign promoting the city! Tommo Tours, anyone?

Louis loves a good sausage roll or a steak bake from Greggs.

@GreggsOfficial get ready to serve me up with multiple sausage rolls and steak bakes . Been too long

We’d think it would be great to see them team up to launch some tasty treats.

Let us know at @CelebMix which brands you’d love to see your fave celebs team up with!