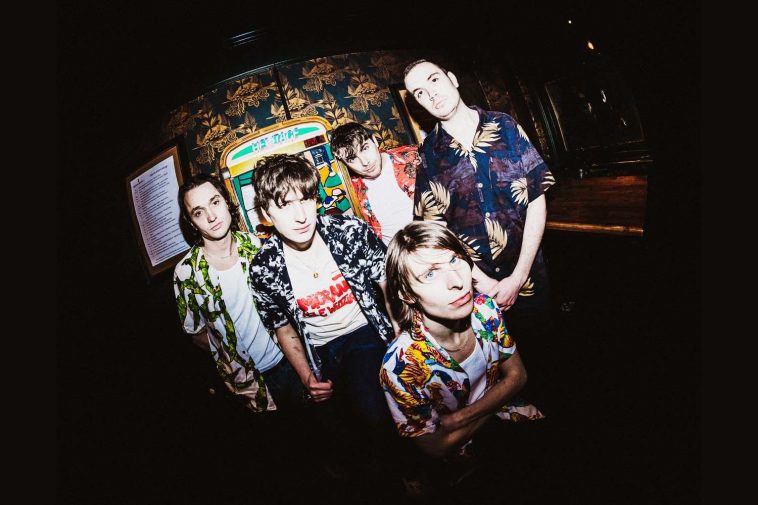 When Manchester’s boisterous, anarcho-indie guerrillas first ambushed the UK music scene back in 2014, with their riotous debut EP Le Chou, they had no long-term plans for the band. “All we wanted to do was record an EP, put it out there to show people our art, and that was good enough for us”, says the band’s co-frontman Lee Broadbent, as he calls for his dog Oscar in a park somewhere in Manchester.

The next few years must have sent Broadbent and Co. into a state of incredulity as they graced the John Peel Stage at Glastonbury, saw their album Nihilistic Glamour Shots’ hit the UK Top 30, and performed a sold-out show at the Manchester Ritz.

The band’s upcoming full-length, Amanita Pantherina, is due for release later this month, and so we hopped on a call with Lee who talked us through everything from the album’s intriguing title and manic artwork, to his recently acquired Corrie addiction.

Amanita pantherina is a species of fungus found in Europe and Western Asia and is also the title of your upcoming album. What is the meaning behind it?

First of all, it’s linguistically perfect. I’ve never heard something that rolls of the tongue better than it, so that was definitely the main stand out. Our guitarist Eoghan is a huge fan of an American mycologist called Paul Stamets who gave us the inspiration. He tells a fantastic story about his first experience taking the Amanita pantherina on The Joe Rogan Experience Podcast. As soon as he said the name of the mushroom, we immediately fell in love with it. It’s basically a toxic mushroom that has psilocybin effects that create this sort of repeating syndrome in the brain. Being the kind of band that we are, we just automatically took that as a metaphor for what we see as the repeated failures of governments upon the world.

The visual for the album’s lead single You’ve Made An Art Form (From Falling To Pieces) was a good indication that there might be a fungus theme. Did you already have the album’s title locked in, or did it stem from the music video?

The video was inspired by the title of the album which we had already decided on. I guess you could call it a sort of Easter egg type thing. Paul Stamets explains how mushrooms are the true power of the universe and that the way in which they grow is unlike anything else ever seen on the planet. When we started researching it after hearing about it on the podcast, it just really took to us and we knew that it had to be the name of the album.

And the title of that track was taken from an old Coronation Street script in 1988. Is being a Corrie fan synonymous with being a member of Cabbage?

Not particularly, although I’m absolutely stuck in the Geoff story at the moment because I want to see him get his comeuppance. I think for Mancunians, there will always be a place for Corrie in our hearts. I think it’s the jovial side to Corrie because I mean at the end of the day it’s a comedy but the way that they present it is absolutely fantastic. I think if everyone spent a bit of time watching Corrie, they would find something that they liked about it and then become hooked, like me.

Sonically, the track opts for more major chord progressions than the minor onslaughts on your previous album. Was that something that you were actively experimenting with?

Cabbage have stopped writing songs in F# minor which seemed to accidentally be our go-to chord. Joe (guitars/vocals) has always been on the poppier side of writing music and so I think it stemmed from a solid idea that he had and then basically mutated into something that I don’t think any of us really expected. When we were writing it we didn’t expect it to be a stand-out Cabbage song but once we heard the demo back we fell in love with it. It’s also the last track that we did with James Skelly from The Coral up at Parr Street Studios before we finished building our own Brassica Studios. I guess then, that it also has some of James’ influence on there and perhaps that’s why it has a sound that you may not have expected from us.

Get Outta My Brain was the next taste of the upcoming full-length and nodded to the more familiar punk tones on your previous material. Which of the two then, gives us the best idea of the overall sound of the new album?

I would say that ‘Get Outta My Brain’ probably swings more to the rest of the album but there is definitely a brighter sound overall on this record. We wanted to explore more of a cartoonish sound on this one compared with the last album which was very dour and dealt with a lot of harsh subjects, and so we wanted to go for a more vibrant feel this time around. We took huge inspiration from the great Haçienda era of music but instead of doing it with technology, we’ve done it with instruments. The Happy Mondays were one of the leading band’s in that golden era of music and their debut album called Squirrel and G-Man Twenty Four Hour Party People Plastic Face Carnt Smile (White Out) was just pure rawness, and so we took a lot of inspiration from that.

Speaking of cartoonish, the album’s artwork- designed by Tomas Walmsley- has taken on more of a cartoon style compared with the black metal-esque cover art on your previous album, Nihilistic Glamour Shots’. How did you guys meet? And what was the inspiration behind this new artistic direction?

I must say, the intention for the first album was always to have a cartoonish style to it because that’s who we are, but with our mental health states at the time, we wanted the album to reflect what we were going through. We had also just been to the black metal museum in Oslo, Norway, which is basically this dungeon full of the strangest artefacts, and so that definitely had a huge influence on how the album ended up turning out (laughs). Amanita Pantherina is where we want to be now. It’s us going back to the whacky, explosive music that we always wanted to create in the first place.

Tomas has always been in the circles of Manchester’s art world and is an incredible ARTIST (we were told by Lee to capitalise that last word) and so we have always known him. Recently, his work has really started to take off and so we got in touch with him and it was a match made in heaven from the get-go.

Nowadays, cover art can often be overlooked because most people aren’t buying physical records anymore, but we think that the cover art is essential when it comes to telling us about the band and the album that we are about to listen to.

Yeah, definitely. It’s your first impression. I mean, they say ‘don’t judge a book by its cover’ but I think that you have to at least it into consideration. I’ve always found that artwork can sometimes be just as highly regarded as the music because some of the all-time iconic album covers that you see will always be instilled in pop culture. I think any musician that is truly driven by art, will put as much thought into their artwork as they will their music.

So, the album is your first bout of material that has been entirely recorded and produced by yourselves. Does that reflect in the sound of the album? In the sense that there are no third parties imparting their influence on it.

Definitely. The main drive for this album was that we didn’t want to be precious with the sound. We wanted it to be raw. Our long-term collaborator Chris Stockton was the man who actually worked the computer, but in terms of the production, we all had a major hand in it.

We’d been to the huge studio and done the big label album and I wouldn’t change that for the world. But I think this time, we just wanted to dial it back a bit and experience something new for ourselves that we had never done before. I mean, our first-ever EP- Le Chou- was self-produced but it was done in a bedroom, so the difference between that and having our own studio with all the equipment is totally different. The studio, which is called Brassica, will eventually be a fully functioning studio where we can bring other artists in to record.

And has it always been the plan to have a studio where other artists can record?

I would say it has definitely developed over the course of the band’s career. I mean, when we started out, we didn’t set our sights too high. All we wanted to do was record an EP, put it out there to show people our art, and that was good enough for us. As it turned out, we got a lot of attention and then, of course, the old ambition list came out which was to play Glastonbury on the John Peel Stage, see our album in HMV and play a sold-out show at the Manchester Ritz, and we did all of that in the first two years as a band. So for me personally, I came to a bit of a crossroads where I started to think that maybe I’ve set my sights too low here and that we needed to figure out what direction we wanted to take, and so opening our own recording studio just seemed like the perfect way to go.

Your lyrics are largely based on your anger at modern politics, and you’ve previously stated that you will always make sure that the band’s lyrics are relevant to whatever situation we are living through as a society, at the time of recording. What is your analysis of this year in the album’s lyrics?

We’ve always had this kind of running joke that we can predict the future, and the track Medicine has sort of turned into this envision of COVID-19 prior to it happening. When you talk about things that are at the forefront of society, you will always be able to find meaning within the lyrics. Brexit has also played a huge part in everybody’s life in this country to the point where we feel drowned by it, and that’s referenced on the track Raus! which is probably one of my favourites on the album.

Amanita Pantherina will be released via the band’s own Brassica Records on September 25th. Pre-order here.

For the latest on Cabbage:

Are you excited for the new album dropping? Let us know on Twitter @CelebMix!