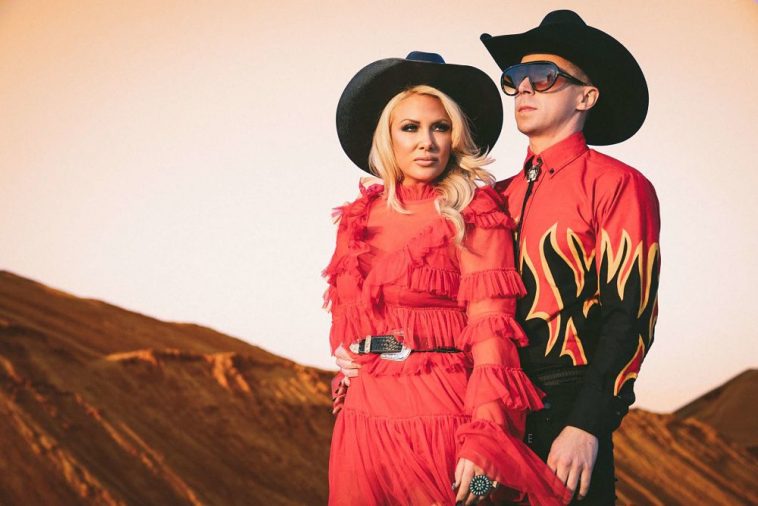 Yacht Money are a husband-and-wife-studio-rat-duo that ventured out of their lair during a pandemic to put out epic songs which become the soundtrack to badasses everywhere in 2020 and beyond.

“We penned their name after being inspired by Leo DiCaprio’s character, Jordan Belfort, in the legendary movie, Wolf of Wall-Street,” the duo tell CelebMix. “Cause who wants to make “regular money”?!”

We have been safe. We’ve worn our masks even when we have co-writers over. We’ve kept busy making our songs while building our studio in our house we bought in Feb this year.

Speaking to CelebMix on their smash hit single ‘Fire Love’, duo reveal they wrote it with a Nashville DJ named Johnny Grande and a new country artist named Gabrielle Mooney. “We blended up something that sounded like an old Johnny Cash song, with some 808s, dusty Spaghetti Western guitars, and a pinch of Dolly Parton like vocals,” the say. “The sound is something that sounds like a Tarantino movie soundtrack. It’s epic.”

Yacht Money’s single was featured at this year’s SuperBowl:

“Meeting Gabrielle Mooney was kind of wild,” they continue. “She features on our song ”Fire Love”.” “We thought ok – she kind of sounds cool,” Yacht Money add. “Let’s meet her.”

Yacht Money met Gabby through a friend they were producing for and he said there is this crazy girl he met at a coffee shop. He said the three of them all acted the same and were cut from the same cloth.

Gabby walked in and instantly we all clicked. She has a great voice, can sing & spit bars, is a former choreographer, writes her little ass off, and she talks all twangy and is funny as hell. So we loved her and still are in love with her.

Yacht Money are working on a full length album at the moment. “We have about 8 songs now and need about 6 more,” they add. “We’d like to play our first show possibly in 2021 so people can get to know that side of us as well.”