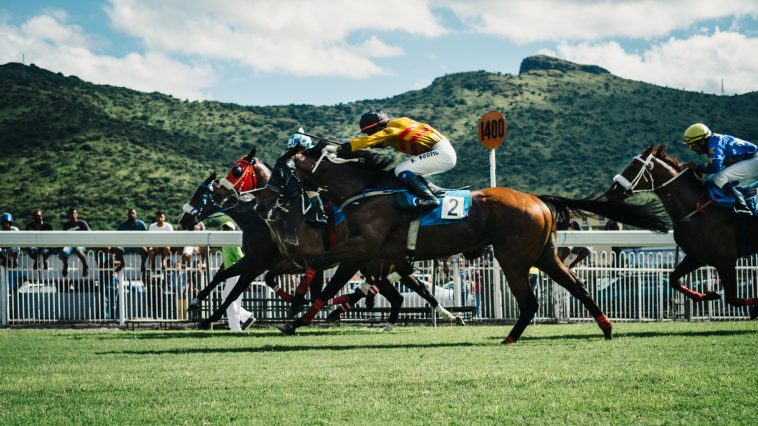 Is it possible to win millions betting on horse racing? Well, one lucky stable boy called Conor Murphy wagered $75 on all his bosses’ horses winning a competition back in 2006. And to his surprise, he won $1.5 million—instantly affording him his own stable.

Unfortunately, not everyone can turn $75 into a million dollars, which is why celebrities prefer to wager like high rollers. Like Murphy, though, famous people don’t bet on horses for the fun of it alone.

Indeed, some of the most famous horse racing punters have strategies and guidebooks they use to place wagers. Discover more below.

Celebrity chef and restaurateur Bob Flay says he’s loved horse racing since he was a young boy. He’s a religious fan of the Kentucky Derby, an annual competition he’s attended for over a dozen times.

With such a long-term passion for the sport, it’s not surprising Flay owns more than 20 horses and regularly bet on them at the bookies. In fact, he has a handful of ideas on the best way to conquer bookmakers.

Most importantly, the famous chef advises people to avoid triples and exacta bets. For the uninitiated, the former describes wagering on the race winner and the first runner-up. On the flip side, a triple bet means picking the first three horses.

“Most people don’t go to the windows to collect when they bet those,” Bob Flay once told Forbes.

She starred in 10 (1979 comedy film), Tarzan and Fantasies in the 1980s. She also dabbled in modeling before becoming a horse owner and activist. These days, the former Golden-Globe Awards nominee spends most of her time around horses.

Derek is mainly vested in thoroughbred clubs where she strives to promote the welfare of horses. And similar to Flay, the 63-year-old also bets on horses from time to time. However, she admits that she mostly backs breeds associated with people she knows.

Of course, she understands her strategy isn’t the best way to win. And she isn’t into betting for the money, anyways. But if you are, find some great suggestions on the best horse racing betting sites and the best strategies to use.  That way, you get the most value from your bets.

Emmy Award winner Carson Kressley is famously known for his roles in Queer Eye, Dancing with the Stars, and RuPaul’s Drag Race. But for people who fancy horse saddling and racing, they know him as a respected horse show exhibitor.

Similar to Bo Derek, Kressley isn’t the most successful horse race bettor out there. In fact, he says he’s tried multiple strategies but never got lucky. At long last, he settled on only making one wager per tournament: the race winner.

Kevin Dillon needs no introduction. He’s been nominated three times for the Emmys for his role in HBO’s Entourage. He’s also appeared in over 20 more films and TV shows, including NYPD Blue, Underdogs, Medusa’s Child, and The Delta Force.

That said, Kevin Dillon loves a good dose of horse racing action. In fact, he regularly bets on his favorite thoroughbred even though he admits he’s not an expert at it. As such, he prefers to wager on the favorites so that he can win easily.

There’s an emotional benefit to this as well. According to the Entourage actor, he takes pleasure in knowing his bets aren’t going into waste. The feeling of winning-which happens more frequently when he wagers for favorites—is what keeps him betting.

Truth be told, the horse probably deserved it. Very few horses have won the Triple Crown in the last two decades. And now that the horse belongs to his friend, it was only befitting to honor the thoroughbred in the best way he knows how.

Sambora never revealed whether he wagered on American Pharaoh. But he’s a known horse racing punter. And as he admits, there’s nothing he doesn’t predict. He wagers on exactas, trifectas, or any outcome thinks will win.

“I try to spread it around because then you have a better chance,” Sambora once told reporters.

Unlike any other celebrity on this list, Australian billionaire Zeljko Ranogajec bets like he has a bottomless pit of cash. Despite that, he takes long lengths to hide his betting dealings.

If that surprises you, it’s because bookmakers don’t like successful bettors so much. Many millionaire gamblers have stories of having their betting accounts closed for winning too much.

Ranogajec’s complex betting system involves identifying the most wagered bets by regular people or small but “sure” margin where he bets millions of dollars. Unsurprisingly, he’s believed to contribute a third of Betfair Australia’s revenue.

The notoriously secretive billionaire has a team of over 300 independent contractors who helps him win bets. Luckily, his methods work tremendously, helping him earn hundreds of millions.

Actress Elizabeth Banks, known for her roles in The Hunger Games, The Lego Movie, Modern Family, and the 40-year-old Virgin has an interest betting strategy. On the one hand, she picks a horse likely to win.

On the other, she pairs it with another breed with long odds. Elizabeth then combines the two horses into an exacta with decent odds. It would be interesting to know how much the actress has won from her wagers. But one thing is clear. Her strategy is pretty smart.

Actor James Marsden has been involved in as many movies as horse tournaments. He’s not a jockey, but he fancies watching races and sometimes betting on them. The Teen Choice Awards nominee, however, gives betting advice no one should probably take seriously.

“You always got to go with the best name, right? Marsden once said lightly when asked his best betting tip.”