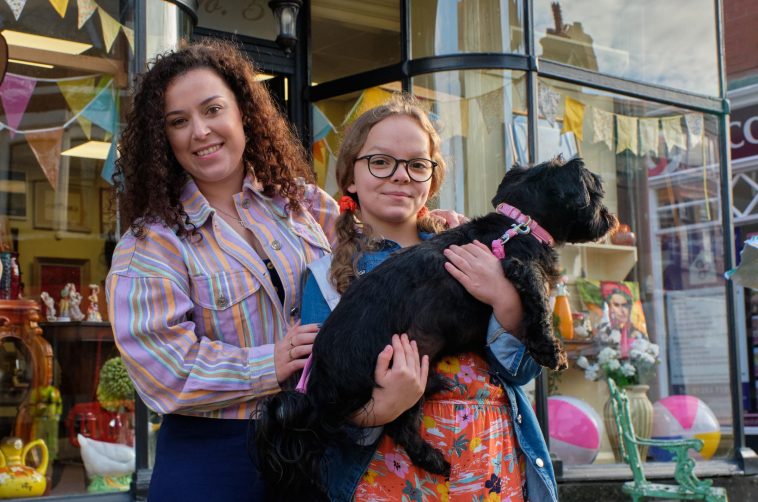 Iconic CBBC character Tracy Beaker returns to the small screen this Friday for My Mum Tracy Beaker, a three-part series based on Jacqueline Wilson’s novel of the same name. Here, Dani Harmer talks the new show, which premieres at 5pm Friday on iPlayer.

Tell us about Tracy Beaker now she’s all grown up?

So Tracy now is a mum! Which is amazing, I think the last time we saw her she was working as a care worker in her 20s. Now she’s in her 30s and she’s a mum so it’s been really cool for me because like everyone else, I really wanted to know what happened next and where Tracy’s journey is going to take her. I think everyone is going to be really pleased seeing how Tracy’s progressed and what a great mum she is.

Have you brought any of your real life mum skills to the role?

Oh yes, I’ve definitely brought my mum skills with me, though Jess is a bit older than my daughter. My daughter’s only four but I thought back to how I’ve changed from pre-Avarie to now. Having a child changes you completely, your whole priorities change, your whole perspective on life. You realise what’s really important and I wanted to make sure that really came across with Tracy as well. Before she would get really angry over the smallest things but now her priority is Jess and she’s massively protective of her, maybe a little bit too much.

What advice would Tracy give to her younger self?

If Tracy could give herself any advice it would probably be to just calm down a bit, just chill! You don’t have to get so angry all the time. Although, saying that, as an adult she does tend to get a little bit angry! But not as much.

Tell us about the relationship between Tracy and her daughter Jess?

So Tracy and Jess’ relationship is a bit more like friends because Tracy had her when she was a bit younger. They’re very different, Jess is quiet, she’s really good at school, she loves reading whereas Tracy obviously wasn’t any of those things! But that relationship is really nice actually, sometimes it almost feels like Jess is the mum figure, she really looks out for her mum. Tracy is a fiercely protective mother and does everything for Jess.

Tell us about Sean coming into their lives.

Sean turning up out of the blue is a bit of a shock for Tracy. She doesn’t recognise him at first, but actually they knew each other when they were younger. I think when Tracy first sees him, it’s not an instant attraction, it’s almost a bit like nostalgia, when you see someone from your childhood and you immediately go back to being that age again. When you’re a mum, you kind of lose who you used to be a bit and with Sean coming back into the picture, Tracy is reminded of what she used to be like when she was younger. A bit crazy, free and more wild, I think she did miss that side of herself, so with Sean showing up it brings it back again.

Tracy is whisked away to a life of huge mansions and fancy cars, have the locations been very luxurious?

The mansion was fantastic, I loved it, it was absolutely huge! It was really nice to work there, they have a pool, who has a pool in their house? Not me! I want one! But I don’t think the life of luxury works for Tracy. She has to change herself too much to fit into that world and that’s just not her. We’re so used to seeing her be really strong and independent so seeing her go through this journey, almost trying to change herself for a bloke just feels wrong. I hope the audience notices that too, it’s not really who Tracy is, she’s just trying to give her daughter a better life.

We hear there are some old friends – and foes – returning?

Yes, we’ve got a few returning characters. The audience will be very pleased to know that Justine Littlewood is coming back. Obviously that’s not going to go well. Tracy and Justine have butted heads since they were younger and nothing’s changed there really.

So there’s the same rivalry between Tracy and Justine?

As soon as you put Tracy and Justine back in a room, they both become ten years old again and just want to hit each other, pull each other’s hair and say nasty things to each other! That part of it will always be there with those two.

What did you think to Stormzy sampling the Tracy Beaker theme song?

Well that gave me a bit of street cred! I didn’t actually know who Stormzy was, everyone was texting me and I said, “What is a Stormzy? What does that do?” and then I realised actually that’s very, very cool. So thank you for giving me some street cred Stormzy, if you wanted to collab on anything, if you needed me in a music video, you know where to find me.

Why do people love Tracy Beaker as a character so much?

I think people love Tracy because everyone can see a little bit of themselves in her. She has so many different emotions, just in one day, she can go from being really sad to really angry to ridiculously happy and everyone can find a little bit of Tracy in themselves. She comes across as fierce and a bit scary, but underneath it all, there’s a heart of gold there. I think people just love how independent and fierce she really is. I hope that’s why people like her, that’s why I like her.

When we first brought out Tracy Beaker, there weren’t really many strong female characters, especially in kids TV, there was a lot of slapstick comedy, so for me to be able to portray this awesome female character was just a dream come true. I’m really glad it’s stood the test of time because women are awesome.

What’s it been like working with Emma who plays Jess Beaker?

Emma blew my socks off, from the minute I met her, her confidence… actually she reminded me of me when I was younger, to be honest, nothing phased her at all. I can’t wait for everyone to see her performance because my goodness, she has got such a bright future ahead of her.