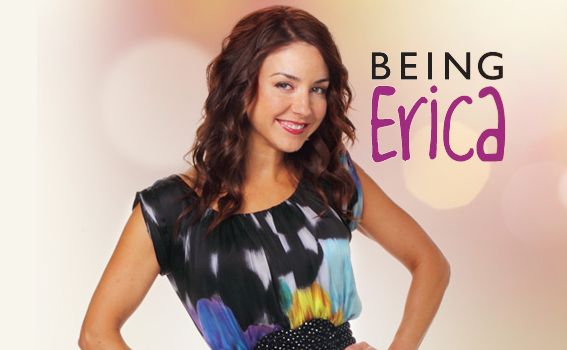 There are some iconic TV series that we will never forget, and Being Erica is certainly one of those shows. It was shown between 2009-2011 and had four full seasons, coming to a natural end on the last episode. Fans were devastated when it ended and there were talks of the US and the UK to make their own adaptions of the series, which never came to fruition. Fans are still obsessed with the TV show – we sure are – and so when Erin Karpluk revealed she has something special coming up on her Instagram for Being Erica fans, we couldn’t hold in our excitement.

The following day, she posted a collage of 16 images from the cast of Being Erica who are sharing inspiring quotes. Anyone who has watch Being Erica will know that in every episode Dr. Tom Wexlar (played by Michael Riley) says a quote, usually to Erica Strange (played by Erin Karpluk), that explains the situation, her feelings, to inspire confidence or any other number of relevant reasons.

She followed that post up with posts of the individual cast members of Being Erica, and after many people wondering where Kai Booker (played by Sebastian Pigott) was, the team managed to track him down so he could be included too, which she replaced with Adam Fergus (who played Adam Fitzpatrick). Adam Fergus’ quote that he chose was: “In the middle of difficulty lies opportunity” – Albert Einstein.

In the first breakdown, we see Anna Silk (who played one of Erica’s uni friends, Cassidy Holland) holding up a handwritten quote which says: “It is impossible for you to go on as you were before, so you must go on as you never have.” – Cheryl Strayed.

Next, we see Dillon Casey (who played one of Erica’s boyfriends, for a short while, named Ryan) with the quote: “It’s hard to make predictions. Especially about the future.” – Yogi Berra.

Then Paula Brancati (who played Erica’s best friend, Jenny Zalen) holding up the handwritten quote: “There is a universe inside you. Heavy and light.” – Melody Hanson.

The fourth person included in the first group was Joanne Vannicola (who played Dr. Tom’s therapist, Dr. Naadiah), who is holding up a sign with the handwritten quote: “I am not free while any woman is unfree, even when her shackles are very different from my own.” – Audre Lorde.

The second segment starts off with Reagan Pasternak (who played Erica’s boss and later business partner, Julianne Giacomelli) who has written a note for us all saying: “This too shall pass… (Hang in there).”

Next up was Jamie Spilchuk (who played Alex Berlin, a guy from Erica’s high school years) who is holding up a handwritten sign with the quote: “Keep your head up in failure and your head down in success.” – Jerry Seinfeld.

Following up next is Morgan Kelly (who played Julianne’s former assistant, Brent Kennedy), who is holding a typed sign that has the quote: “It takes a lot of courage to grow up and be who you really are.” – EE Cummings.

Last on this segment is Grace Lynn Kung (who played Julianne’s assistant at River Rock Publishing for nine episodes, named Meeri) who is holding up a quote on her phone with a rainbow background which says: “Bad days happen to everyone, but when one happens to you, just keep doing your best and never let a bad day make you feel bad about yourself.” – Big Bird.

The next group kickstarts with Vinessa Antoine (who played Erica’s other best friend, Judith Winters) who is holding a printed quote on a piece of paper that says: “When you focus on the good, the good gets better.” – Abraham Hicks.

Then Sebastian Pigott (who played Kai Booker, someone Erica befriends and finds out is also under the same type of therapy as herself) is next holding a bright sign that says the words: “Don’t panic.”

Adam MacDonald (who played Erica’s brother-in-law, Josh McIntosh, married to Erica’s sister, Sam) follows next who is holding a handwritten sign that says: “Hang in there.” In addition to a smiley face and a small sentence that also says, “Listen to more Nirvana.”

The last cast member in this segment is Jadyn Wong (who was Julienne’s assistant at River Rock Publishing for all of six episodes, named Rachel) who is holding a handwritten sign with the quote: “We can do hard things.” – Glennon Doyle.

The final segment starts off with Erin Karpluk (who played the title character, Erica Strange) who is holding a printed piece of paper with the quote: “Pressure makes diamonds.” – George S. Patton Jr.

Next up is Michael Riley (who played Erica’s therapist, Dr. Tom Wexlar) who is holding up a printed quote which says: “Without great solitude. No serious work is possible.” – Pablo Picasso.

Following up is Devon Bostick (who played Erica’s brother who passed away at 13 years old, named Leo Strange) who is holding the handwritten quote: “We are here to help each other get through this thing, whatever it is.” – Kurt Vonnegut.

Lastly, Joanna Douglas (who plays Erica’s sister, Sam Strange) rounds out all the quotes from the Being Erica cast with a handwritten quote from the Bible which says: “Be still, and know that I am God.” – Psalm 46:10.

We truly miss Being Erica, and although season four wrapped it up perfectly and allowed it to come to a natural ending, it also left it open enough that they could easily return to the Being Erica world and do another series – oh how we wish.

We love that the cast of Being Erica came together for this quote special, that certainly took us back. Thank you, Erin Karpluk, for putting this together, it truly spreads love and positivity amongst the fans, right when we needed it most. We so wish a reunion was on the cards at some point or even a remake – regardless we can always just binge-watch Being Erica all over again!

Which was your favourite quote from the cast of Being Erica? Do you have any favourite memories? Let us know on Twitter @CelebMix.