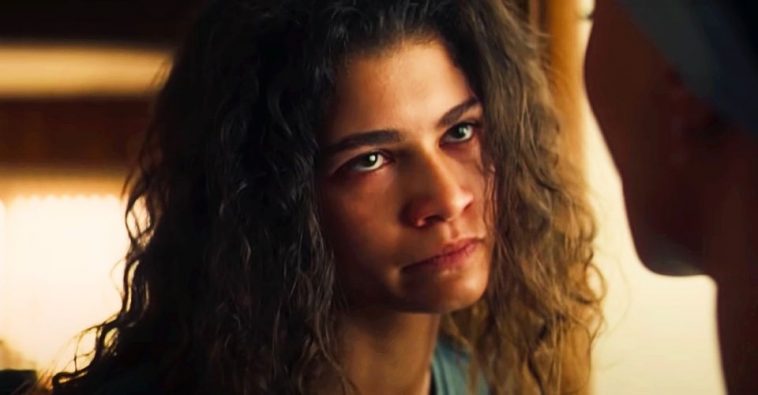 If you have any sort of an online presence, you will be aware of the internet’s favourite tv show, Euphoria. The hit television series has become somewhat of a cultural phenomenon, influencing fashion and makeup trends, birthing career heights for some of their stars, and opened up very strong conversations across social media about issues presented in the show. Despite the show being very loved online, many also have critiqued the show for somewhat ‘glamourising’ drug addiction.

Euphoria is a show that has gone viral multiple times for its aesthetic. Season two is shot on Kodak film, giving the viewers a gorgeous cinematic experience while watching it. The episodes are filled with beautiful shots, such as the carnival episode of season one, and more recently, season two episode five closes with a shot of Cassie crying surrounded by flowers. The viewing experience is truly incredible. Styling is also a key moment in Euphoria, with characters such as Maddy, Kat, and Jules being at the forefront of aiding trends within different subcultures. Maddy is renowned for her incredible eyeliner, diamantes, and out-out outfits. Kat holds a more alt edge, especially in season one, while Jules is very hyper pop with glitter and bold colours showing her self-expression. But why is this important in a piece about Euphoria and addiction? Well, none of these characters are Rue, the person who Is an addict.

In comparison, Rue is very, VERY rarely seen with makeup on. Hell, its rare for Rue to even have brushed hair. Compared to her schoolmates, Rue is consistently in baggy clothing that looks like it has been through the trenches. Through parts of season one, Rue begins her journey to sobriety, which is when we see a switch. Rue wears makeup and looks more put together, looks happier and we see her relationship with Jules thriving. However, as season two hits, this all drastically changes.

In season two, Rue is at rock bottom and there is no denying it at all. She looks grey, unkept and is completely isolated from her other friends such as Maddy, Cassie, Lexi, and Kat. The only people we see her with thus far for extended periods of time are Jules and Elliot, her new drug buddy. Even then, her relationship is falling apart with Jules BECAUSE of her secret relapse and the strain is evident in every shot together. Whenever Rue is seen, she looks distant, like she is physically present, but her mind is elsewhere. During season two episode four, Jules and Rue are engaging in sexual activity and Rue fakes her orgasm because she is so high, she cannot feel anything, which pushes Jules away as she can tell Rue was not aroused by her. Episodes one to four of the latest season show Rue falling deeper and deeper into her addiction, but episode five is where the effects of addiction are most shown and ensure that anyone who claimed drug addiction is glamourised by Euphoria were proven wrong.

After Rue gets access to a $10,000 suitcase worth of drugs from Fezco’s supplier with intent on selling them, she begins to excessively take the drugs herself. Elliot, who knows she is doing this, tells Jules who then tells Leslie, Rue’s mother. Episode five opens with Rue raging around the house, throwing storage around trying to find these drugs that have now gone missing, and screaming in Gia (her sister) and her mothers face about how much she needs them. Rue is in an almost manic state while demanding her family tell her where they are, showing her withdrawals beginning to take effect. Rue then breaks down, sobbing about how desperately she misses her deceased father and how much she hates being an addict but cannot stop taking them.

The episode ends with Rue at Fezco’s suppliers’ house, with her withdrawals worsening by the second. She is begging to be given any drug by this woman to lessen her pain, and after being given morphine, wakes up locked in this woman’s house. This was significant as Laurie told her that if she swindled her out of the drug money, she would kidnap her and sell her to ensure she gets it back. That is the reality of addiction. Rue is self-aware and knows that she is not the easiest to deal with, she knows how much it affects her family and her other relationships. She knows it’s a death sentence, but she cannot stop. She has swindled a supplier out of thousands of dollars, knowing what the risks are, but her addiction is so bad that she is resulting to the extreme. That is not glamourising, that is showing how extreme drugs can turn people.

Whether we want to accept it or not, drugs are becoming more and more accessible to a younger demographic and becoming more desirable too. 591,000 teenagers aged 12- to 17-years-old in America have used an illicit drug other than marijuana in the last month alone. Drugs are not taboo for teenagers, but the effects that they can have been hidden away. Euphoria is showing the harsh and incredibly terrifying reality of drug misuse. The show is consitstent with highlighting the stark difference in the lives of the remaining cast and Rue, the show’s addict, to make sure it is clear how different it is. Euphoria is the most popular show on television right now, with Zendaya as the lead actress. It is a hard watch, but the content of her plotline is so important to steer young people away from ever heading down the wrong path.

If you are or know of anyone struggling with addiction, the Euphoria website has resources for US citizens. For UK citizens, Turning Point and Mind have helplines also.