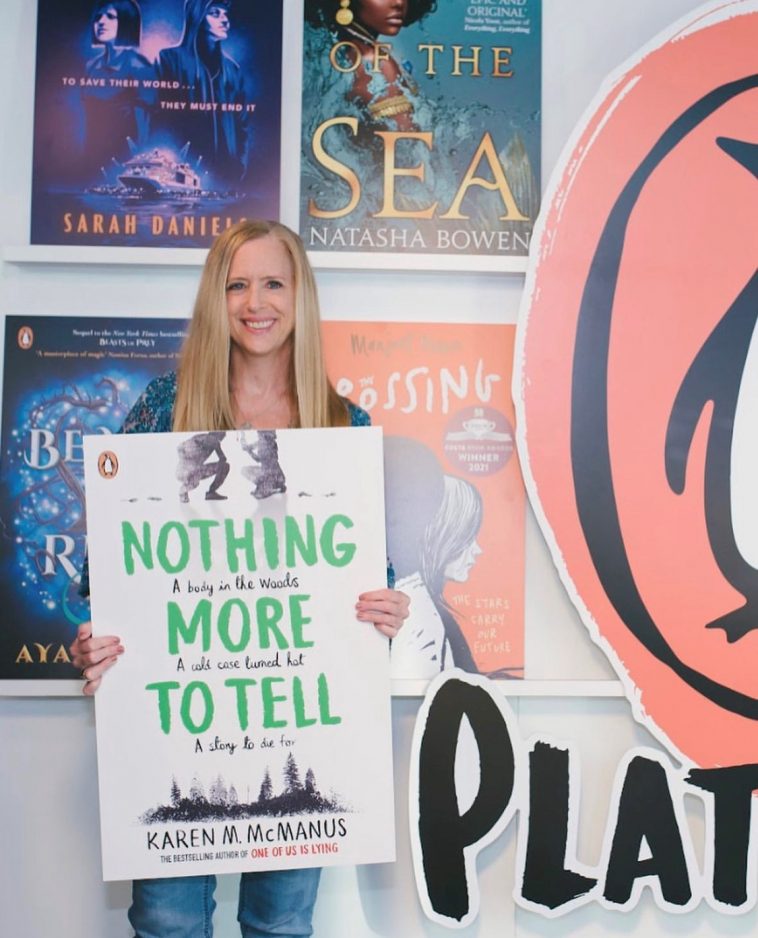 Bestselling author of ‘One of Us is Lying,’ Karen McManus is gearing up to release her latest book ‘Nothing More To Tell’.

“With all my books I always make sure I can sum them up in one sentence, so the sentence for this book is: A teen journalist investigates the cold case murder of her favourite teacher whose body was found by her ex-best friend turned nemesis.” is how Karen sums up ‘Nothing More To Tell’ when we chat to her on zoom about the upcoming release.

It’s a standalone novel which centres around Brynn who left Saint Ambrose School following the shocking murder of her favourite teacher. The case was never solved, but she’s sure that the three kids who found Mr Larkin’s body know more than they’re telling, especially her ex-best friend Tripp Talbot. He’s definitely hiding something.

When Brynn gets an internship working on a popular true-crime show, she decides to investigate what really happened that day in the woods. But the further she dives into the past, the more secrets she finds.

Four years ago someone got away with murder. Now it’s time to uncover the truth . . .

“Every book is different. But this one was challenging because it was my pandemic book.” She says when discussing the writing process for ‘Nothing More To Tell’. “I wrote it in 2020. And it was just hard to focus. It wasn’t jelling for a while and I just couldn’t work out why as it was a really solid mystery.

So I had this really frenzied weekend where I tried lots of things to fix what was wrong. But I didn’t really know what was wrong. And I ended up recasting the main characters.

The two main characters were just not right and they had no chemistry, they didn’t fit the story. I plucked them out and put new people in and after that it was a breeze.”

Having written six hugely successful books and had one turned in to a Netflix show, Karen knows her own work enough to know when something isn’t working ” I knew it wasn’t working and I just had to take a step back. I give myself some time because sometimes things just aren’t working for that scene or for that day. But later it smooths itself out. So it’s more if I’ve been heads down for a while and I feel like I am not getting it then I do a few things and I definitely pull in my agent (Rosemary Stimola).

She is just a phenomenal brainstorming partner. So I’ll send her what I have and say I don’t know what’s wrong can we talk about this? Give her time to read it. But for this book I kept trying different things like first I tried swapping the beginning, changing out where the book started. And that didn’t really seem to help, and then I plucked some characters from another book and put them in just to what that would do, not that I was going to use them. It didn’t obviously work but I did feel there was better energy. That’s when I started thinking that maybe it’s the characters that are giving me a hard time.”

Nothing More To Tell’ is Karen’s sixth book and 4th standalone novel which if you’ve read her previous work you are going to love. And if you haven’t read her work before it’s a great starting point as an introduction to her work. “It’s a great representation of who I am and how I write my books. Other than the One of Us series, you don’t have to have read anything to be able to read my standalone.

I will say with this book because there is a true crime backdrop I put little easter egg mentions of some of my other books which will be fun for people that know them. But you don’t have to know them to enjoy the book. They are very small asides, woven into the background of this true crime internship. So you can pick it up without having familiarity with any of my other work.

But I think the tone, the characters and the way the mystery unfolds it’s all my signature style.”

‘Nothing More To Tell’ will be released in the US on 30 August and 1 September in the UK, you can pre-order it now!