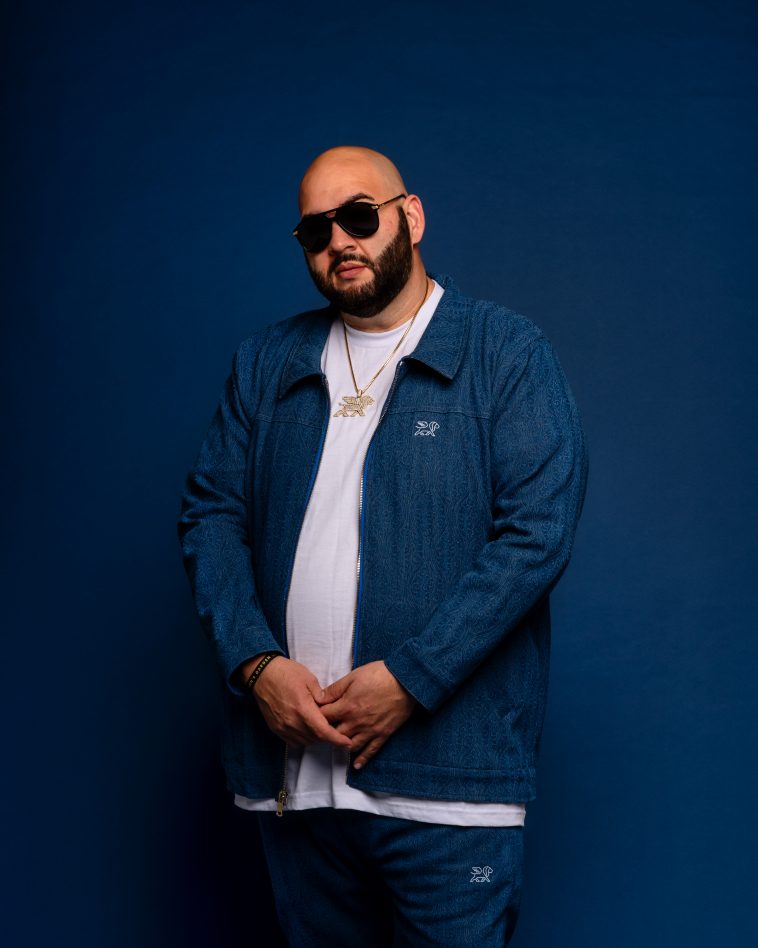 We talked to San Diego-based award-winning entertainer, entrepreneur, branding genius and rapper Biggie Babylon who recently released his latest music video for his new joint titled “All In,” directed by Damien Sandoval.

Biggie Babylon has performed all over the world, from Paris to Dubai and Mexico, has been booked as the opening act for Mobb Deep, Ty Dolla $, Twista, Nappy Roots, Devin The Dude, Chingy, and Coolio, is an SXSW official artist, and has won multiple awards thanks to his chart-topping releases.

We talked with him about his latest release, future plans, and what inspires!

Congratulations on the release of your new music video, “All In,” we loved it! How does it feel to drop music during the pandemic? Are you excited to perform it once things get back to normal?

Thank you! I am happy to share my video for “All In” and I am humbled by the response it has been getting around the world since its release. When the pandemic hit, I was in the middle of promo tours around America.  I had just finished the West Coast, Midwest, East Coast and I came home to do a few local shows in San Diego before hitting the road again to Florida and the South.

I remember it was March 12, 2020 and I was opening up for Twista.  On the day of the event is when the news was hitting that venues would start having lower capacities because of the Covid-19 outbreak.  I killed it on stage that night but I could just tell that something felt different and things were about to change.  In the next few days, everything was shut down completely and we were told to stay at home.  All my promo runs got cancelled, all my bookings were postponed, and even the SXSW festival where I was an official artist got cancelled.  The news media was really doing its best to scare people and since I have a wife and a toddler at home, we took it very seriously.

For the next six months or so I thought my music career was coming to an end because everything around the world was still shut down. I got to the point that I didn’t really even enjoy listening to any music at all.  It was just news and more news which is pretty depressing.  I met up with my producer and friend, Thom Genius, and we were talking about this and he kind of convinced me to get back into the booth and release more music and spread it online until things open up again.  So that is what we did! We recorded “All In” that night and released it online shortly thereafter.  It started doing great numbers online and big DJ’s were playing it on FM and satellite radio.  I was also getting incredible feedback on the new sound that I put out and I knew that I needed to put out a music video as well.  That’s when I brought in Damien Sandoval to help tell my “All In” story visually.

What are the biggest challenges you faced while recording the music video with Damien Sandoval while the entire world was facing restrictions?

By the time we shot the music video for “All In” it was early February 2021 so almost a year had gone by since the pandemic started.  At that point, I would say a majority of people knew how to maneuver in any given environment. The director, Damien Sandoval, ensured me that we would put all the proper precautions in place on shoot day to make the cast and crew comfortable being on set.  There were about forty people on set that day and everyone was screened before entering, temperatures were checked, and we had ample hand sanitizer and hand washing setups throughout the venue.  We also practiced social distancing as much as we could while not rolling.  I did have a few friends/tastemakers that were supposed to be cameos in the video that declined coming to the shoot because of Covid concerns but that didn’t deter us from having a great shoot day!

How was it to work with Thom Genius on “All In”? Tell us more about the process and creative connection between him and you?

Before we recorded “All In,” I told Thom Genius that I was done recording music. Although we spoke all the time and remained very good friends, it was the first time in a few months that we got together in person because we were both quarantined.   We smoked a couple blunts and he reminded me about how far I had come in my career and how close I was to actually breaking.  He sort of convinced me to get back to making music.

So that night, we started listening to some of the beats he had recently made and I heard an instrumental playing that I really liked and I knew that was the one to use for my new single. It had a vibe to me that reminded me of Coronado island right off the coast of San Diego.  It wasn’t too much of a club type of beat which was great because clubs were still closed around the world.  We wrote the song and recorded “All In” over the next two days in Thom Genius’s garage since many of the studios were still shut down.  After I heard it mastered, I knew we had a hit that can help me crossover into the rhythmic side of radio and maybe even hit the top forty charts!

Your style evolved along the years, what is the biggest difference between what you would record 10 years ago and what you record now?

When I first started recording music it was as a joke.  I owned a studio but I was a behind the scenes guy.  I was managing artists and executive producing projects.  I never saw myself as a professional recording artist.  I used to write funny raps about things like relationship issues or funny customers at my dad’s liquor store that people genuinely enjoyed even though I recorded them myself as an amatuer engineer and they were really bad quality.  Then I was curious to see how I would sound if I worked with a real producer and engineer so I called up Josh Franks and he came by to my studio and we just instantly vibed.  We recorded my first real single, “Home Run Hitta’” and after hearing that song I couldn’t believe how good he made me sound and I knew that I could really do this if I put real effort into it. Over many years I put out rap and trap music, EDM music, and pop music.  I took the  feedback from DJ’s, messages from fans, reaction from live crowds, and studied streaming data in efforts to figure out what my sound should be. The music I release now is a culmination of all of that..

How did you come up with the concept of “All In,” both sonically and visually?

Thom Genius and I came up with the concept of the song “All In” while hanging out and smoking some of Babylon’s Garden exclusive cannabis.  I wasn’t there to record music that night but we got so high that we started talking about life and how the pandemic was getting me to consider retiring from being a recording artist.  He was totally against that idea and convinced me to go “All In” on another single and we wrote and recorded the track that night and the next day.  After getting great feedback on it, I knew it needed a visual so I had my manager reach out to a wishlist of directors I had made over the years.

On top of that list was Damien Sandoval out of Los Angeles.  When he heard the record he was interested and I told him that I didn’t want just some generic rap video with nice cars, a nice house, and some sexy girls.  I wanted it to be more like a short film.  He sent over a few treatments and I chose the one with the underground casino environment.  We had the concept that I would be betting and I would keep losing until I ran out of money while I was surrounded by all kinds of distractions.  The “hater” villain, alcohol, drugs, sex, and so much more is going on but I am focused on placing my bets.  Soon I am out of cash and have nothing more to bet except for jars of my blood, sweat, and tears.  That’s when I start winning and take down the house!  We recorded the video and everyone involved knew that we had just created something special.  Damien and his production crew are incredible!

What’s the main message you want to channel through this new song? And to whom particularly?

Remember who you are and what you have accomplished, don’t worry about the haters or doubters, and go “All In” with everything you got.  Then, and only then, will you truly win!

Talking to the marketing genius that you are, do you have any other promotion plans to follow-up to The Loudpack?

The DJ Loudpack I invented still works to this day as a physical form of promotion.  The limitation that it has though,  is that I have to personally hand one to somebody for it to make the best impact.  It’s almost physically impossible so I realized that I need to use the internet more for promotion and to reach fans that I would never be able to physically reach.  I am using some of the best marketing people and PR firms in the world to help get the story out on me, my music, and the trendsetting DJ Loudpack.

Do your Chaldean roots play a role in the kind of lyrics and music you make?

My Chaldean roots definitely play a role in my lyrics and music.  I really appreciate my Chaldean tradition, culture, and lifestyle and I use those things to make music that is authentic to me which I think represents a lot of my people. Most people don’t know about the Chaldean people who are originally the ancient Babylonian people.  I feel like it’s my job to remind them who we are, our impact on history, and let them know that we are still here and thriving!

We’ve heard you are about to release your new album Coronado California, would you exclusively share with us its release date?

I have a ten track project that we are currently mixing and mastering titled “Coronado California.” Coronado, California is an exclusive island town just off the coast of San Diego.  It features a beautiful beach, luxury homes, an exclusive yacht club, and houses the world famous and iconic Hotel Del Coronado. It’s the embodiment of the California lifestyle that I live and want to share with the world.   I have set a release date of June 19th, 2021 and I can’t wait to share it with my superfans and new fans!  The project features songs from multi platinum producers Thom Genius and Mev The Renegade as well as Dabato and Josh Franks.

Any other upcoming projects?

I have a lot of music video plans for my new project that I am super excited about.  I am also finishing up the script to a feature film that I am writing based on an award-winning short film that I wrote, starred in, and directed in 2015.  Along with the music, I am always busy consulting and building brands such as Babylon’s Garden which has become one of the most popular cannabis lifestyle brands in Southern California and beyond.

Thank You Biggie Babylon! Let us know your thoughts on CelebMix.