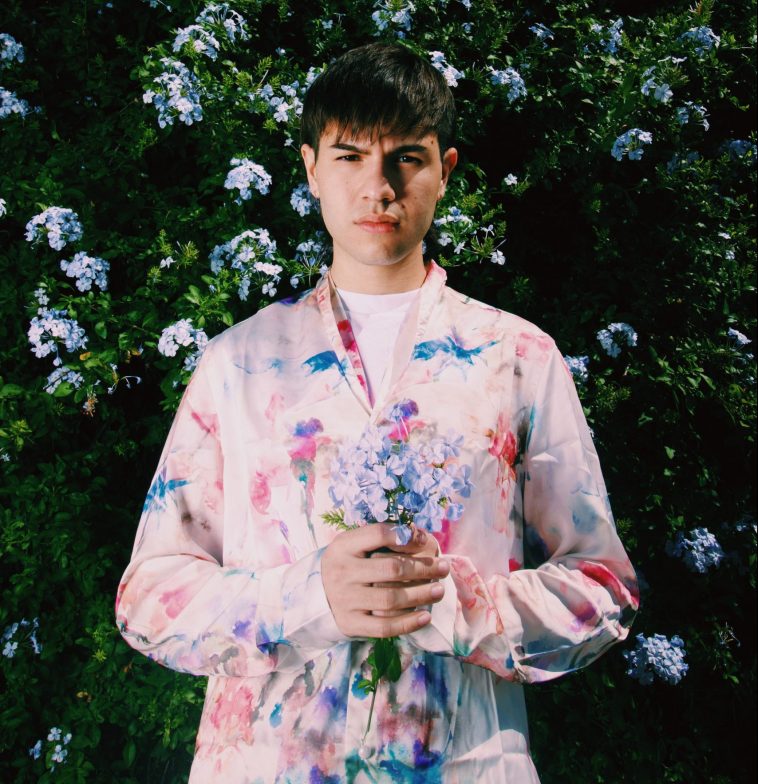 Viral TikTok sensation, Jiubel, has recently dropped his debut EP, “ren”, showcasing his versatility as a multi-genre indie-pop artist, and we got the chance to exclusively interview him. The release of this debut EP follows up Jiubel’s single “Orange Trees” which was the third single from this EP after “Notice Me” and “Scooby Doo”.

Jiubel, full name Jiubel Rodriguez, Jr., is a singer-songwriter, producer, and TikTok star who was born to Cuban immigrants. He was brought up in a Spanish-speaking household where he was encouraged to express his creative side, and one day during his sophomore year, when he was grounded for missing an SAT prep class, he downloaded a beat on his dad’s laptop, which had GarageBand on it, and he created his first song – to which he played it for his dad who said it was actually really good. This led to him dropping hip-hop tracks on SoundCloud, amassing over 2 million streams. He later turned to TikTok where he went viral for taking comments he had received as well as requests and creating a short rap track about that particular subject. In doing so, he’s gained a massive 2.7 million TikTok followers, and in 2021 he dropped his official debut single “Runnin” which went viral with 3 million Spotify streams, followed by the tracks “Rebirth” and “Make A Lover Mine” which have both racked up over a million Spotify streams. His ability to create music truly shows the superstar he is and it’s no surprise that his career continues to soar.

We recently chatted to Jiubel, via email, in a question-and-answer interview, where we discussed his recently released debut EP “ren”, his rap videos, and his TikTok fame.

Hi Jiubel, we hope you are well today. Can you tell us more about your debut EP “ren”?

Thank you for having me. My debut EP “ren” is a piece of work that displays the mood swings someone feels when in love with a certain individual. While listening to the project, it’s almost like a little movie playing in your head. In fact, that’s what I love most about the project, the fact that you can picture all the scenarios from the songs.

Where did you draw inspiration for this EP?

Lots of things inspire my creative process throughout the day. I guess you can say I drew inspiration from my fish tank, the beach, and playing video games. That might not make sense to some people, but those things put my mind at ease and helps create a clear canvas.

“ren” contains six tracks, what made you decide to collate these six tracks?

Together, these six tracks show the different stages you go through when you love a certain individual. It displays how sometimes the relationship you have with someone can be a rollercoaster of emotions.

The focus track on the EP is “Deceived”, can you tell us more about the track?

“Deceived” was an awesome song to create. I had some of the most fun creating that track. It was my last day in LA, and I wanted to create one final song, so I asked my boy Oscar [Scheller] to play me some loops and I chose two that I liked. From there, we combined them together to show the mood swing the song captures.

Talking about Oscar Scheller, what was he like to work with?

Oscar not only became a friend during the creation of this EP, but he also became a brother. Genuinely one of the greatest individuals I’ve ever met. He actually DMed me on Instagram and told me he loved my music, and when I replied thank you, he asked if I wanted to work. It just so happened that I was in LA, so we immediately got to work a day later.

“Deceived” stands out against the other tracks as you transport us into a daydream. How did you go about creating such a track?

That’s one of the things I love doing the most, creating such a transition in the song that you felt like you were transported into a daydream. The way I did that was by combining two of the loops that Oscar showed me and picking the two that would display the mood swing I had in mind.

All six of your tracks show your versatility as an artist, from the awesome guitar chords in “TV Static” to the drums heard in “Notice Me”. What made you decide to show such versatility?

Nothing made me decide to show my versatility, I just did that because it’s fun. In my opinion, showing no versatility in a project is really boring, it would have made the project stale.

This EP contains the three singles you have previously dropped, “Notice Me”, “Scooby Doo”, and “Orange Trees”, can you tell us more about these tracks?

These three tracks are special because they were the foundation of this project. They set the tone for the next three songs. A fun fact about “Scooby Doo” and “Orange Trees” is that they were both created in one session. It was almost as if they created themselves.

They’ve been received well by your fans and listeners in general. What’s it like knowing you’re making an impact with your music?

It means everything to me. It’s all I’ve ever wanted. Knowing my songs brighten someone’s day fills my heart with joy. I’m forever grateful for that.

You’ve also been making quite an impact on social media. What was it like seeing your followers soar on TikTok, reaching 2.7 million?

It changed my life. What actually made it surreal was when I went to go buy an acai bowl and the cashier started freaking out because he recognized me. That was my first time getting recognized in public and it was a cool feeling. it reminded me that the hard work would continue to pay off.

What made you come up with the idea to transform comments into short rap tracks?

You’ve gone viral on social media for your videos, are there any that are really memorable to you?

My favorite ones have to be the ones where I cover the song “Jugaste y Sufri”. Those are the most memorable in my opinion. It’s a corridos track with lots of emotion and everytime I cover that song people always show so much love.

Is there anything you wouldn’t rap about?

Obviously, there are some things that would be considered crossing the line and I wouldn’t rap about. Other than that I really do enjoy making raps about anything. It’s honestly one of my new favorite hobbies.

You seem to spread positivity in your videos mixed with humour. Is it difficult to choose which direction to go in for these short songs, or do they come naturally?

How long, roughly, does it take you to create these short songs, and then to create the videos? We have to admit, your flow and wordplay are incredible.

Thank you! It takes me roughly 15 to 20 minutes to create the songs and then another 15 minutes to edit the video. It really is a fun process.

How does creating these short videos and songs differ from creating and releasing official singles and tracks on your EP?

The only thing that differs is the topic of the songs, but the creative process is similar. I get a topic and I start writing about that topic. I also try my best to display imagery through the lyrics in order for the listener to picture it in their head.

Finally, have you got a message for your fans, followers, and listeners?

Thank you, Jiubel, for chatting with us in regard to your debut EP, “ren”, and your rise to TikTok fame. Your music is incredible and you certainly have a huge career ahead of you as you continue to go viral all around the world.

“ren”, by Jiubel, is available to download and stream right now, across all platforms, under exclusive licence to FADER Label. Don’t forget to check out his TikTok account as well as the rest of his awesome officially released tracks.

Let us know your thoughts on our interview with Jiubel on Twitter @CelebMix.