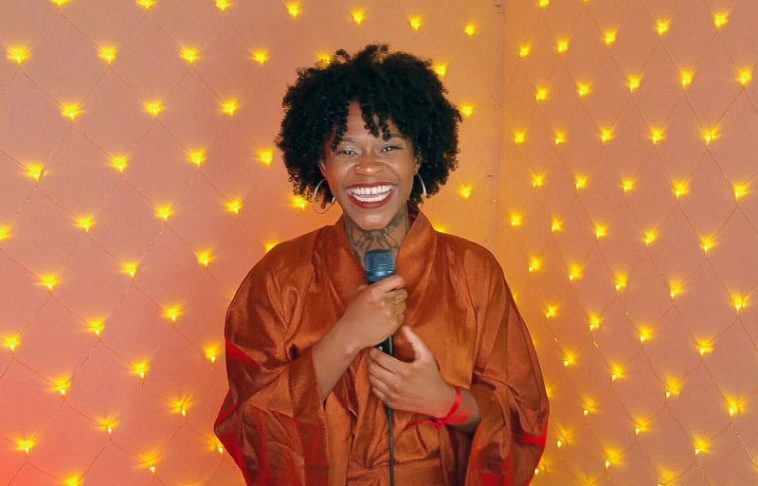 Just Sam, now known as Season 18’s American Idol winner, is proof that dreams really do come true. The 21-year-old subway singer from Harlem auditioned for the show with Andra Day’s “Rise Up,” and it’s now her debut single as the new American Idol winner. How crazy is that? VERY!

But things got crazier as Just Sam, along with the other American Idol contestants, were forced to be socially distanced. While the other finalists were able to perform at home with their family, Just Sam performed from the apartment that she had been staying at in Los Angeles, alone. Being 3,000 miles from her grandma in their New York apartment in the Frederick Douglass projects wasn’t what she necessarily wanted, but it was what had to be done to protect her grandma, Elizabeth.

All the hard work was worth it, because Just Sam is now the American Idol winner, with an exclusive record deal with Hollywood Records/Industrial Media’s 19 Recordings. Even separated from her grandma, we truly believe that their unbreakable bond is a big part of what gave Just Sam the strength she needed, along with God.

Throughout the season, we learned a lot about Just Sam. She never hesitated to show her true colors, whether she was shy, fearless, or vulnerable. Since day 1, she wasn’t afraid to shed a tear. Because tears aren’t always a weakness, it can simply show the passion within a person.

We caught up with Just Sam to discuss American Idol, new music, acting, her fans, and more.

Career wise, what do you think you’d be doing right now if you didn’t take the chance on American Idol under the current circumstances in the world? You shared so many clips on Instagram over the years singing in New York City, and they’re all so inspirational to watch.

Honestly speaking, if I didn’t audition for American idol, right now I’d probably be somewhere trying to figure out how to have a source of income without being able to busk because trains were shut down.

Do you still have the box that you used while singing in the subway?

Sadly, I no longer have my box that I used to sing with because my partner in Hollywood week accidentally took it home with her after she was eliminated the final round of Hollywood week.

What went through your mind before each of your “at home” performances?

Before performing at home, I would always remember that I had to sing to where I wanted to go, but I was also always feeling home sick. So I tried to use that as my motivation while singing. I had to remember that I was doing it for my grandmother and loved ones.

Is your grandma still in shock that you won, with it being a few days since you’ve won? Has she given you any new advice since winning?

My grandmother is still in shock ever since I won American Idol. She has been telling me that the fight isn’t over. That she’s so proud of me and now she just wants me to continue to focus on what’s important right now. She also told me that I have so many young girls looking up to me now, so I have to remain humble and focused on God, the way that I’ve been trying to be.

Do you plan on having any original music released soon?

I am currently working on original music that my team and I are hoping will uplift people during this time. I have a message so I want to take my time to perfect the music I put out. But, if I happen to fall upon the perfect song, I will definitely be releasing it soon.

Do you have an idea of what genre or the type of music you want to create?

R&B/Soul. I want to put out music that inspires people, like the music I listened to growing up. For example, songs like “Rise Up” by Adnra Day or “Stand Up” by Cynthia Erivo.

With lots of people creating music from home due to the current circumstances, do you think you’ll be staying in Los Angeles to work on your music, or going back home to New York City?

I plan on moving to Los Angeles. First, I would like to go back to New York City and quarantine for 14 days so I go home to my grandmother for a few weeks or so, because we miss each other.

How do you want your music to make people feel when they listen to it? Do you have a specific goal?

I want my music to be a motivation to people. I want people to feel like no matter what they are going through that they will get through it.

Aside from winning, what was one of (or a few of) your favorite memories from being on American Idol?

One of my favorite moments was praying with the judges. Another one of my favorite memories was during Hollywood week when the judges put the money in my box. And finally, in Hawaii I had one of my personal favorite performances, but it wasn’t only the singing, it was getting to know all of the other contestants on a deeper level, which is what makes the memory most special for me.

Your style is always changing, and we love that about you! Did American Idol open you up to any new styles that you found fun, that you think you’ll keep incorporating into your future looks?

I’ve always been the type of person to change my style (hair, clothes, etc.) After High School, I decided that I wanted to only dress “like a boy,” so I shaved my head and for a very long time. I stopped wearing anything that was considered “girly” to me.

When I was baptized, God showed me myself in a dress with long hair and on a stage in front of a large crowd. God told me that was how I was going to receive the most blessings, so I slowly eased my way back into dressing like a female. I’m not comfortable enough to have make up on everyday, and I’m not ready to wear dresses and skirts all the time either. But I’ve been trying hard to be comfortable with myself no matter what I look like or what I’m wearing, with or without make up.

If you could collab with one artist for a song on your future album, who would it be and why?

I would love to collab with Arlissa because I feel every word when she sings, and that’s the feeling I want to give to people as well. After performing with Lauren Daigle, I would also like the opportunity to collab with her because I feel like our voices would blend beautifully together when harmonizing. I really love a good harmony.

Touring isn’t happening for a little bit, but what would a “Just Sam Tour” look or feel like? (Example: Would it be a simple tour with a mic and the stage, or heavily decorated with some sort of theme?)

A “Just Sam Tour” would definitely look weird… Weird because I’m different and I feel like some days there will only be a mic and stage, and other days I may want to add a few things to spice it up. But really a “Just Sam Tour” is not going to be about themes. There’s always going to be a message that I hope will inspire people. My tour would be diverse for sure.

We noticed your Instagram bio also says you’re an actress! What type of movies/shows do you see yourself being in?

Growing up, I really enjoyed watching movies/tv shows that I could relate to. I feel like if I had the opportunity to be in a movie or tv show, I would probably aim to be in something that is oriented to my personal life experiences.

Would you ever want to be part of a Broadway musical? If so, do you have a favorite musical in mind?

I’ve always thought about being apart of Broadway, I just never knew how to make that happen for myself. I love The Lion King on Broadway, The Color Purple, and Hamilton, but I would love to be apart of anything on Broadway.

We’re sure you’ve been getting tons of beautiful messages from fans. What are some of the most rewarding things a fan has told you when it came to your music?

I have a “Just Sam Support Group” on Facebook which now has over 30,000 people on there. Tthey’re always leaving motivational messages for me and supporting me in any way that they can. One of the most rewarding things that has happened was a young dancer from Africa, her name is Angelina. She danced to my version of “Rise Up” and dedicated it to my grandmother. It meant so much to me that she would take the time to do that.

If you could give one piece of advice to someone who wants to audition to be the next American Idol, what advice would you give them?

You have to be able to remind yourself to stay true to you. No matter who’s around or what you hear. When I got to my audition I didn’t expect to go far, but I knew that I had to be myself, and I was. So that took me to the next round in Hollywood. When I was in Hollywood, I started to think I should add riffs and runs to keep up with the people that were around me, even though that’s never been my way of singing.

You can listen to Just Sam’s debut song, “Rise Up,” available now wherever you stream music.

Watch Just Sam’s rendition of “Rise Up” from the American Idol finale:

Do you love her version of “Rise Up’? Let us know your thoughts on our Twitter and/or Facebook!