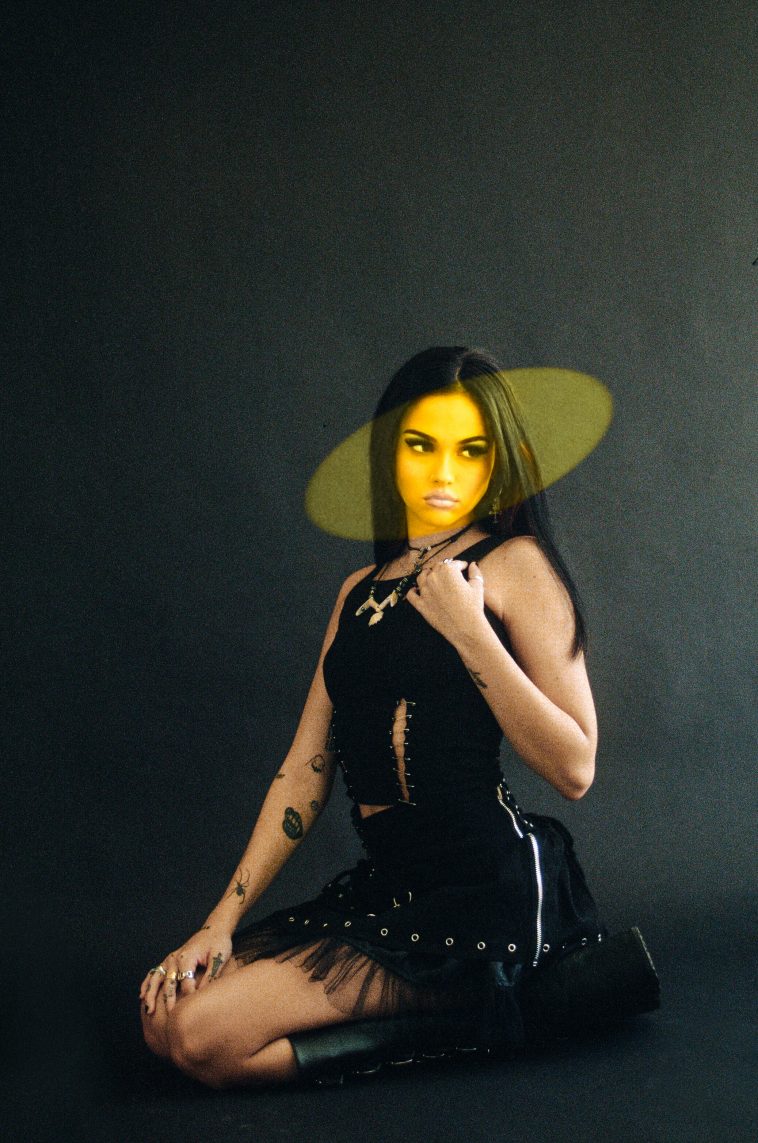 Since releasing ‘Knife Under My Pillow‘; her first single of 2020 at the end of August, singer-songwriter Maggie Lindemann has wasted no time in providing fans with a selection of new material. Today marks the release day for her latest single ‘Scissorhands’ which is taken from her forthcoming debut EP Paranoia set for release on 22nd January 2021.

We had a chat to Maggie Lindemann about the new sounds which have been highlighted through the singles which are a leap away from the pop sounds of tracks such ‘Pretty Girl’ as she finds her musical identity and find out more about what fans can expect from her long-awaited debut EP.

Hi Maggie, how are you given everything going on in the world right now?
I’m doing good! The best I can be during these weird times haha.

You’ve recently announced your debut EP Paranoia is set for release in January, it feels like a long time coming and we really cannot wait to hear it based on what we’ve heard so far. What can fans expect from the release?
Well the whole EP is definitely more alt/rock/pop/punk and definitely less pop. Also, I wrote this EP during one of the happiest years of my life, so expect some of that too! A lot of cool content will be coming too!

What was the recording process like for the EP? Do you have any standout memories you can share with us?
Recording this EP has been so fun. It’s my first actual project so there were many trials and tribulations haha. Honestly just the days where we were writing and would realize how fucking sick something was sounding. Like I remember mid-way through ‘Scissorhands’, we were just like ‘oh shit this is crazy’, then when Cody (Tarpley) sent us the song with all the production it was the craziest feeling.

You’ve released three tracks from your forthcoming EP so far, which of these do you feel is most indicative of the EP sound direction?
Ummm I mean all of them live in the same world for sure, but I’d probably say ‘Knife Under My Pillow’ is the closest.

Knife Under My Pillow gives listeners an insight into your experience with paranoia, despite how upbeat the track is it’s quite a personal look into something which impacts you significantly. It was the first track to be released from the EP and your first of 2020; how did you find the response to it from fans?
The response was really good! You never know what to expect when you release a song, especially when the new stuff you’re doing is so different. But I’m really excited and finally feel confident in my music, so it’s nice to see people being so positive about it!

GASLIGHT! is something your fans might not have seen coming, the raw scream vocals from Siiickbrain pack a punch. Was the track always intended to be a collaboration? If so, how did Siiickbrain get involved?
Yes, it was always gonna be a collaboration! Me and Caroline are really good friends in real life and she’s a really talented songwriter and artist, so we just decided one day to work on music together. There wasn’t any real lead up, just decided to do it one day and just fucked around for a few hours and got Gaslight out of it!

Latest single Scissorhands is a powerful, beat driven number and one we’ve interpreted as being about the inability to get close to others without hurting them. Can you tell readers more about the story behind the track?
The story is based off of Edward Scissorhands. I love that movie and always felt like he was super relatable to me, so decided to write about him haha. He’s so misunderstood and forced to conform to this basic world and then when he can’t, they shun him. I have felt so out of place for a really long time and felt like I can never get close to people.

What are your favourite lyrics from your forthcoming release?
Oh god I don’t even know there’s so many good lyrics. Probably just all the lyrics on ‘Different’ because that song lyrically is describing a really crazy time in my life.

You started putting out music when you were sixteen, what have you learnt about yourself during your time in the industry?
I’ve done so much growing in the past 6 years just as a human being and an artist. I feel like I’ve finally found myself and who I wanna be, what I want to stand for, what music I wanna make. When I first started, I was so lost and I didn’t know what I was doing at all.

Do you ever find it hard making yourself so open/exposed to the listeners through the lyrics you’ve written? Or is it easier for you to write about personal experiences or feelings you’ve felt?
I do sometimes. I have a bad tendency to overshare because my anxiety freaks out and will tell me to just keep talking, so in sessions that’s actually super helpful lol. But I do find it way easier and helpful to write about personal stuff.

Musically who inspires you and has this changed over time? Do you find it’s been reflected within your sound?
Ah so many people; Paramore, Avril Lavigne, Billie Eilish, BMTH, etc… I think it definitely changes all the time. Anyone can musically inspire me. If I am just listening to random music and a sick song comes on, it’ll inspire me.

What would be your dream tour line-up to be playing on?
Hmm, idk! I would’ve loved to have done Warped Tour. I wanna do so many festivals, that’s my dream for sure.

Aside from music, you’ve also been keeping busy with your SWIXXZ clothing line. Where did the idea to get into fashion come from and how do you come up with inspirations for the items?
I’ve always loved fashion, and everyone was always putting out merch with their faces on it and I just didn’t wanna do that. So SWIXXZ is sick because it’s stuff I actually wear and even if you don’t know who I am, you can still wear it. I do finally also have merch out tho haha but it’s so sick, I still wear it even though it’s my face.

You’ve teamed up with Travis Barker on Friends Go and achieved over a billion streams on one of your tracks (Pretty Girl). But they’re just two of your musical achievements but what’s still on your ‘bucket list’ to achieve musically?
I just want my music to be heard and people to feel a genuine connection to it. I want to go on tours and meet people and be able to perform all over the world.

Obviously, you’ve got the Paranoia EP release in the not too distant future, but what else is on the cards? Will there be any events in the lead up to the release for fans to get involved with?
There will be a lot of virtual stuff since we unfortunately are still in a pandemic! But once it’s over I can’t wait to get out and see everyone again!!

Scissorhands by Maggie Lindemann is out now. You can stream/download it from here. The Paranoia EP is released on 22nd January 2021 through Caroline Records and Swixxzaudio, pre-order it from here.

Which of Maggie Lindemann’s recent tracks are your favourite? Tweet us @CelebMix and let us know!