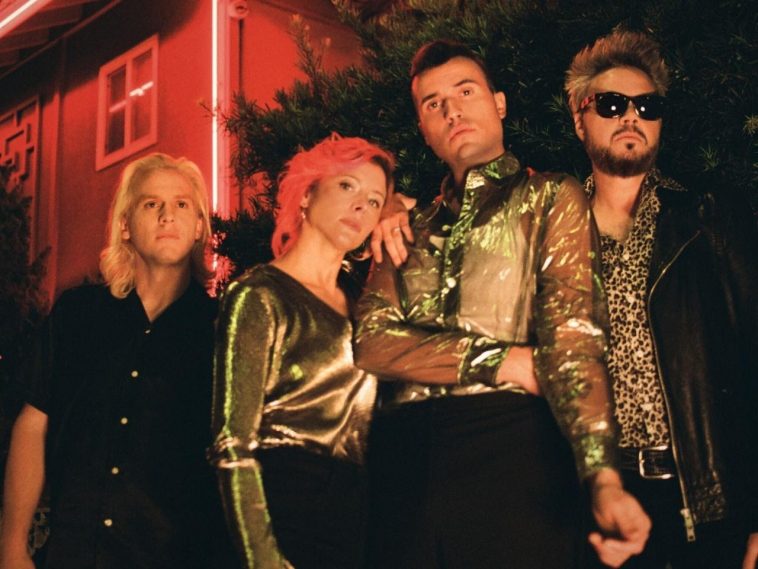 After a five-year hiatus, Neon Trees are back with new music. Their brand new single, ‘Used To Like,’ has already topped the charts and preludes their highly anticipated fourth-album. This will be their newest full-length project since Pop Psychology which released back in 2014. The single also marks the start of a new era for the popular group as well as their return to the music industry.

In an exclusive interview with CelebMix, lead vocalist Tyler Glenn opened up about the group’s fans, goals for this year and more.

What can you tell us about your recent single “Used To Like” and its message?

Tyler Glenn: It’s a last ditch effort anthem…let’s do everything we can to get it back to the best even though we know it’s impossible. In this case, it’s a relationship but I think it could be applied to any scenario. I like that there’s desperation in it as much as I like how self aware I sound in it. I think too often love songs and break-up songs are masking the truth, in “Used To Like” there’s very much a self-awareness to it all. I could be holier or better, we could see each other better but we’re just trying to shift blame. We could try to go to all the extremes to get back to what we liked about each other in the first place, but in the end it’s not realistic.

That’s your first single out in five years! How does it feel to be back and creating new music for your fans?

TG: We never stopped. I definitely never stopped either. I think it more came down to the infrastructure surrounding the band that felt shaky and something we needed to take a pause, beat on and assess. I wish it were as simple as writing a song and putting it up, but there’s an industry component to the music industry that alps of people forget about or simply aren’t privy to. That aside, I think all things happen in the time they are supposed to perhaps not in an autopilot sort of way, but in a way of these songs feel as immediate and authentic as they could and that to me is the best time to put something out. So perhaps I had to learn patience, have more faith etc. but in the end it’s all working out how we wanted it to, and I’m so pleased the fans are still around to listen and go to shows. That’s the real gem of this whole thing.

Is there anything you would want to say to the dedicated supporters who have stuck with you from the beginning and are still here?

Yeah like I was saying, that’s the real gem or gift of this whole thing. They kept asking and asking, on the verge of bugging us for new music “When’s the album?”, “When’s the next song?” “When’s the tour?” that stuff can seem like a pest in the moment, or add pressure, but in fact, it’s incredible and exciting to have fans that are rooting and waiting for more. There’s so many people saying so much these days, so to have a fanbase choosing you as an artist or a band they want to hear more from, that’s something you can’t buy or make up out of thin air. You really have to foster and cultivate that. We’re very excited to be feeding the fans again, and as we accrue more, or more loyal fans, that’s only a bonus.

Since this is officially a new era for Neon Trees, what can fans expect to hear or see from you this year?

The new album is coming this year, and we are trickling out songs and visuals and shows in support of it throughout this year. But to us, this is a point in our career where we don’t see ourselves taking a break again for a while. I guess what I mean is, as much as were putting the finishing touches on this one, there’s already thoughts for album 5 and 6, tours and goals for our band even a couple years into the future. You can’t plan these kind of things fully, but you can have intent and then be prepared to accomplish those set out intentions and goals and that is something were all very much up for.

Will the overall sound of the new music be similar to smash singles “Animal” and “Everybody Talks,” or will listeners experience an evolution of Neon Trees sonically and as a whole?

I think our records have a through line in them, mostly my vocal and approach to melody and song craft, but the icing is always the band playing together and finishing those songs out. So in that way there’s a familiarity, but even those big songs of ours don’t sound the same if you really a/b them. I think the commonality is the energy in them and that I can safely say is saturated in these new songs. There’s also a lot of exciting production elements and flexes we’ve explored even more on these new songs which is always fun and exciting to implement into the catalog and live show.

What are your goals for this year as a group?

The new album! The festivals and big radio shows we have on the calendar! The visuals and aesthetic were doing in this era, it’s all really fun for us an exciting to be back publicly doing it. I’d say beyond those things, the biggest goal is feeding the fanbase and if we have to, reminding them “what they used to like about us.”

If you could tease anything about what fans can expect coming soon, what would you share or tell them?

I’m tired of teasing, and I know damn well they are too. The new album is this year, shows and touring around it, and plenty of new music and tours beyond that! That’s less of a tease and more of a promise.

What’s your favorite song by Neon Trees? Tweet us using @CelebMix and let us know!