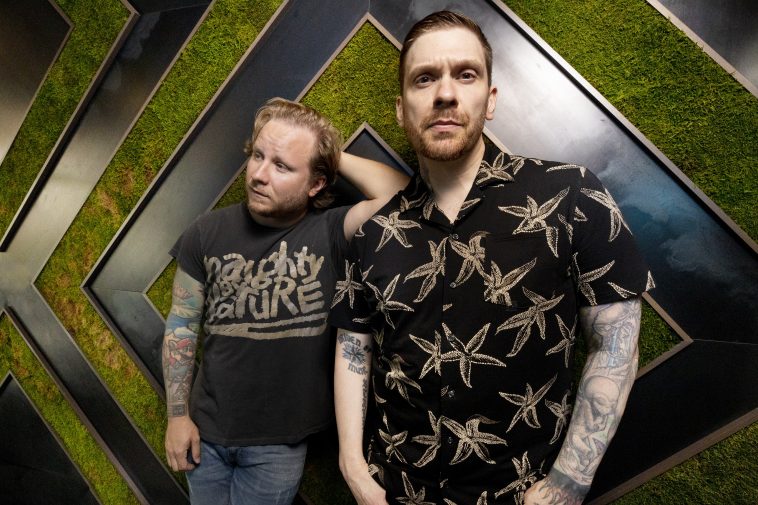 Brent Smith and Zach Myers of multiplatinum band Shinedown have joined forces as a powerful duo known as Smith & Myers. Their brand new single, “Not Mad Enough,” follows recent acts of racial and systemic injustice specifically in regards to George Floyd’s death. This single showcases a new sound and version of the duo compared to what listeners may expect if they are familiar with Shinedown’s sound. On the upcoming Smith & Myer’s album, the group recreates five covers of well-known yet unexpected tracks, such as “Better Now” by Post Malone, as well as five original tracks. Topics such as immigration, social media and society are explored and portrayed through vulnerable lyrics and intricate instrumentals. In an exclusive interview with CelebMix, Brent Smith and Zach Myers open up about releasing new music together, fans and more.

What can you tell us about “Not Mad Enough” and the inspiration behind that track?

Brent: “Not Mad Enough” was written about George Floyd. During the process of making the Smith & Myers record, there was a moment in the studio where we were finishing out some of the tracks on one of the songs and I called it early that night. I went back to my hotel room and although I never turn the television on when I am in hotels, I did this night. And the moment I did, I was witnessing what the rest of the nation and world was watching at that moment in time, which was the murder of George Floyd in high definition. “Not Mad Enough” wrote itself and I just remember it being a flood of what it needed to be. I was devastated for his family, for the world in general and the reality is that we have got to figure out a way to be problem solvers and be unified together – to be a part of the solution and not part of the problem. I would give anything for George Floyd to still be alive and that he could be with his family and that this did not happen, but the truth of the matter is that it did, so how do we honor his memory?

We honor it by working with each other and talking to each other. We should be mad about a lot that’s going on in the world right now. That’s one of the reasons the title of the song is “Not Mad Enough.” But it is meant as an offering of humanity and an understanding what happened so that we can do everything in our power to never have something like this happen again to any human being. I was raised by two parents that taught me to love everyone from everywhere equally. It didn’t matter race, religion, whether you’re younger, whether you’re older, your background. Everybody is equal and I still believe in that and hold it true.

Zach: We’re guys who follow politics, but we’re not political artists. We don’t really talk about politics in our songs and I still don’t think we talked about politics with this song. I think it’s a right and wrong thing. I don’t think it’s a left or right thing. In 2020, you shouldn’t have to watch a man die on YouTube, at the hands of people who are paid to protect him. It’s not saying that we don’t support police, we do. It’s just that we don’t support bad police. I don’t think anyone should. These things happen, but how many of them are not getting filmed? So that’s the inspiration behind why we wrote the song. We’re just saying that sometimes it feels like people aren’t getting upset about the right things.

How important is it to use your platform to speak about largely important issues and to help inspire change?

Brent: I’ve often told people that I write songs for a living because it’s cheaper than therapy. The funny thing is that from a very young age, I’ve always been able to put down on paper my thoughts and for some reason I’ve just always done it in a melody. I’ve never had a problem saying what was on my mind and our audience has given us a platform to be ourselves and we want them to be themselves too. I think more than anything our audience understands that we don’t pull these songs out of thin air. Either we have gone through it, or it’s a person we’ve met, a place we visited, a scenario we’ve been in, a subject matter that we’re dealing with. Everything has to be built off of the integrity of the creativity. When it comes to Smith & Myers or Shinedown, it’s all about the honesty. It’s all about putting forward the realism of whatever that subject matter is and I think our audience understands that we take that very seriously. We’re very lyrical and they know that we’re gonna be honest with them and that’s why it’s important.

Zach: I don’t think you can watch the world change to the degree that it has changed in the last eight months and not speak on it. If you just go, here’s a song about partying… I think people are eventually going to see through your BS. I have kids, so I want them to grow up in a world that’s tolerable towards other people and how people feel, so for me I think it’s important to speak out on these things. It’s something that we have to do and it’s important that when these things come to light, you share how you feel about them.

How does this single differ from what you both created and released with Shinedown in the past?

Zach: Smith & Myers is just me and Brent. Everything we’d ever done in the past with Smith & Myers were cover songs, so this is the first original music we’ve written. And it’s just different in the sense that we’ve never written a song like this before, whether it be talking about the social issues that we’re talking about or just the content of what it is. It’s really just a guitar and vocals. It’s the first single that we’ve ever released as Smith & Myers, so it differs in a million ways from anything we’ve done with Shinedown. It was just Brent and I and our friend and producer Dave Bassett in the studio making this record, so it was just a completely different vibe and hopefully people can feel that when they listen.

You have an upcoming album that is set to be released in the fall. What can you share about that?

Brent: That it’s going to be awesome and get ready because I think it’s hopefully going to really inspire and it’s probably going to shock people. We poured our hearts and soul into this music along with having an extraordinary friend and producer, Dave Bassett, who has been a huge part of Shinedown since 2007, but also we decided we wanted him to be a part of the production side of things and engineering and the mixing of everything. I think people should get ready to go on a different ride, if you know what I mean. I think people are going to dig it.

There will be covers on the album! How did you decide which artists or bands you wanted to cover?

Brent: We had the fans give us their picks of the songs that they would like us to cover and then we narrowed them down. We wanted to take these songs and do it with a different approach and make them our own. We also tried to really focus on songs that were really lyrically awesome, but maybe the way that the original artist presented it, the audience didn’t necessarily dig into that part of it so we really wanted to focus on the story of these classic songs and make them sound different. The song is still there, we’re just doing it in a different way.

Zach: We combed through and picked the ones that we wanted to do. I told Brent at the beginning that what I wanted to do with them was to reimagine what the song was. You can just go in and cover something to the T, but I don’t think it’s gonna do anything special. Usually the original artist is probably the best version of it, so we thought about it like what if we were a duo and we wrote these songs? How would we play them? And that’s where the covers came from. It was awesome to have the fans pick them.

For fans who may have just discovered your music, what would you like them to know about you?

Brent: I would like them to know that there are no rules and it’s all about having fun, but it’s also about being thought-provoking. We try to build out these really interesting soundscapes with Smith & Myers that are different than Shinedown, but ultimately, if you’re new to Smith & Myers, I honestly think that you’re going to dig it. It’s definitely its own journey so I would ask people to come along for the ride.

Zach: For people who haven’t heard of Smith & Myers, I want them to know that we’re a live duo. This is the first time we’ve recorded songs that we wrote and made a record. I feel like it’s a live thing in the sense of, when you come see us live it’s mostly just a guitar and a vocal. The energy that comes from the crowd of a Smith & Myers show is truly amazing because it’s kind of the same energy of a Shinedown show, but it’s acoustic so when they’re singing to us they’re singing really loud. It is very energizing and fun. It’s a no-frills show and that creates a lot of space for a lot of moments to happen. I’m a big fan of that in the live setting.

Brent: We’re going to be doing a few shows this year – drive-in concerts – starting off in Philly on September 3rd, which is going to be super fun. We’re figuring it out right now, not only with Smith & Myers but also with Shinedown and the layout of the schedule. There are so many things that are going on in regards to Shinedown. We’re working on Shinedown 7 as well, but we’re very excited about the release of Smith & Myers. There’s probably going to only be a few shows this year that we will do and they will all be drive-in concerts, but get ready because there’s going to be a lot of stuff coming out. Then we move into next year and then we start really looking at how we’re going to begin touring again and just having to adopt a new normal which isn’t a bad thing and we’ll take it from there.