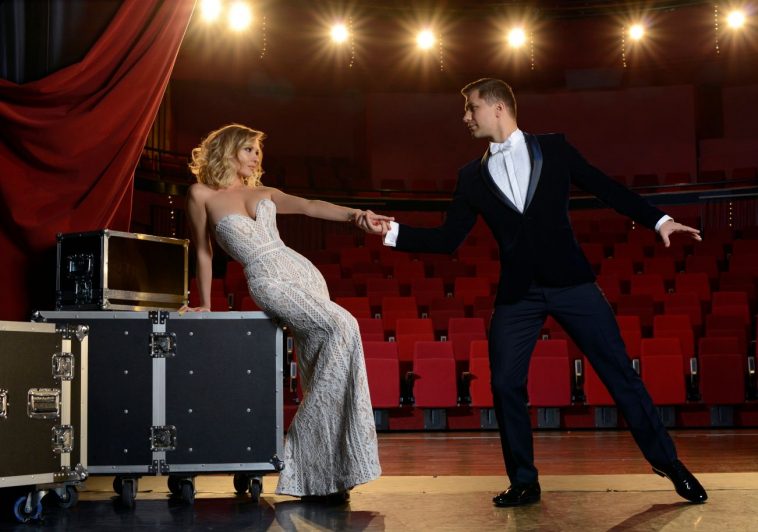 The streaming event was a huge success when it was first shown on world theatre day on 27th March 2021. Following the huge success, it will be streamed in the middle of May, continuing the amazing funding efforts.

Theatre is a massive part of culture around the world. We think it is amazing that Pasha and Anya have decided to use their influence to help raise money for an industry that plays a massive role in a lot of peoples lives.

We got to chat to Pasha and Anya and ask them all about ‘Rise up with Arts’ and their perspective on how covid has impacted their industry and more.

So, there has been a lot of uncertainty in industries like stage and theatre. How do you feel, it has impacted the industry you work in?

Pasha: Well, as you know that the whole industry was affected. People can not go to theatres, you have to be present for the theatres to be open. For the people who work in the industry to be paid. So lots of people who are part of theatre. Even most of the people you don’t see. People who usually don’t take stage, people who are behind the scenes. People who work with music, or lights, or costume. They are mostly affected because there is nothing happening and there is not enough support from the Government. I’m not saying the Government should support more, they are doing a lot. I mean it would be nice if they could support more. But instead of blaming someone we just decided to take the matter in our hands and try and raise some money for people who have been hit hard by the situation in the world.

Anya: Pasha and I, we have travelled for the past 5 years consecutively and we created shows accross the UK. It is our livelihood. It’s not what we do, it’s who we are. So when all the theatres shut down, we have been feeling quite low in our mental wellbeing and now physically because that is what we have been doing all our lives.

Do you feel that the performing Arts industry will recover quickly as soon as normal life can resume?

Pasha: I think that the Performing Arts industry will try to jump back at every opportunity to be active again. At the moment even full capacity at theatres is not permitted. So it will take some time for it to be normal again. Whilst obviously people are desperate to go to the theatre. They are desperate to be entertained. But at the same time there is the fear that it is not safe enough. Theatres have developed programmes and steps to take to make it completely safe for people to come back to theatres and watch. Whilst not at full capacity, it will take some time to get back to where it was and I don’t think it will recover as fast as we would like it to recover.

Anya: I mean we just have to define what ‘normal’ is. Every body is saying ‘The new Normal’. At this point we are very happy that a few shows are coming back on the West End and they are at 50% capacity theatres. So at this point in time I think, it just covers a lot of people to be able to get back to work. But I would say that it has been still very traumatic for the most artists. And actually not just artists, but people who work at theatres and accross the industry. So hopefully sooner than later. But I think it’s going in the right direction.

Pasha: Rise up with Arts is a Global variety show, that’s how we envision it. Global because we have involved people from all over the world and the opportunity for people from all over the world to even watch. But basically it started as a small project and became very very big. Especially with people like Brian May on board performing his new released single with Kerry Ellis it was a great, great, great support. We have amazing performers from all areas of industry. We have theatre, West End Theatre, broadway, people from TV, rising stars, Strictly Come Dancing Stars obviously. We of course have, as I mentioned Brian May. So we have lots of different genres presented in one show. So people at home don’t even have to leave to go to the theatre to watch the show and help people who work in the theatre and behind the scenes in theatre in the difficult situation.

Anya: ‘Rise up with Arts’ is the first worldwide variety show and Pasha and I created this show just to being attention back to the Arts. And actually March 27th which is the World theatre day. Which even most of the artists weren’t aware about. So it was very impactful days. We created the show to give the focus back to the artists and we too got some amazing names. They basically donated their time to raise money when it was March 27th with the theatres fund and actors fund. It was a very exciting first run and we are very excited to broadcast again in which the dates are May 14th through to May 16th.

What can we expect from the Rise up with Arts stream event?

Anya: ‘Rise up with Arts’is a very exciting show. There is a reason why Pasha and I wanted to created a variety show. Because we have got everything under one roof. We have got Strictly Come dancing champions, we’ve got Duncan James representing Chicago, we have got the West End Anna Jane Casey. Not to go too far, we have got the Brian May who has released his song March 27th called ‘Panic Attack, it’s gonna be alright’. So we’ve got everything, we’ve got the Royal Ballet, So You Think You Can Dance. If you love dancing, we’ve got it, if you love singing we’ve got it. If you love musical theatre, we’ve got everything. Now even if you missed it the first time you can watch it again. We are also going to stream never before seen footage that kind of we didn’t show before on March 27th. It’s gonna be incredible. So it’s definately going to be piled up with action.

What is your favourite thing about being involved this online charity event?

Pasha: There are a few things that I like because they all combine together. First of all we are loudly saying art is there and art keeps fighting back. And give the audience the chance to hear that message.

Anya: My favourite thing is that I had the courage to be able to follow through with this stream event. When I shared my thoughts with Pasha he was very excited. The most exciting thing that Pasha and I are still after 19 years are still able to work together even virtually for most of it. And put something wonderful with it to support the artists accross the globe.

On the theme of showbiz and theatre. With the difficult times through covid there has been a lot of uncertainty for industries like theatre. What advice would you give to people who aspire to be on stage in the future. Whether it is through dance or theatre?

Pasha: I have to be honest, anything with Performing Arts. Whichever direction you choose, is a hard job and hard work. You have to be absolutley dedicated to your craft. You have to have thick skin because there is a lot of, especially in the theatre world, there is a lot of competition. So you have to be ready to get those ‘Nos’ sometimes. And it shouldn’t discourage you from going forwards. What I always say to any young dancers or people involved in Performing Arts is the one thing you have that noone can take away from you is your skill. Keep working on your skill and improving it and that will eventually open doors for you.

Anya: I think it gave us time whether it was a forced break. I mean it was a forced break for us all. I think just keep creating. Keep finding your voice. Creativity really never stops. I know it’s been overused but I would say stay confident, be true to who you are because once the doors will open again and auditions are gonna be in full force. Hopefully as an artist we can walk in more confident than before because we had this time to find our voice and our element basically.

Thankyou for speaking to us today

Pasha: My pleasure, thankyou very much.

Anya: thankyou so much. Appreciated.

The Rise Up With Arts Exclusive Bonus Stream is available 14th – 16th May. Buy tickets at www.riseupwitharts.com