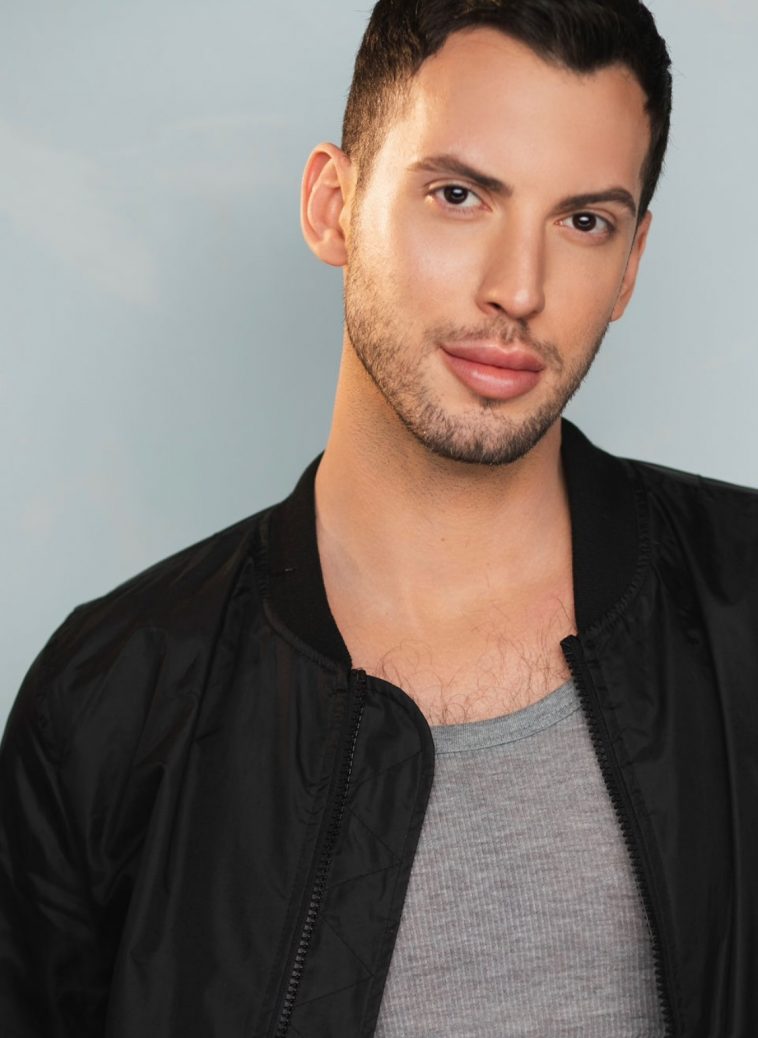 One of this Spring’s hottest films was Natalie Morales’ ‘Plan B,’ which garnered consumers attention throughout the world.

‘Plan B’ tells the raunchy story of two high-school-aged girlfriends who take an overnight road-trip in efforts to seek out an emergency solution to an accidental pregnancy within South Dakota’s conservatively anti-choice jurisdiction.

Directed by Natalie Morales, Plan B is the director’s second breakout film, Morales’ first film, “Language Lessons,” was a Berlin Film Festival and SXSW Film Festival selection that will be released later this year, which chronicles the friendship of a Spanish instructor (Morales) and her student (Mark Duplass) as they bond during online classes; a testament to the lifestyle we were all forced into as a result of the COVID-19 pandemic.

Like Morales, MacKay also has something to celebrate, as the new Hulu film is a major milestone for the makeup artist, who served as the film’s Makeup Department Head.

In MacKay’s first time holding such a role, he attributes this film as one of his proudest moments to date, thanking Plan B’s director Natalie Morales. “She hired me as the makeup department head, and it was my first time having this role,” he told Digital Journal prior to the film’s release.

“After not working for months of quarantine, I think it was the perfect project to excite me and truly challenge me.”

So how did MacKay’s first big breakout opportunity come to be? CelebMix sat down with MacKay for an exclusive interview about his experience refining each and every look for the characters in the new Hulu film.

“It was probably a week into September of 2020; I hadn’t worked in 6 months since the world shut down in March 2020, and by now my parents were asking if I should consider a different profession as there were no upcoming opportunities getting makeup-related work in sight.

I happened to see a press article one day saying actress Natalie Morales would be making her directorial debut on a new Hulu movie. I had done her makeup in 2019 a few times for press days, so I wanted to be friendly and DM’ed her on Instagram congratulating her.

She was happy I reached out, saying the film needed a Makeup Department head and she wanted me to have the job! I assured her I am not currently a union-contracted makeup artist, and I had only been department head on independent films, music videos, and commercials; never a union feature. It honestly couldn’t have been a more perfect fit for my first major feature film. Natalie gave me a chance and believed in my work/ability and I am forever grateful.”

While COVID-19 restrictions have loosened significantly in the past month, industry figures including MacKay had to still address the challenges of filming during the pandemic.

“Working on Plan B was the most challenging job I have had to date, but also the most rewarding,” he explained. “We filmed during the pandemic, during a time when not many productions had gotten back to work. We all had to learn how to work efficiently wearing masks/shields while social distancing as much as possible. It was a new position I’d never had before working with a production team that was already very close, and I wanted to do my best to make a good impression of my personality and my work abilities.”

Plan B’s production company, American High, was the perfect team, according to MacKay for his first movie. “I felt at home quickly, and made some amazing friends in the process.”

It’s More Than Just a Title…

However, being a Department Head, according to MacKay, is much more than “just being good at your craft.”

“…whether it’s makeup, hair, set design, etc. You also have to have great management skills because you are in charge of the people on your team’s responsibilities, making sure they get paid, and taking the blame if something goes wrong regarding your department.”

MacKay revealed that as confident as he was in his abilities as a makeup artist, he had to look back to his earlier days in the industry. “I had to revisit a lot of the skills I learned working for MAC Cosmetics back in 2015 when I joined the management team,” he said. “I’m grateful for this experience, as it really helped me keep the business aspect of the job in the forefront.”

Game On! Everything’s On the Table

While this was MacKay’s first time working as a Makeup Department Head, he also had some tough decisions to make when it came to analyzing the script and executing his professional decisions on refining the character’s looks.

“What made it particularly difficult was that I had never even had the chance to work under another department head to learn the daily protocols, verbiage, and expectations of an experienced unionized production team; I had to ask a lot of questions daily, and not take it personal when a crew member was frustrated.”

MacKay said that when he got hired in mid-September and was told that he had to be in Syracuse to begin production in less than two weeks, he had quite the tasks ahead.

“Within that short period I had to read the script a few times and make notes about character’s looks/makeup changes based on what I imagined; ask the director, Natalie what her visions for the looks were; order all the products/set bags/individual brushes for the cast; and try to be mindful of the budget I was given.”

But what other challenges did MacKay have to overcome?

I had high anxiety trying to guess the best products to order for these characters because I didn’t want to waste any of the limited budget ordering things we wouldn’t use.

I also had to think of new ways to refine the looks I had in mind for the characters with the help of Morales approving my ideas. I had been used to creating makeup-focused looks for editorials, music videos, and press days, but I needed to now create looks that wouldn’t pull the audience’s focus away from the film’s narrative or be too distracting.

Having these challenges is what made it so rewarding. Before quarantine I was getting too comfortable with my day-to-day bookings and jobs I was familiar with, so I am grateful that after months of having no work I was rewarded with a project that kept me on my toes the entire time.

Plan B’s theme and message played very well into MacKay’s resume of experience, with him bringing his best work yet. Prior to the film, MacKay appeared on Dick Clark’s Rockin’ Eve for NYE 2020, for the third year in a row, doing hair and makeup for his client, Jonathan Bennett.

“Normally, I love a glamorous style of makeup,” he said. “I love seductive eye-makeup looks, glowing flawless skin, and creating attention-grabbing looks. For this film, however, I couldn’t make the characters too perfect, because they had to be real people set in South Dakota. I wanted to incorporate pops of fun whenever possible when appropriate for the character. The closest I got to creating a “glam” look was on the character of Megan, who plays the popular mean girl at Sunny & Lupe’s high school. I used Ariana Grande as my inspiration for her makeup style, and during the party scene I covered her body in a metallic silver-blue glitter and it was gorgeous!”

For those who haven’t had a chance to watch Plan B on Hulu, MacKay has some tips on what to look out for, when it comes to his work.

The character of Lupe, one of the film’s lead roles, had such a fun makeup journey in this film. It starts off with her going to school as a modern day “goth” rebel, and instead of the classic “goth” look of pale skin, dark smoldering eyes, and matching dark lip, we kept it minimal and went with a simple black lip as a statement.

We next saw her at a party, so again we wanted something punk-related, but not cliche. I gave Lupe a bright yellow winged liner with metallic stars next to each eye, and a stone-colored lip to break away from the classic black lip we had already seen.

Her final and main look of the film is a simple black wing, subtle stone lip, and 2 neon pink lines jetting out from the outer corner of her eyes to give a rock-and-roll, non-traditional look.

Another fun makeup-related scene is during the other lead character, Sunny’s, party.

In the scene she decides to borrow her mom’s makeup and quickly do it herself in hopes of looking more mature/sexy. I decided the look couldn’t be too perfect or age-appropriate, as Sunny’s character is a shy, overprotected girl who doesn’t normally wear makeup.

I used a forest green color on the eye, smudged black eyeliner, and a burgundy lip. Normally I wouldn’t do a dark eye/dark lip combo, but at that moment Sunny is frantically trying to change how she looks and is just putting on makeup to look older.

Tips for Rising Artists Looking for Their Big Break

For rising makeup artists in the industry who have not yet had an opportunity to work on a big film like this, MacKay shared some wisdom with CelebMix on what to expect.

“I know I still have plenty to learn about working on a film, but I can give some simple advice based on what I have learned, beginning with having your kit fully prepared.

“Think about everything you might need ahead of time, because the makeup trailer is often a distance from the set location and you do not want to keep the entire crew waiting for you to run back and forth.”

“Another thing to keep in mind is that everything on the face of a movie is makeup. If the script says a character falls in some mud, you better have fake mud in your kit to put on the actor’s face for close-ups. I had to learn this the hard way, ha!

“Lastly, you need to get a thick skin. Working on a film is fast paced and time really is money. Nobody has time to baby you or pat you on the back for doing your job correctly. You need to be present, do your job, and keep emotions out of it.”

“I often joke with people that I always keep the “Tim” in “optimism” and this movie is a perfect example to prove my point. After 6 months of not working and people asking me if I should switch careers/throw in the towel, it took everything in me not to listen to them.

I knew something amazing was coming. I have been a working makeup artist for 11 years and knew that I’d worked too hard/come too far to give up. Late August I decided to update my website and resume – ANYTHING to manifest work to come my way. Just a couple weeks later I booked my most exciting and rewarding job to date. I was assured that giving up isn’t an option for me.

Life gives you tests, and often makes you go through “Hell” to get to “Heaven”. If you work hard, don’t give up, and stay optimistic you will pass the test. Even if the winning result isn’t what you were initially expecting.”

For more on MacKay’s work, you can visit his website here. ‘Plan B’ is now available to stream on Hulu.