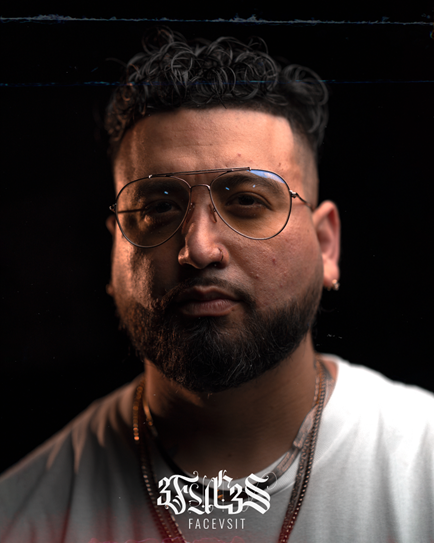 Rene Alvarado aka FACEvsIT, reigning out of Los Angeles California, is a solo artist partnered with Merchan Media Productions through his company MMUpClan. Growing up in the land conflict in South Los Angeles, in the neighborhood of West Adams, he learned from a very young age how to hustle hard and navigate with his head on a swivel at all times. From this, FACEvsIT, was able to find inspiration for his first solo album 3FAC3S.

Covering 9 tracks on the project, including the intro, the album covers all different facets of himself and a reflection of his life and what he went through. The name of the album comes from the Japanese proverb, “They say you have 3 faces. The first face you show to the world. The second face you show to your close friends and family. The third face, you never show any. It is the truest reflection of who you are.” The project is based on showing all the different levels of who he is. All 3 faces.

The one thing FACEvsIT hopes people take away from his music is the understanding of what it’s like to be a Latino living in Los Angeles. To try and understand the human experience from his point of view and to resonate with that. He credits his close friend Smurf who really showed him the depths of music and turned his poetry into a cohesive creation and navigated the music space.

FACEvsIT has been gaining traction as one of the hardest working individuals around. Everyone that works with him like EP The Dreamer and KT The Terrible, credits his work ethic and his drive to get better. His goal is to provide for his family and be able to live a life of freedom. He has been gaining steam from touring all over Europe and the United States, getting in front of thousands of people all across the world. He has rapped on Sway in the Morning and Shade45 and doesn’t plan on stopping there. His greatest achievement to date has been his most recent release of his solo project 3FAC3S.

FACEvsIT can just be described as a person that doesn’t take no for an answer, He believes in himself unlike anyone else and is always ready to put his money where his mouth is. He has seen and been through it all and believes nothing can stop him on his way to his goals.