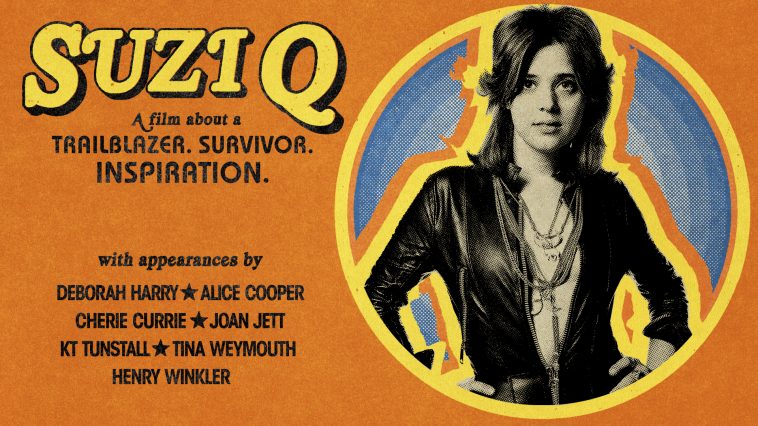 Released on 3 July 2020 (the day she turned 70 years old), the brand new film Suzi Q is an enlightening documentary which delves into the life of ’70s American rock singer-songwriter, Suzi Quatro. She made it big in the UK with number-one hit singles “Can The Can” and “Devil Gate Drive”, find out more about her story, how she became this massive international star, and what has happened since her hit tracks.

Directed by Liam Fermager and edited by Sara Edwards with Liam Fermager and Tait Brady acting as producers, this lights up the story of Suzi Quatro, where she came from and where she’s been. She has one incredible story to tell and every viewer that watches are in for a real treat as we hear how she focused on her career from a young age, to moving to London all by herself, to being confused for Joan Jett and vice versa, to where she is now – still in the studio writing and recording music.

She’s been in the music industry for 54 years – not many stars can say the same thing – having the hits “Can The Can”, “48 Crash”, “Daytona Demon”, “Devil Gate Drive”, “Too Big”, “The Wild One”, “If You Can’t Give Me Love”, “Stumblin’ In” with Chris Norman, and “She’s In Love With You”. It was certainly eye-opening hearing about her story where she started out in the group The Pleasure Seekers and Cradle before journeying out on her own and the difficulties she had with doing so as well as the problems it stirred in her family.

The film then talks about her career with various footage intercut throughout that really reveals the life of this ’70s rock singer. She also launched into TV where she guest-starred on Happy Days and then later turned to theatre where she appeared as Annie Oakley in Annie Get Your Gun and starred as Tallulah Bankhead in Tallulah Who?, and most-recently turned to radio hosting.

Watch The Trailer To The Film Suzi Q Here:

The new film Suzi Q which is a documentary about the life of ’70s rock star Suzi Quatro is out now on DVD and VOD, distributed by Utopia Distribution.

Have you seen Suzi Q? Let us know your thoughts on the film on Twitter @CelebMix.