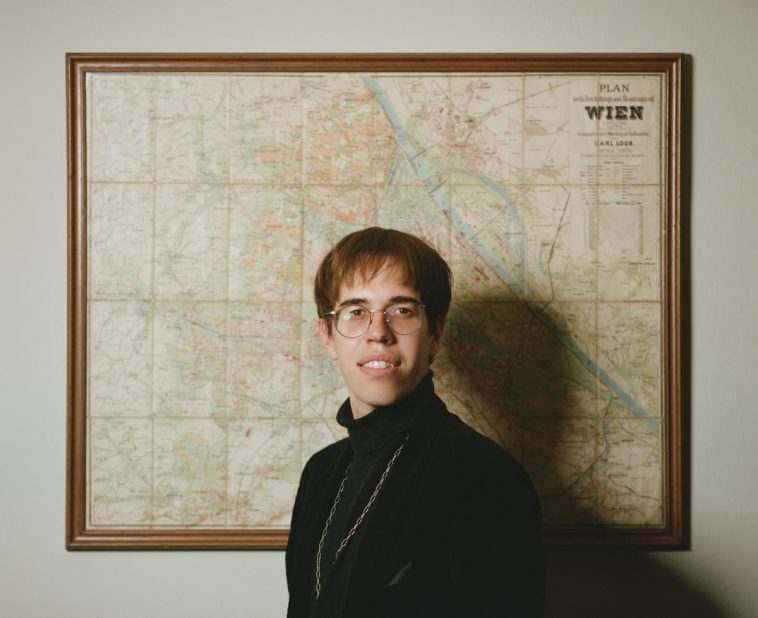 During these bleak and worrisome times, being surrounded by people who make you feel comfortable is a blessing. We are glad then that we picked up the phone to talk with filous, who was able to lift our spirits for the day ahead.

The Austrian multi-instrumentalist and renowned producer has made a name for himself by remixing tracks from some of the most celebrated names in music today such as Selena Gomez, Kodaline, and Mat Kearney. Recently, one of Filous’ childhood dreams came true when he released his new collaboration with indie-rock icons The Kooks titled ‘Hey Love’.

Hopefully, his words will provide you with that same warmth and comfort that we felt.

‘Hey Love’ is incredible. Who reached out to who?

The Kooks’ vocalist Luke Pritchard was in Berlin and looking for people to collaborate with on a new project. I am based in Vienna which isn’t too far from Berlin, and out of all of the artists that he was sent, he liked my song ‘Bicycle’ the most and so he wanted to work with me. It was quite funny actually because he reached out to my publisher who then called me on a Friday at 11 pm, which was very late for him to call, and he said, ‘can you be in Berlin tomorrow morning?’. It was quite a shock but of course, I jumped at the opportunity.

It was one of the most special moments for me to hear Luke in the headphones singing a song that we wrote together, and I still get goosebumps when I listen to it. It is very nostalgic and there are so many emotions that come to me when I hear his voice.

I guess it’s a totally different experience when you are actually recording with a childhood hero compared with just listening to their records.

Oh, yeah! It’s a totally different feeling. I remember when we first did the demo, I knew that the song had to stay true to The Kooks’ sound, but of course with my own twist. And so one of the ways that I thought I could achieve this was to put together a string orchestra, and so I got in touch with some musicians in Vienna and we made it happen. This was the first time that I had ever put a string orchestra together and so it was really special to me.

And what was your favourite part of the production process?

I think the best part is when you have a clear vision and it actually works out (laughs). I wrote so many versions of this song before I was happy with it. but I remember there being this moment where there was suddenly a clear path and everything seemed to make sense. It’s really special to me when you have a song that you can get lost in and lose track of time. With this song, I probably worked on it for about three months and so it was quite overwhelming when I realised just how much time I had spent on it.

It’s definitely a sign of a great song when you loose yourself within it.

Yeah, definitely. The great thing about this track was although I had never worked on a song this long before- I probably listened to it about 2,000 times- it is a song that I still enjoy listening to, and it’s probably the only track that I have ever released that I like to listen to myself. Normally I would never even consider listening to one of my songs at home. It’s just a really special song.

The majority of your tracks are collaborations with other artists, and so we are curious to know, what is the first thing that you do when you begin work on a new partnership?

I think the most important thing for me is getting to know the other artist first. I need to understand their tastes, where they are coming from, and what it is that they want to achieve. Without getting to know somebody first, I can’t even begin to start writing a song. I like the creative process to be very natural and then after that, I can conceptualize what we can do together.

It’s evident throughout all of your collaborations that you have built that initial bond. They almost tend to sound like you are childhood friends reuniting, which is pretty unique nowadays. A lot of today’s collaborations can often sound forced.

Wow! That means a lot. It’s really important for me that my collaborations sound natural because a lot of the time I have that same feeling when artists team up. Artist and producer collaborations can especially sound forced which I think is one of the most of putting things that you can have in your music.

A lot of music nowadays is rushed, and it can end up sounding unfinished and unnatural.

I think the thing for me is that in the past I have been forced into situations where things have been rushed and I knew that nothing good was ever going to come out of it. So for the last two years now, I have been adamant about only working on a song if I feel good about the person that I am working with. I know that if I do it any other way, then I won’t be happy with the result.

‘Bicycle’ and ‘Monday’ are the two tracks that influenced this next question… What do you think it is about the indie-rock sound that pairs it nicely with dance music?

I think there is something about combining natural indie elements with this punchy electronic character that is interesting to me. Perfecting this hybrid is something that I have been working on for a long time now, and I find something satisfying about having these beautiful indie textures paired with harsh, impactful electronic sounds.

So collaborations aside, you have also released your fair share of revered remixes. We wanted to know what your most challenging remix to date is?

Ah, good question. To be honest, I think most of the remixes I’ve done have been fairly easy. The most challenging thing that I have experienced is often the bureaucratic side of things The creative side has always been really clear to me and I only accept the remix opportunity if I like the artist who wrote the original song. Before I accept the offer to remix the track, I will usually already have in my head what I am going to do with it. The song is already there and so I can just really focus on my craft of producing, which is easier to do if the song is already good. My job as a producer is just to give the song a new world to live in.

Something that we notice a lot when we listen to your music is the unique sound that you have created. Since starting the filous project, did you always know what you wanted to sound like? Or is it something that has become more clear over the years?

I think it just developed really. My musical tastes have shaped it a lot, in particular the music that I grew up listening to in my parent’s house, but over time it has just been experiencing and practising different sounds. For a long time, I knew what I wanted to sound like but I had a hard time achieving it. But ever since Bicycle I’ve had a clear vision of how to go about it. That song was a big game-changer for me because it was the first track that I had released that I was completely happy with. Getting the right financial backing and resources has also been a huge game-changer for me because now that I have the things I need, everything is just a lot easier.

When you are talking about having the right resources, are you referring to the Villa La La studio that you set up in Vienna?

Yeah, exactly. Before I set up the studio, I was doing everything out of my bedroom, but since last year my life has become a whole lot easier with the opening of Villa La La.

And how did the studio go from being an idea to a reality?

When I first started I was writing a lot in Los Angeles, London, and Amsterdam in these incredible creative hubs, and when I got back to Vienna I was feeling isolated. There was no-one doing the same things as me and so my brother and a friend of ours decided to start up our studio complex.

So what is the music scene like in Austria?

One thing that I admire about the Austrian music scene is that it’s very experimental. Austrians tend to feel like they have to be original in whatever they do, and there is a level of narrow-mindedness that if you aren’t doing anything super experimental, then you aren’t cool. I think a lot of this stems from the fact that artists here aren’t meeting, they are stuck in their own homes, and as a result, they are isolated. If you are not connected to the music scene, how can it grow? So I think now that we have Villa La La, these things should start to change.

And with that being said, what is it that sets you a part from other producers?

I think I’ve been incredibly lucky in the sense that I got to work on an international level from the get-go. I’ve worked with some of the best writers in the world, and I have learned a lot from different cultures and music scenes.

You have definitely achieved a lot of success in a very short period of time. Have you had time to process everything?

This question is very personal to me because when it all happened I was still in school, and within a year, I was having to deal with managers, lawyers, agents, and business contracts. At that point, I didn’t realize just how crazy everything was and over the years I got pushed into doing a lot of things that I wasn’t comfortable with. It was quite a scary realization that I wasn’t in control, but after I realized what was happening, I started to gain that control back.

Could you tell us about your upcoming full-length?

I want to wait for the right moment to release this project, but it’s in the works, and I am excited about it. It’s almost like the closing of one chapter and the opening of another.

Thank you for chatting with us filous.

Thank you! This has probably been my favourite interview to date.

For the latest on filous: