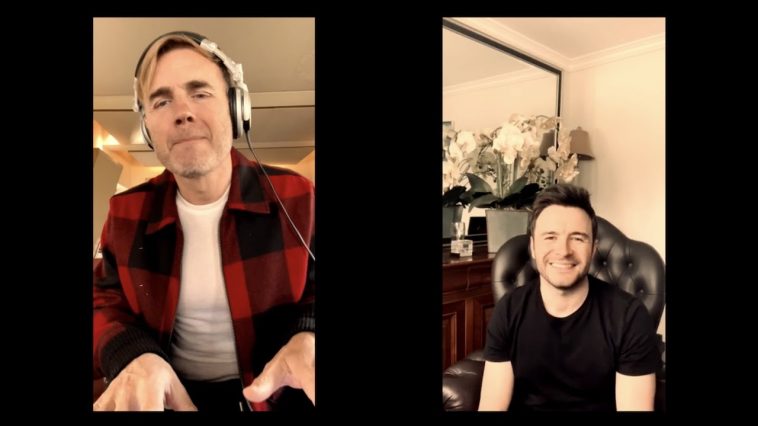 During the current COVID-19 lockdown, singer-songwriter extraordinaire and Take That frontman Gary Barlow has been busy entertaining the nation with his Crooner Sessions.

For the past few weeks, he’s been sharing videos which see him duet with various artists from the comfort of their respective homes. From boyband members to 80’s icons, powerhouse vocalists to music legends, Gary keeps delivering with the celebrity pals and fantastic duets.

Gary has promised that the Crooner Sessions will continue for as long as the UK is on lockdown, and so far has shared over 20 duets. Here at CelebMix, we’ve certainly been enjoying the daily dose of music so we’ve decided to share with you five of our favourite Crooner Sessions to date!

After sharing duets with many of his famous pals, fans had been highly anticipating the moment that Gary performed a duet with one of his bandmates. During session number 14, he finally delivered and unveiled an ‘Amazing’ duet with Howard Donald. Performing their III (Deluxe Edition) album track, the pair blew us away with spine-tingling harmonies and heartfelt emotion.

During the Crooner Sessions, Gary has delighted fans by duetting with numerous boyband members from over the years including Boyzone’s Ronan Keating and NSYNC’s JC Chasez. However, one of our favourite boyband duets features Westlife’s Shane Filan. Performing the classic Richard Marx song ‘Right Here Waiting’, Gary and Shane sound incredible together and fill our boyband fangirl hearts.

The Crooner Sessions have also featured a number of 80s icons including Rick Astley and Jason Donavon, however, one of our favourites was Tony Hadley’s appearance during session number 18. Singing the Queen classic ‘Somebody To Love’, not only does Tony deliver an incredibly passionate performance but he’s also joined by his dog as well as someone waving a Gary banner in the background!

As duets go, Gary teaming up with soul icon Beverley Knight was just sublime. Taking on the George Michael and Aretha Franklin song, the pair’s performance is absolutely everything. It features top class vocals, sublime harmonies and just radiates such a positive energy. It’s impossible to watch this without wanting to smile and bop along to the classic track.

Finally, our top spot goes to none other than Gary and newly reunited boyband JLS. Performing ‘Back For Good’, we can’t help but be impressed by how good the harmonies are considering that Gary, Marvin, Aston, JB and Oritsé are singing alone from their respective homes. The song choice is also perfect, considering that Gary and JLS have performed ‘Back For Good’ together in the past. The pièce de résistance however, is Gary changing up the final line of the song to say that ‘we’re glad that JLS are back for good’ – the feeling’s mutual GB!