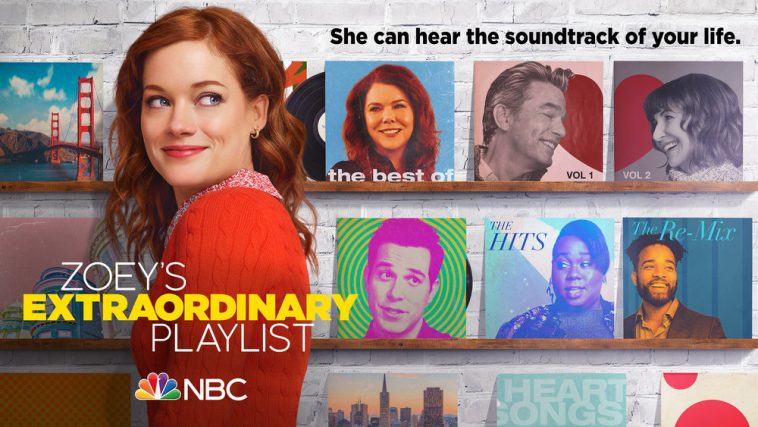 This week marks CelebMix’s five year anniversary so what better way to celebrate than to write about some of our favourite TV shows, this article is dedicated to Zoey’s Extraordinary Playlist and the best musical performances throughout season one.

The first season of Zoey’s Extraordinary Playlist ended just last week, here in the UK, and we’re already missing it, and we’re pretty sure that the US viewers are missing it too even though they were ahead by a few weeks with the last episode showing on May 3, 2020. We also have no idea if a season two will happen, but there are theories on where they’ll go next and because of how popular this show is, surely it will return. The series has been created by Austin Winsberg and stars Jane Levy, Skylar Astin, Alex Newell, John Clarence Stewart, Peter Gallagher, Mary Steenburgen, Lauren Graham, and many more.

(Note: Please proceed with caution if you have not seen the entirety of season one of Zoey’s Extraordinary Playlist as there may well be spoilers further down, especially when describing the musical performances in each particular scene.)

In the show, we follow Zoey (played by Jane Levy) who is a computer programmer for a company called SPRQPoint, we follow her day-to-day life until an MRI scan and an earthquake change her life forever. Now, she hears people’s innermost thoughts through theatrical musical performances, a full-on song and dance routine, and plenty of comic routines throughout. Zoey soon learns that she’s supposed to help these people out with their problems, which can either go really well or really badly.

If you haven’t seen the trailer, watch it here:

Choosing five of our favourite performances from season one is going to be really difficult, especially since a total of 69 performances are shown throughout the 12-episode season. After watching the whole series, we have to admit that although there are some that are significantly better than others, they’re all good in their own right and we found it tough to just choose five. Also, for the sake of spoilers, we have decided not to include the last performance of the series, which sees the whole cast sing “American Pie” by Don McLean, which is one epic performance with so much emotion and heart, and we so would’ve chosen it to be on this list if it didn’t contain spoilers. Here are our five favourite performances from Zoey’s Extraordinary Playlist.

The Cast Of Zoey’s Extraordinary Playlist Sing “Help!” Originally By The Beatles

So we’re starting off with one of the numbers in the first episode, and we chose this one because everyone around Zoey, in the street, just starts singing and dancing and she has no clue what is happening. It’s such an unforgettable scene throughout the entire series and it’s the moment when you realise what is happening and Zoey’s still a little confused but is slowly understanding too.

Now, we admit, we do love this song, but that is not all, this is a moment in Zoey’s Extraordinary Playlist when Zoey starts to realise how much Max (played by Skylar Astin) likes her and wants to date her. Thing is, Zoey only sees him as her best friend and so it becomes a tricky situation throughout the series. Skylar Astin’s voice sounds so good when he sings this song that we could so watch this again and again. What’s so incredible about this performance – and with many of the others throughout the series – is that everyone else has to act as if this isn’t happening at all, so you’ll see the other employees at SPRQPoint just continuing on, as if Skylar Astin isn’t there singing the Jonas Brothers’ song “Sucker“. We so want to see the outtakes to this show, surely this was not easy to do.

This is one of our favourites from the show, but it’s difficult not to reveal a spoiler. Jessica (played by India de Beaufort) has suspicions about her fiancé, Simon (played by John Clarence Stewart), and his friendship with Zoey, who he works with. We simply love this performance because India de Beaufort is not only stylish but she manages to pull off the choreography perfectly and we’re just in awe of this scene. What’s also important to note, is that because Zoey is the only one who sees this, she’s the only one who knows that Jessica has suspicions about her and Simon. Even the people who are performing these songs don’t even know they’re doing it.

Okay, we admit, story-wise there is a lot better performances than this one, but Mo (played by Alex Newell) and Eddie (played by Patrick Ortiz), reveal their feelings about each other right in front of Zoey and we just love how they put sexual attraction into this performance of Enrique Iglesias’ sexy song “Bailamos”. We also love how they’re doing a ballroom-like dance in the middle of a club’s dancefloor whilst everyone else is jumping up and down to house music. It also felt so empowering for so many people who were watching. We also have to say that their voices work well together, Alex Newell is a shining light throughout the series with his incredible vocals, and we always eagerly anticipate the next song he’ll sing, but as a duo they were brilliant and we so want them to duet more often!

Talk about one of the most iconic scenes in the entire season, Amber (played by Stephanie Styles) is the barista at the coffee shop that Zoey and her friends go to, and as Max and Zoey go to order, Amber starts to sing “You Give Love A Bad Name” by Bon Jovi, all because Max broke up with her. Not only is her voice on-point throughout, but she also throws coffee over him and because only Zoey is seeing this, it doesn’t really happen so we flit to a little cut-scene where Max asks Zoey what she’s laughing at, only Max doesn’t have coffee over him; it’s only when she returns to watching the performance, Max still has coffee on him. It’s truly unforgettable and so hilarious, you just have to watch this!

There were many incredible moments we wanted to include from season one of Zoey’s Extraordinary Playlist, especially the glitch episode – but we’ll going to keep all the other spoilers close to our chest. We cannot recommend this series enough, and we are hoping that a second season gets confirmed soon, as we need this back on our screens.

What are your favourite performances from season one of Zoey’s Extraordinary Playlist? Let us know on Twitter @CelebMix.