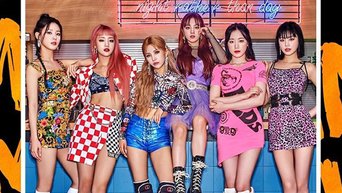 While this summer is a stark contrast to previous years, (G)-IDLE are here to brighten up our days with their infectious new single DUMDI DUMDI.

Written by SOYEON and co-produced with Pop Time, DUMDI DUMDI is a celebration of summertime and the excitement of youth. Filtered with bright tropical rhythms and moombahton beats, the summer banger is a different style for the girl group but matches them incredibly well, once again showcasing the variety of sides (G)-IDLE has.

The music video mirrors the idealistic summer scene of the six members having a blast. Intertwined with partying, a western cowboy aesthetic and a pool party, DUMDI DUMDI’s video is an explosion of joy.

The single release comes just 4 months since their 3rd mini album I TRUST, led by the title track OH MY GOD. The mini-album became their biggest first-week seller ever, pushing 112,075 copies and also became the girls’ first Number One album in South Korea.

DUMDI DUMDI by (G)-IDLE is available worldwide now on Spotify. You can watch the music video for the track below and don’t forget to tweet the CelebMix account to let us know what you think!