With every new year that we ring in, we learn of the new challenges that lay ahead of us. New years signal the start of new trials and tribulations, and new battles that are sent to test us. Some of these battles will make us while others will break us but if there is one thing that, “Closer,” singer Halsey is known for, it’s for being unbreakable. She is the true definition of what a warrior should be and once again she has proven exactly why this is with her most recent Instagram post.

The singer and songwriter has spoken out about her battle with Endometriosis on many previous occasions but her recent Instagram post could possibly be her most inspiring one yet. It seems that the singer is trying to start 2017 off in good health, by putting her best foot forward and finding the strength to undergo treatment for the condition which has plagued her life. You can read her full post here:

In the post, Halsey got real with her fans and announced that she had undergone multiple surgeries including one which would hopefully help to treat her Endometriosis. She wrote, “For those who have followed this battle of mine or who may suffer with it yourself, you know the extremes to which it can be mentally exhausting and physically painful…” and then she continued on about her recovery plan before ending with some words of advice for anyone else who might be fighting the same battle. She reminded her followers that even though she has suffered from the condition for years, she has still been able to live out her dreams and live a, “crazy, wild, rewarding,” life.

Her words spoke volumes and resonated with not only those who suffer from the same condition or one similar, but also with anyone else out there who is currently fighting a seemingly endless battle. If Halsey can accomplish all of the amazing things that she has in the last couple of years while still suffering from this chronic condition then you can too.

So what is Endometriosis?

Endometriosis is a condition where the tissue which is supposed to line the womb is found outside of it, and it can be found in several other areas of the body including in the ovaries and fallopian tubes or in the bladder. Although symptoms of the condition can vary significantly from person to person, the most common symptoms include pain in the lower abdomen, pelvis or back, pain during or after sex, painful periods, and a difficulty getting pregnant. While these symptoms are the most common for anyone who suffers from the condition, it is important to note that most people have no symptoms at all.

If you believe that you are suffering from Endometriosis then we suggest that you go and see your doctor or another healthcare provider as soon as possible so that they can try and identify the cause of your symptoms. And if you feel like you need any more advice or support about the condition or of one similar, then Endometriosis UK, Endometriosis She Trust (UK), or the Endometriosis Association are always available and will do their best to help you to cope.

Halsey has always been open and honest about her struggles with the condition, initially revealing it on her Twitter account in early 2016. She posted the following message on Twitter to her millions of followers: 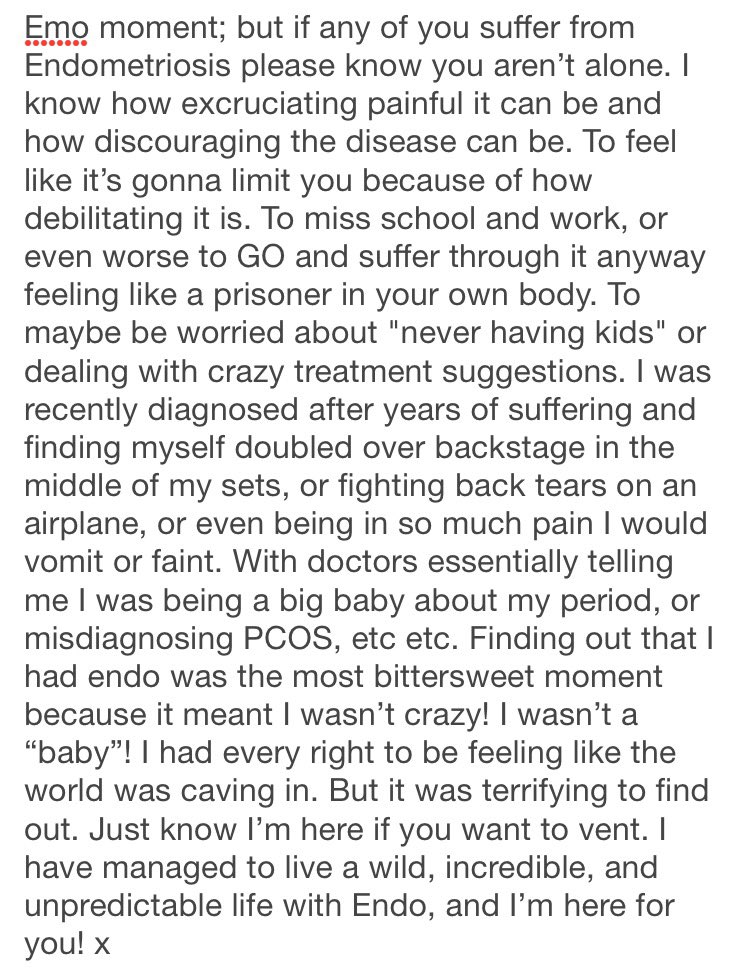 Following her tweet, Halsey was overwhelmed with responses from her followers. Fans and general supporters immediately began flooding her timeline with stories of similar battles, messages of hope and support, and gratitude for her honesty and strength.

Halsey’s followers have been a constant source of comfort throughout her battle and her recent post on Instagram only seemed to make that support system grow even stronger. Just like after her initial revelation about the condition on Twitter, her Instagram page became inundated with good thoughts, prayers, and overall messages of support. Everyone was and is behind her, including her friend Niall Horan who commented a simple, “get well soon Ash,” which we’re sure meant a lot to Halsey as she recovered in hospital.

We want to be one of the millions of people who are sending positive vibes to Halsey right now, and we want to wish her a super speedy recovery from her surgeries as well as thank her for her bravery and honesty during this trying time in her life. She truly is an inspiration to us all.

Have you been touched by Halsey’s story? Let us know on Twitter, at @CelebMix.

Hi! I am a 23 year old graduate who loved writing essays so much that I like to do it in my free time too. Some of my other hobbies include listening to music, trying out the latest make-up trends, and catching up on celebrity gossip. I am a small person with lots of big dreams and you can check me out on Twitter, @StrawberryZoe.