On June 3rd, 2016 the world lost a legend. Muhammad Ali had been known for an indomitable will and sheer passion for both boxing and life. While the late boxer spent most part of his life inside of the ring, the later part was a bit tough as the legendary boxer suffered from Parkinson’s disease. But he did not lose his witticism and kept on living his life on his own terms.

Once Ali was asked how we like people to remember him to which he replied,

“I would like to be remembered as a man who won the heavyweight title three times, who was humorous and who treated everyone right, as a man who never looked down on those who looked up to him…who stood up for his beliefs…who tried to unite all humankind through faith and love and if all that’s too much, then I guess I’d settle for being remembered only as a great boxer who became a leader and a champion of his people. And I wouldn’t even mind if folks forgot how pretty I was.”

When the heaven took away Muhammad Ali, the whole world became saddened with the news. People did not waste time and started sharing the most inspiring quotes by the boxer and also interesting stories like when Ali refused to fight in Vietnam War. Celebrities too took to their social media accounts to share their tributes to the late boxer. We’d like to share some of them with you:

The musician and a former Beatles’ member shared the band’s picture with Muhammad Ali when he met them in Miami in 1964. He also wrote a very heartfelt message along with the picture. 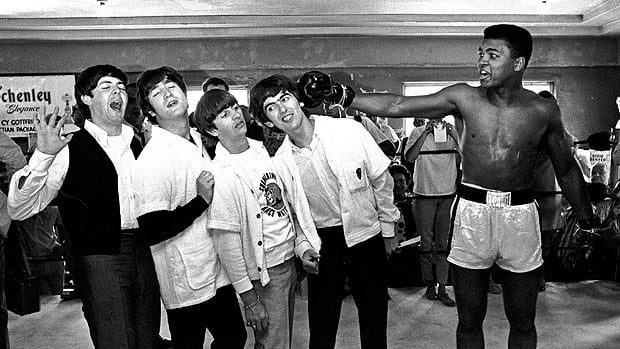 “I loved that man,” former Beatle Paul McCartney wrote on his website. “He was great from the first day we met him in Miami, and on the numerous occasions when I ran into him over the years. Besides being the greatest boxer, he was a beautiful, gentle man with a great sense of humor who would often pull a pack of cards out of his pocket, no matter how posh the occasion, and do a card trick for you.”

As Billboard reported, last year when the actor attended a SportsPerson of the Year award dinner, he talked about Muhammad Ali and said,

“But when we think about the legacy of Muhammad Ali, what he did in the ring is not what we think about,” said Smith. “For nearly two years, I worked to transform myself into the man who changed his name from Cassius Clay to Muhammad Ali and shook up the world. That’s really what makes my job so beautiful as an actor,” Smith continued. “For four or five months at a time, I get to wear people’s lives, so I got to wear Muhammad Ali’s greatness. I got to study and feel and embody the soul of the man. From the foundations of Islam and the strength of his Muslim faith and his life to the beautiful wake that he always leaves in his magnificent path.”

He took to Facebook to share a tribute. Smith shared two pictures of him and Ali which he captioned

You shook up the World!
My Mentor & My Friend.
You changed my Life.
Rest in Peace.

“You will always be my hero….#MuhammadAli”

You will always be my hero … #MuhammadAli pic.twitter.com/Rbp7Be3JAK

A legendary actor and a very well-known figure in India, Amitabh Bachchan took to Facebook to share a pic of him with Muhammad Ali. He also shared a small story as to how he first met the boxer.

“With Muhammed Ali at his home in Beverly Hills, Los Angeles, the USA late 70’s .. with Prakash Mehra and my brother .. Prakashji had wanted to make a film with him and me ..
The Greatest .. was and shall ever be .. a great athlete and a learned mind .. he fought in the ring and out of it too ..AND WON both !!”

The famous vocalist who used to be a member of the musical group The Supremes shared a video of herself with the boxer. The video consisted of the singer’s performance at Ali’s 50th birthday.

Me and Mohammed Ali

“The service you do for others is the rent you pay for your room here on earth”.

What do you think about the tributes celebrities gave to the legendary boxer? How do you remember Muhammad Ali? Tell us in the comments or  tweet  @CelebMix .