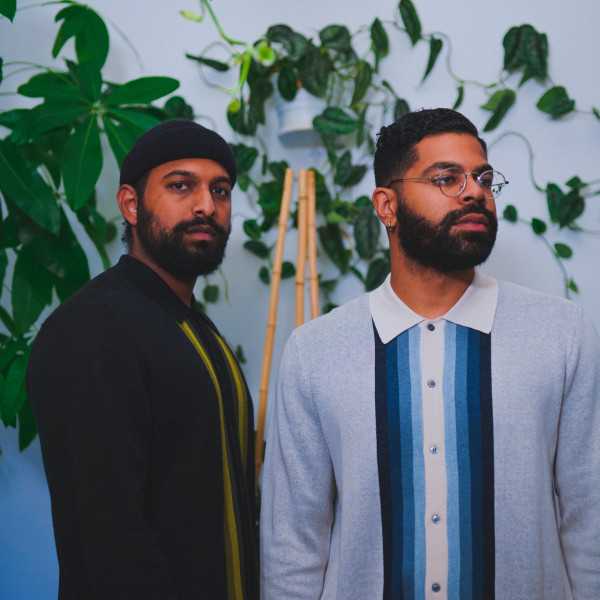 A concept album, b? narrates the lives of a group of people united by tragedy. Each song depicts the perspective of one of the characters, delving into the metaphysical concept of “BEING,” or ontology. The brilliant lyrics of the songs emphasize the contrast between BEING vs. DOING.

Made up of Michael Raj and Frantz Cesar, HOAX describes their sound as “empathy pop,” a blend of ‘60s pop, ‘70s Motown, and alternative R&B. A friend called it “the beautiful sound of sadness.”

Explaining “Beach House ii,” Michael Raj shares, “This past year for me – and I would only imagine for most of us – has been a year of introspection. Being stuck inside – even if you tried to ignore it in the beginning – probably led to every one of us having a reckoning with ourselves. To me, ‘Beach House ii’ is the aftermath of one of those reckonings. The older we get, the more critical we think of our past decisions and actions. So much so that some of us can live the rest of our lives consumed in regret. This song is my reminder to not keep any of those regrets and to realize that your short-term priorities will not be the moments you think about in the future, so don’t put them before or above the important things. If there is anything this past year of magical thinking has taught me, it’s that ‘Life changes fast; life changes in the instant’ (Joan Didion), but it’s important to hold on to the people and the things that you hold dear. Otherwise, you’ll end up a 20-something-year-old dripping with regret, writing a song like this.”

The lyrics of “Beach House ii” reflect the soul of the song: “Priorities change but people never do / And I would be a fool to think you’re worth it to lose.”

Opening on a fat, lusciously rolling bassline, “Beach House ii” flows into a burnished, sensuous R&B melody sprayed with tints of pop savors. Vaguely reminiscent of the velvety washes of Brook Benton’s “Rainy Night in Georgia,” only more sumptuous and honeyed, the tune drips with swanky textures and dazzling harmonies.

HOAX has it going on! “Beach House ii” rolls out cashmere layers of polished R&B crowned by grand, luxurious vocals.