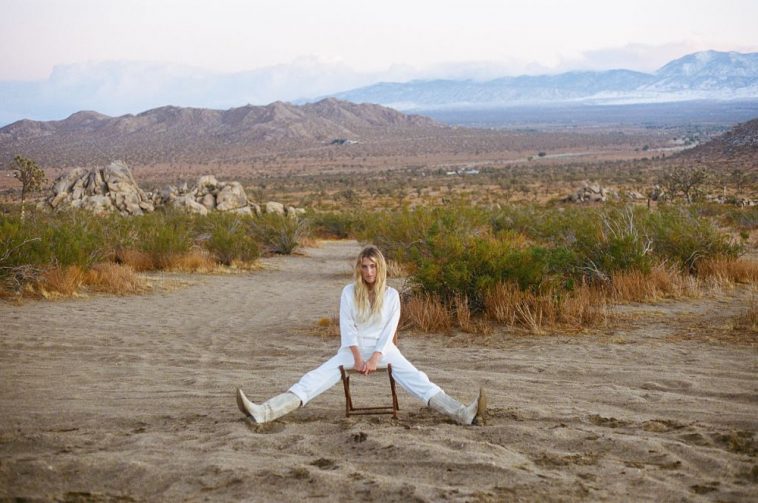 Evalyn is an indie-pop artist living in Topanga Canyon. Evalyn is actually her middle name, and it’s also her great-grandmother’s name. “She was one of the first female lawyers in Chicago and an absolute badass so it’s always felt right to bring her energy into my music,” Evalyn tells CelebMix at the top of our chat about her new EP.

“It feels so good to have music coming out and to see other artists I love releasing music,” Evalyn continues. “Right now, I live in the canyon, but am fully vaxed and looking forward to doing a bit of traveling around in a van with my boyfriend.”

I’m so excited to be able to put these songs out there. I wrote most of them while dealing with a pretty intense experience with an anxiety disorder and frequent panic attacks. — Evalyn

At the time of putting this album together, Evalyn was finding a lot of strength and solace in holistic therapies like mindfulness and sound healing, so she wanted to infuse those things into the music, “It feels really special to be able to share this with listeners since it was so healing for me to write it,” Evalyn says.

“I Love You, Keep Going” is something Evalyn wrote to sign off her journal entries for years. It was always a little way to remind herself that everything is okay even when it doesn’t feel like it is and to keep putting one foot in front of the other.

“The phrase has meant so much to me and I wanted to put those words back out in the world,” Evalyn explains on the EP’s title. “The whole EP is just that – a reminder that we’ve got each other, we’re not alone, we are loved, and to keep going.”

“I don’t think I even knew for sure that these songs would see the light of day at the beginning of the process,” Evalyn explains on the initial creative process. “I had taken a break from writing for my own project and was focused on writing for other bands and artists, but sometimes I would wind up in conversations with collaborators about mental health and we would write something that felt healing to us.”

After a while, a whole new collection of songs started to form for Evalyn. It was very organic for her, and in that way, she thinks this EP really did end up in line with the original intention, which was to make music that felt good to people in the room.

In the past, Evalyn often wrote music that had a strong attitude, “I love music that exudes confidence and sex appeal and drama, so I created songs about heartache, lust, and pain. Sometimes that was also a bit like hiding behind a character,” she explains. “With this new EP, I took pretty much the opposite approach and wrote with my heart on my sleeve about mindfulness, forgiveness, and gratitude.”

Working through my own mental health and creating these new songs were intrinsically connected. I would go to a sound bath one night and bring an idea from it to the studio the next day. — Evalyn

“I drew inspiration from meditation, from what I was hearing in yoga, and from phrases I was trying to say to myself when I was struggling the most,” Evalyn reveals on the creative process of the four-track release. “Everything that helped me, I wanted to put in the music somehow to share with anyone who needed to hear it.”

Of which songs on the EP Evalyn recommend you listening to – not that you shouldn’t just listen to them all – she would recommend listening to the above song, Under the Same Stars because it is a moment of gratitude during a dark time, “And then I would listen to “All We Have” because that is a mantra I tell myself all the time – this is all we have. It’s a reminder to be present, to be here in the moment,” Evalyn adds.

“I want listeners to hopefully feel some of the calming effect that the music was intended to have,” Evalyn states on what she wants listeners to take away from her EP. “I’d love for anyone who is listening to feel a little of the uplift I was looking for when I wrote them, and to hear the songs as a reminder to keep going.”

These four songs are the first half of Evalyn’s full-length album, which will be out later this year. Evalyn explains, “I think these first four are a great introduction to this sonic world of ILYKG, but there are a lot of songs on the full length that expands upon these themes and that I’m so excited to share with listeners.”

Next up, Evalyn will be releasing some remixes that she is very excited about. Beyond that, she is working on a master’s in Clinical Psychology right now.

“I really wanted to have a more thorough understanding of mental health and therapy as I strive to create music that feels healing and therapeutic. And I’m finishing the album and working with a number of artists I feel really inspired by, so excited to have all of that music out in the world,” Evalyn concludes in our chat.