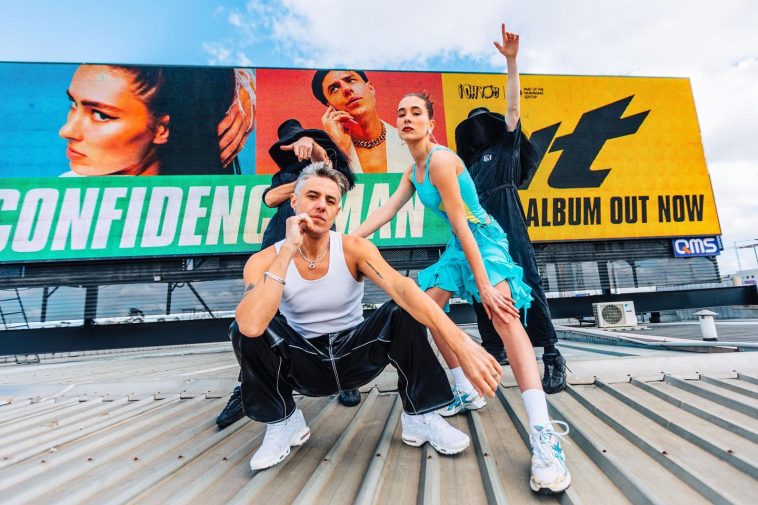 “We are Janet Planet, Sugar Bones, Reggie Goodchild and Clarence Mcguffie,” Confidence Man tell CelebMix at the top of our Q&A for their debut album. “We were drunk and thought, yeah that’s a great band name, we’ll take it thanks.”

Writing this album was a little different for Confidence Man, as they were in a 270-day lockdown in Melbourne, Australia at the time, and had their world tour cancelled. So, writing a party album seemed next to impossible at first for the group.

“We slapped ourselves out of the gloom pretty quick though,” Confidence Man continue. “We realised we’d never have this much time again so we better use it.

The next year and a half were kind of like the film Groundhog Day for the band. Somehow they did it.

Looking back [we] think it’s a testament to the power of the human spirit; a reminder that music can transcend and take us all to a better place.

Did either of you learn anything about yourselves – either collectively or individually – whilst looking back upon your work?

I think it just confirmed that we were individually and collectively on the right path. Managing to produce in that situation was hard, but we’ve all got each other’s backs and that is real power.

What is ‘TILT’ about, and what does the title represent?

Tilt is about putting your hands up and having a damn good time. It’s an anthem for EVERYONE out there. Even if they’re a little off centre from the mainstream. Con Man has always pushed the envelope while appealing to the masses so it’s an evolution of that idea. We just wanna have fun and now, you can have some too.

Does the album still represent what you wanted to say at the start of its creative process, and how is that reflected in the final version?

We really had no idea what we were going to say in the beginning, and we didn’t want to restrict the process. Having so much time meant the album could find itself without us pushing or pulling too hard. It went through about three phases and came out just right.

What was the creative process like for the album and was it any different to how either of you went about working on previous material?

We were way more open than when we wrote the first album. Confidence Man already had an identity and we didn’t really want to paint it again. We wanted to paint a new picture. So we had to find what that next world was rather than establish the world. That freedom meant we could take it all the way to the next dimension.

Was there any material left off the album you wanted to include – lyrically or sonically?

There always is… it will just have to wait for the next album.

Which song, or songs, off the album would you recommend to listeners and why?

Yeah, we always spend several days debating the tracklist. It’s daunting at first but we always get there after a few drinks and arguments.

What do you hope listeners take away from your album?

We want them to feel happy, sexy, freaky, frisky, free and strong.