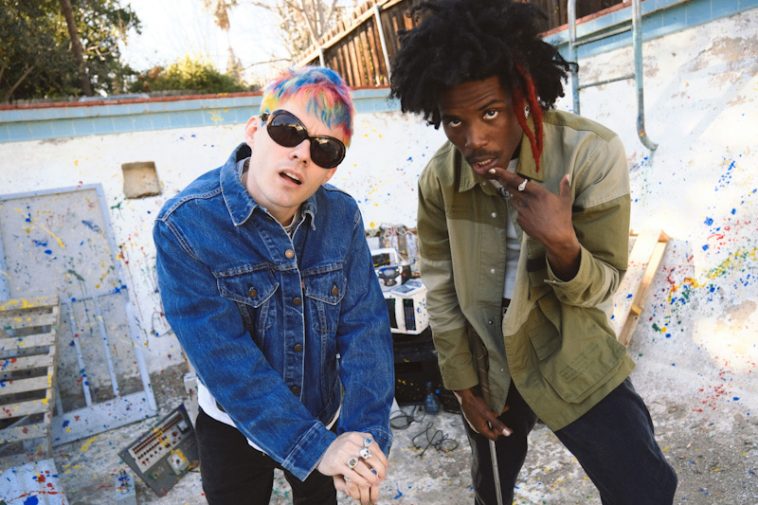 After teasing a collab for months, DE’WAYNE has finally released his song AND music video for “Perfume” with Waterparks’ front man, Awsten Knight! Combining elements of rock, industrial, and rap, his musical style is emotionally raw along with lots of soulful charisma.

Since he started making music, the singer and rapper has been blurring genre lines and breaking out of any box that he’s put into. With his electrifying stage presence and one-of-a-kind sense of style, including his iconic streak of red hair, DE’WAYNE is never afraid to be himself.

And one of the coolest things about him? He walks around with a smile so big that all of his happiness is instantly contagious. When talking to DE’WAYNE, you can’t help but feel like you’re talking to someone you’ve known for years.

With “Perfume”, he hopes to show that love doesn’t just manifest in one emotion, and that falling in love might not always feel like sunshine and rainbows.

A lot of people may recognize DE’WAYNE from when he opened for Waterparks on previous tours, such as the Entertainment Tour in 2018 and the FANDOM Tour in 2019. He has also mentioned that he did some backup vocals on the band’s album, FANDOM.

You can hear him on the tracks “War Crimes” and “Worst”!

We caught up with DE’WAYNE to discuss “Perfume”, his solo album, fans, and more.

First of all, congrats on “Perfume” getting 100K+ streams on Spotify already! Will you do anything special if it reaches your 1 million goal?

DE’WAYNE: Hii and thank you! When it reaches a million I’m not sure I can say what I’m going to do here exactly! But I will definitely be going out of my mind for sure!

You can help him reach the goal by streaming “Perfume” below!

What inspired you to start making music, especially music that’s such a mix of genres? We love it!

DE’WAYNE: I was never great at expressing my feelings and music gave me that comfort since 12/13. Growing up my family always played mad soul music and gospel around the crib and I think it’s really beautiful to mix things. When I arrived in LA I got turned onto alt music and I studied it religiously. In the past few months, those ideas have been coming together nicely.

Your years of friendship with Awsten Knight is so wholesome. Do you guys always usually send voice messages back n’ forth to each other when working on music? Or do you prefer working together in person?

DE’WAYNE: That’s my bby! So yeah when I’m really excited I send voice messages. I think it’s the best form of communication other than music because it’s so direct and vulnerable. We prefer both tbh. Either one works for us.

You mentioned that you cried in the car after hearing the completed song for the first time. What got you so emotional?

DE’WAYNE: Because it sounded like a song I would hear on the radio! But it was from me you know? Like I make music I wanna hear! Sometimes that can put you in a losing situation, but I’m always willing to take that risk. It legit made me emotional! I knew this would be the song that people would finally take me seriously on. So that was a bit of it too!

Do you have a favorite lyric from “Perfume”? Why’s it your favorite?

DE’WAYNE: Yes! “You’re so proud of everything that you do.” That’s me! Like I’ve always known I was gonna do it, I was just waiting for people to listen!

You told fans that “Perfume” was written about your high school love. What do you hope listeners learn from you after hearing the song?

DE’WAYNE: DON’T BE AFRAID TO FALL IN LOVE! Anything you put your heart into there’s a chance some really good art or a story will come from it!

You’ve mentioned that you and Awsten have enough songs together to make an EP. Would you ever officially record and release the tracks as an EP? We’d personally LOVE to see it happen!

DE’WAYNE: Hahaha! You will have to ask him that! I will say that even since “Perfume” released, we have more songs. :)

Are the other songs also love songs, or are they about a variety of topics?

DE’WAYNE: A variety, because I really prefer other topics to sing about.

Can you share a title to one of the other songs in your notes?

Whose idea was it to add the, “I don’t,” audio at the end of the video? We think that it ended the song and music video perfectly! Especially after witnessing all of the smashed objects throughout the video and the middle finger, haha.

DE’WAYNE: Glad you caught that. So Awsten just said that at the end of his verse and we kept it in! I love when random stuff like that stays in a record!

Speaking of the video, was there a specific reason for pink and blue being the colors for the backdrops?

DE’WAYNE: Blue has been my favorite color since I can remember. I just knew Awsten would look so pretty on a pink background.

Would you want to tour with Waterparks again when shows are back? It’d be cool to see you and Awsten sing “Perfume” together live!

DE’WAYNE: Probably not! They have taken me on some great tours that I’m so thankful for! But I wanna headline my own tours and play festivals. I would love to bring him out for his verse at a random city or maybe I could pop out and do it with him on a WP date.

What is one of the most rewarding comments that you’ve gotten from a fan who listened to “Perfume” so far?

DE’WAYNE: “I don’t know who the hell you are but this is my favorite song now.” Also, I love that people catch some of the very dark references in the song, that makes me happy.

We know you’re also still working on your solo album! If you could explain it to people in 3 words so far, what would they be?

Has the pandemic made the creative process for the album more difficult?

DE’WAYNE: Not at all because I’m so optimistic. I want to come out of it as one of the new artists everyone needs to go see!

Do you have any advice for your fans who want to pursue a career in the music industry?

DE’WAYNE: Don’t listen to anyone’s advice and truly study how to write music and how to perform.

What would you want to do as a career if you weren’t doing music?

DE’WAYNE: I’m really not sure because I’m quite sh*t at everything else!

We can’t wait to see what else DE’WAYNE releases this year! Be sure to stay updated on his socials (which can be found below) so you don’t miss any new announcements.

Till then, check out the music video for “Perfume”:

Did you love the song and music video for “Perfume”?