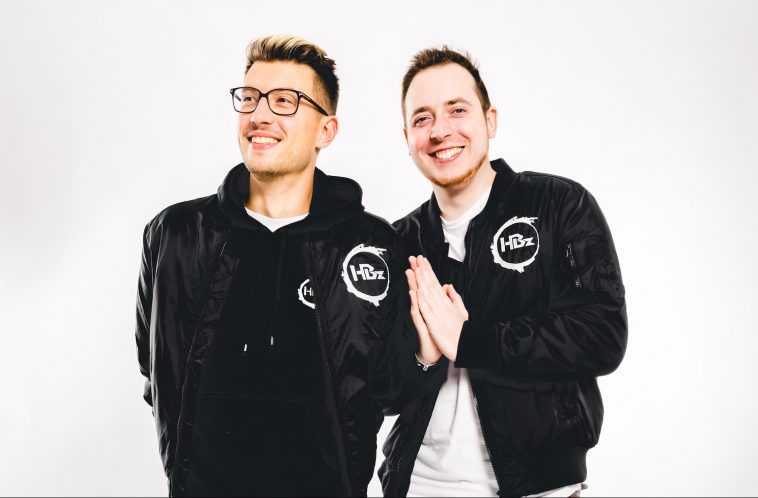 DJ & producer duo HBz (comprised of Niklas and Nils) are two passionate artists driven by a love for crafting a unique blend of electronic music. Forming in 2010 then duo clocked up a following thanks to bootlegs of ‘Cotton Eye Joe’, ‘Major Tom’ and ‘Greek Wine’, which h then found their way into DJs sets across festival and clubs. With over 800,000 subscribers on their YouTube channel and more than 650 million views, the duo has rapidly been making a name for themselves. Their latest single is a release with Dutch rapper and MC legend Jebroer and electronic artist DJ Blackbeard. HBz took some time out of their busy schedule to talk with us about this new single.

Congratulations on your new single ‘Rumble in The Jungle’ with Jebroer and DJ Blackbeard. How would you describe the track?

It’s a song about fighting, but not necessarily a fight of physical nature. The fight that each of us has with ourselves in our daily struggle to keep up with our own expectations, but also with the expectations and challenges the world brings upon us. Sometimes in life you must be brave and stand your ground. Rumble in the jungle is the soundtrack to that feeling.

How did you come to work with Jebroer and DJ Blackbeard?

We’ve worked with both Jebroer and DJ Blackbeard before. They are both very talented writers, performers, and producers, so it wasn’t a question of if, but of when we would do another track together.

‘Rumble in The Jungle’ sounds festival ready. When you produce do you have a live crowd in mind?

It depends on the track, but usually we do.
We played more than 100 shows this year, so the reaction of the audience to our music is not only important to us, but it also has a great influence on our approach to producing and writing music.

Out of all of your releases so far, which track do you think best represents the ‘HBz’ sound?

We’re not sure if there is that one track that sums it all up, since we move between genres a lot and love the fact that we are not restricted within that one certain genre. There are of course songs that fans all over the world strongly associate with us, for example “King Kong” or our version of “All the things she said”.

You’ve worked with some incredibly talented artists throughout the years, from Helene Fischer to VIZE. Who would be a dream artist to collaborate with and add to the list?

We’d love to work with DaTweekaz on a great Hardstyle track and with Timmy Trumpet on a great EDM or HardBounce track. Actually, we are working on both to make it happen.

With your experience in the music industry, what advice would you give to DJ/producers who are just starting out and would like to build a sustainable career in music?

Find what you love and what you are good at (only in rare cases it is/it doesn’t need to be both DJing and producing) and then practice, practice, practice. Don’t concentrate too much on what others are doing. Find people you can learn from, improve your skills and don’t let any push backs stop you. Furthermore we believe it’s important not to expect that huge life changing career. Be grateful for everything you accomplish and find happiness in the small things along the way.

What tracks do you have on repeat at the moment?

Niklas: I’d go with our unreleased version of “Spirit of the hawk” and Treams “München”. Much recommended!

Can you tell us what some of your highlights of 2022 have been?

This year has been incredible and there were so many unforgettable moments.
We played in the Olympia Stadium Berlin at Lollapalooza and got surprised during our set with our first and second gold award for “King Kong” and “Deine Augen”. At Veltins Arena Auf Schalke we played in front of a crowd of almost 50k people and in Spain we surprised HBz fans at their wedding with a show, which was an amazing experience. We are travelling all around and everywhere we go there are people that welcome us with open arms and so much love. That’s the biggest gift.

What’s coming up for HBz over the next year?

We are working hard to release an album called “Schmuggelware” (“Contraband”) next year, which will consist of many classic HBz Remixes that so far are only available on YouTube. Aside from that we’ll release a collab or two with some big names in the game and continue to remix as much as we can. We will also be playing many big festivals all over Europe and we’re already looking forward to that. 2023 will be pretty crazy and we are really excited.